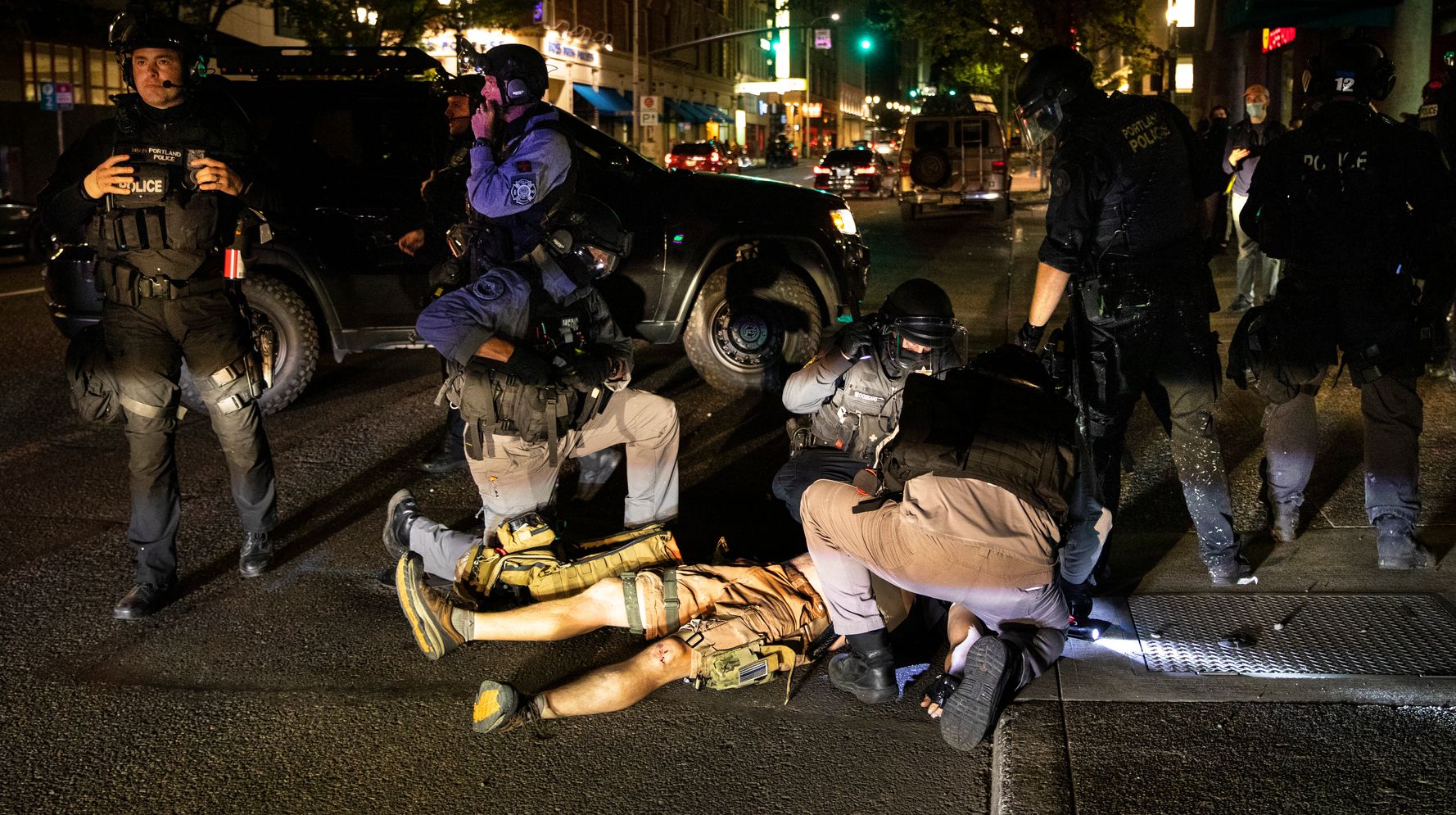 PORTLAND, Ore. (AP) — The founder of Patriot Prayer, a right-wing group whose supporters have frequently clashed with left-wing protesters in Portland, Oregon, said Sunday that the man fatally shot in Oregon’s largest city was a supporter of the group and a “good friend.”

Joey Gibson, head of the group based in Washington state, said he was also in Portland on Saturday night when supporters of President Donald Trump clashed with Black Lives Matter protesters in the streets of downtown. Gibson arrived at the scene of the shooting shortly after it happened and was briefly corralled in a nearby gas station by angry protesters.

“I can’t say much right now. All I can do is verify that he was a good friend and a supporter of Patriot Prayer,” Gibson said of the shooting victim in a text exchange with The Associated Press. He said he would make a fuller statement later Sunday.

Police issued a plea for videos, photos or eyewitness accounts of the killing late Saturday night, which happened about 15 minutes after a caravan of about 600 vehicles that were part of a pro-Trump rally left downtown.

It wasn’t clear if the shooting was related to the clashes between Trump supporters and counterprotesters in Portland, which has become a flashpoint in the national Black Lives Matter protests since George Floyd was killed in May and an increasing centerpiece in Trump’s law-and-order re-election campaign theme.

Police have not released any information about the case but said they were aware of videos on social media that showed the shooting.

“It is still early in this investigation, and I ask everyone to give the detectives time to do their important work before drawing conclusions about what took place,” said Police Chief Chuck Lovell.

“If anyone can provide information about this case, I ask them to please reach out to our detectives. This violence is completely unacceptable and we are working diligently to find and apprehend the individual or individuals responsible.”

An Associated Press freelance photographer heard three gunshots and then saw police medics attending to the victim, who appeared to be a white man. The freelancer said the man was wearing a hat bearing the insignia of Patriot Prayer.

Police said the man was shot in the chest. He was not immediately identified. It’s unclear who shot him.

Portland has been the site of nightly protests for more than three months since the police killing of Floyd in Minneapolis. Many of them end in vandalism and violence, and hundreds of demonstrators have been arrested by local and federal law enforcement since late May.

In the two hours following the shooting, protesters gathered downtown and there was sporadic fighting and vandalism, police said. Ten people were arrested, police said.

The caravan had arrived downtown just as a planned protest was getting underway. The chaotic scene came two days after Trump invoked Portland as a liberal city overrun with violence in a speech at the Republican National Convention. The caravan marked the third Saturday in a row that Trump supporters have rallied in the city.

The right-wing group Patriot Prayer has a history in Portland and has repeatedly rallied supporters for pro-Trump rallies beginning in 2017. The group was founded by Joey Gibson and is based in Washington state; supporters periodically cross into Oregon for rallies and marches.

Counterprotesters have squared off with Patriot Prayer and other right-wing groups such as the Proud Boys and the Three Percenters multiple times in the city since Trump’s election.

Photos and videos taken late Saturday show Gibson arrived at the scene shortly after the shooting, but it wasn’t immediately clear why he did so.

On Sunday, Trump issued a flurry of tweets and retweets including several that blamed Portland Mayor Ted Wheeler for the death and one in which the president appeared to be encouraging his supporters to move into Portland. Wheeler was expected to hold a news conference later Sunday.

“GREAT PATRIOTS!” Trump wrote as he shared video of his supporters driving into Portland to confront the protesters.

“I’m asking Portland officials, so that’s the mayor, that’s the governor and that’s local law enforcement, to do their job to address any violent activity that is occurring in their streets,” Wolf told CBS’ “Face the Nation.”

Wolf said the federal government was prepared to send agents to Portland and other cities to protect federal buildings and assist police.

When federal agents increased their presence in downtown Portland in July, the city saw some of the largest protests of the summer, with thousands of people turning out nightly. The crowds dissipated after the agents withdrew and State Police agreed to protect federal buildings for a two-week period.

Trump and other speakers at last week’s Republican convention evoked a violent, dystopian future if Democratic presidential hopeful Joe Biden wins in November and pointed to Portland as a cautionary tale for what would be in store for Americans.

The pro-Trump rally’s organizer, who recently coordinated a similar caravan in Boise, Idaho, said in a video posted Saturday on Twitter that attendees should only carry concealed weapons and the route was being kept secret for safety reasons.

The caravan had gathered earlier in the day at a suburban mall and drove as a group to the heart of Portland. As they arrived in the city, protesters tried to stop them by standing in the street and blocking bridges.

Video from the scene showed sporadic fighting, as well as Trump supporters firing paintball pellets at opponents and using bear spray as counter-protesters threw things at the Trump caravan.

The Black Lives Matter demonstrations usually target police buildings and federal buildings. Some protesters have called for reductions in police budgets while the city’s mayor and some in the Black community have decried the violence.