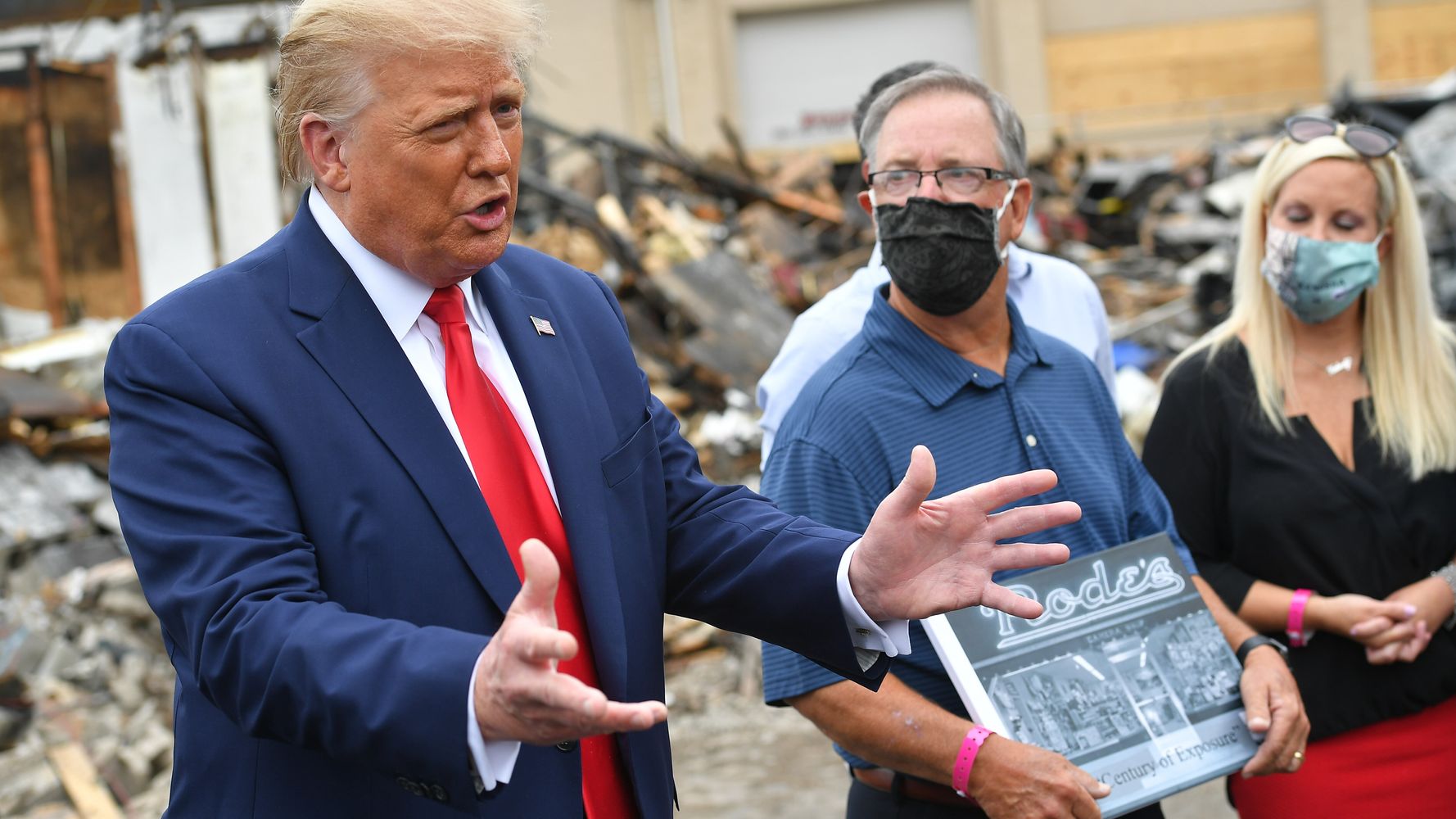 During a Tuesday visit to Kenosha, Wisconsin, President Donald Trump starred in a misleading photo op designed to heighten worries over anti-racist protests across the country and increase support for military-style crackdowns by the federal government.

The White House announced Trump’s Kenosha visit over the weekend, saying he would speak with local law enforcement and tour sites of property damage following major protests in the city. The protests had been sparked by anger and sorrow after police shot Jacob Blake, a now-paralyzed 29-year-old Black man, seven times in the back. But Trump didn’t speak to Blake’s family during the visit, according to media reports.

Instead, Trump’s visit was mostly focused on highlighting property damage, demonizing protesters and scoring political points with his base, an effort that included falsely claiming that a man invited to speak glowingly of him to the press was the owner of a destroyed business.

On Tuesday, the president repeatedly claimed that a man named John Rode III owned a camera business called Rode’s Camera Shop, which was set ablaze during protests last week. But Rode is not the owner of the camera shop, having sold the business years ago, according to local media. And the shop’s real owners, Tom Gram and Paul Willette, revealed to local media that they had refused to participate in what they both deemed a political stunt.

Gram, who told local news outlet WTMJ that the White House contacted him Monday to request he show off his now-destroyed shop alongside Trump, said the president’s past led to his refusal.

“I think everything he does turns into a circus and I just didn’t want to be involved in it,” Gram said.

Willette said that he refused the same request and that Trump was the sole reason.

“I said no, thank you — I didn’t want anything to do with President Trump,” Willette told the Milwaukee Journal Sentinel. “If it were any other president I would, but not this one. I can’t begin to describe my frustration with him. I politely declined coming down there. I didn’t want to be part of that fiasco.”

Still, Rode, who continues to own the property where the camera shop is located, was presented to the public as though he owned the business. On Tuesday, that misrepresentation was used to lend credence to Rode as he heaped praise on Trump.

“We’re going to help you. That’s a very, very complete rebuild we’re talking about down there,” he added.

“I just appreciate President Trump coming today; everybody here does,” Rode said. “We’re so thankful we got the federal troops here. Once they got here, things did calm down quite a bit.”

In fact, it was Wisconsin’s Democratic governor, Tony Evers, who declared a state of emergency and increased the number of National Guard troops deployed as protests ramped up Tuesday of last week, the same day the camera shop was burned. Trump, who has supported violent crackdowns on anti-racist protesters by both police and his own supporters, has repeatedly threatened to send in federal forces to try to dissuade protesters from gathering.