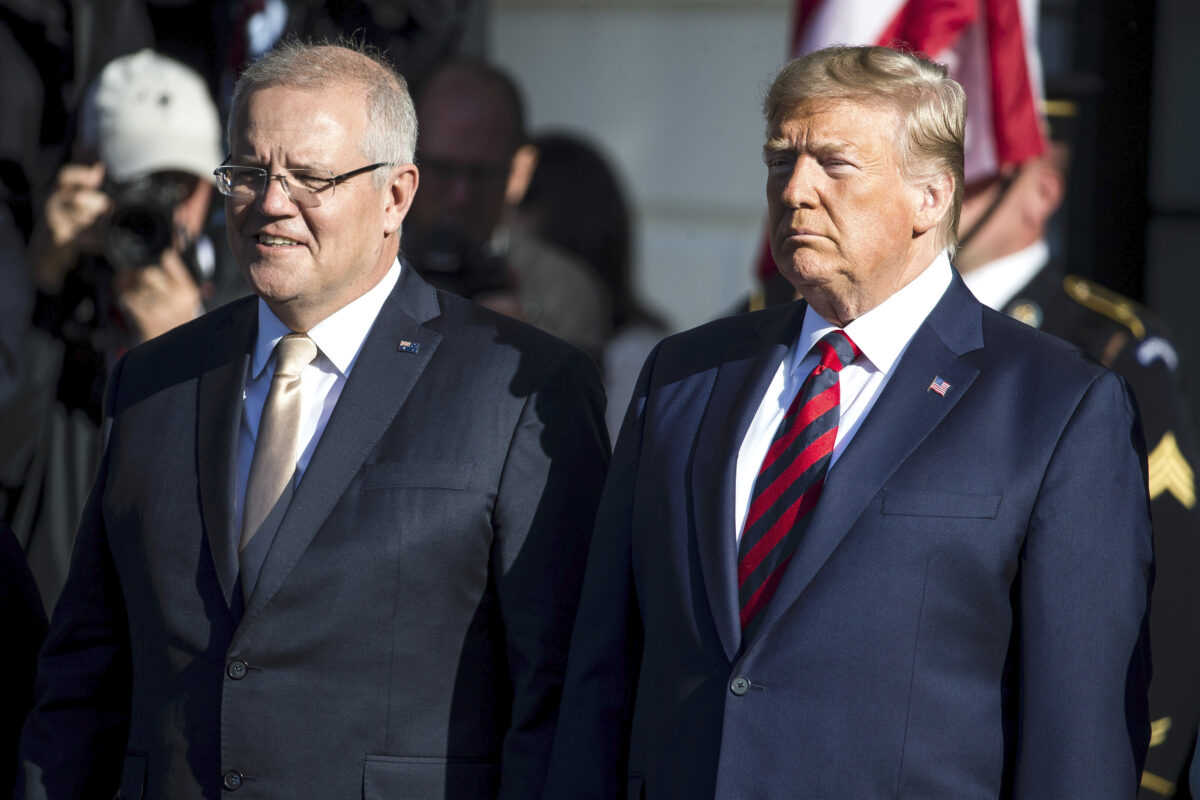 The New York Times ran a report late Sept. 30 citing two anonymous U.S. officials who said President Donald Trump “pushed” Australian Prime Minister Scott Morrison in a recent telephone call to help Attorney General William Barr in the Department of Justice’s (DOJ) probe into origins of the Russia investigation. One of the sources said that Barr had asked Trump to speak to Morrison.

The New York Times in its intro also editorialized that the conversation between the two leaders was “another instance of the president using American diplomacy for potential personal gain.”

Following the report, a number of details emerged that conflict with the Times’ insinuation that Australia had been “pressed” by Trump to cooperate with Barr.

A letter shared by a reporter from Australian news outlet Nine on Sept. 30 showed that Australia, under the leadership of Prime Minister Scott Morrison, had reached out and expressed its willingness to support the attorney general’s investigation into “the origins of the Federal Bureau of Investigation’s probe into Russia links to the 2016 U.S. election.”

The letter dated May 28 was addressed to Barr from Joe Hockey, the Ambassador of Australia to the United States, in response to the president’s comments that he hoped Barr’s team would “look at” Australia, and also the UK and Ukraine, “because there was a hoax that was perpetrated on our country.”

A report released by Mueller on April 18 after he took over the FBI’s investigation into alleged collusion between the Trump campaign and Russia, produced no evidence that Trump or his campaign had knowingly conspired or coordinated with the Russian government to sway the outcome of the election in his favor.

“The Australian government will use its best endeavours to support your efforts in this matter,” Hockey wrote. “While Australia’s former high commissioner to the UK, Alexander Downer, is no longer employed by the Government, we stand ready to provide you with all relevant information to support your inquiries.”

Downer and his May 2016 meeting with former Trump campaign foreign policy adviser George Papadopoulos was reportedly one of the reasons the FBI gave for opening its investigation into the Trump campaign and its alleged ties to Russia.

“The Prime Minister [Scott Morrision] confirmed this readiness once again in conversation with the president,” the spokesperson said, referring to a phone call that was the subject of the New York Times’ report.

Morrison was elected by the people as Australia’s prime minister on May 18. He been serving as prime minister from Aug. 24, 2018, after former prime minister Malcolm Turnbull lost majority support in the center-right Liberal party leading up to the 2019 federal election.

DOJ spokeswoman Kerri Kupec confirmed on Sept. 30 that Trump’s call to Morrison was done at the request of Barr for the purposes of the investigation.

“As the Department of Justice has previously announced, a team led by U.S. Attorney John Durham is investigating the origins of the U.S. counterintelligence probe of the Trump 2016 presidential campaign,” Kupec said.

“Mr. Durham is gathering information from numerous sources, including a number of foreign countries. At Attorney General Barr’s request, the president has contacted other countries to ask them to introduce the attorney general and Mr. Durham to appropriate officials.”

In early May, Barr appointed Durham to examine the origins of the Russia-Trump collusion investigation and determine if intelligence collection on the Trump campaign was “lawful and appropriate.”

Trump delegated to Barr the authority to declassify any document he needed as part of the investigation on May 23. The president had not ordered the declassification earlier, explaining that “key allies” had called him and asked not to release the documents.

I met with the DOJ concerning the declassification of various UNREDACTED documents. They agreed to release them but stated that so doing may have a perceived negative impact on the Russia probe. Also, key Allies’ called to ask not to release. Therefore, the Inspector General…..

Trump’s reference to “key allies” suggested that the documents to be released may include damaging information on the governments involved.

The New York Times said in its report that Trump’s latest request to Morrison was “in effect asking the Australian government to investigate itself.”

Downer, in an interview with The Australian newspaper in 2018, claimed that Papadopoulos in May 2016 told him that Russia might use “damaging” material they had on Hillary Clinton in the lead-up to the 2016 presidential election. Downer said he was the one to pass that information back to the Australian government “the following day or a day or two.”

According to a diplomatic source quoted by the Wall Street Journal, Downer was also the one to pass on Papadopoulos’s Russia information directly to the U.S. ­embassy in London.

But Papadopoulos has refuted Downer’s claim that he was the one to inform Downer about Russia’s alleged possession of thousands of Clinton’s emails.

Papadopoulos said that he believes Downer’s claim about the email information—which was actually revealed to him by a Maltese professor Joseph Mifsud who has since been accused of working for the FBI and Western intelligence agencies—was part of an elaborate plan by anti-Trump intelligence operatives within Australian and British intelligence to frame him and provide the FBI with the reason to proceed with investigations of the Trump campaign in late July 2016.

Downer maintains that his role was simply to pass on what Papadopolous told him.

“I had a conversation with this guy and I passed on one element of the conversation to the Americans. There’s just nothing more to it,” Downer said on Oct. 1, according to AAP. “I know nothing about conversations about that Scott Morrison has had with the Americans, including President Trump, about this.”

Papadopoulos, who had downplayed his contacts with Mifsud to the FBI, served 14 days in prison in 2018 for lying to the FBI as part of a plea deal with Mueller.

Papadopolous on Oct. 1 wrote on Twitter: “First, I testified against both Downer and Mifsud a year ago to help launch Durham’s investigation. Now, the fruit of that accurate testimony is exposing the global nature of the attempt to set up the 2016 campaign and interfere in the democratic process. Was my patriotic duty!”

He also posted a photo of Downer and former Cambridge academic and FBI informant Stefan Halper, with a message that read: “Here is the Clinton errand boy, Alexander Downer, with the walrus, Stefan Halper, a week before both were sent to spy on me. Both are just now going to be exposed for the world to see.”

Correction: The previous version of this article incorrectly noted the timing of President Donald Trump’s holding back on declassification of the 2016 presidential campaign surveillance documents. Trump said he had been called and asked by “key allies” not to carry out declassification prior to May 23, 2019. The Epoch Times regrets the error.

Epoch Times reporter Melanie Sun and The Associated Press contributed to this report.

The Impeachment Story Is Simple. Republicans Are Trying To Confuse You.