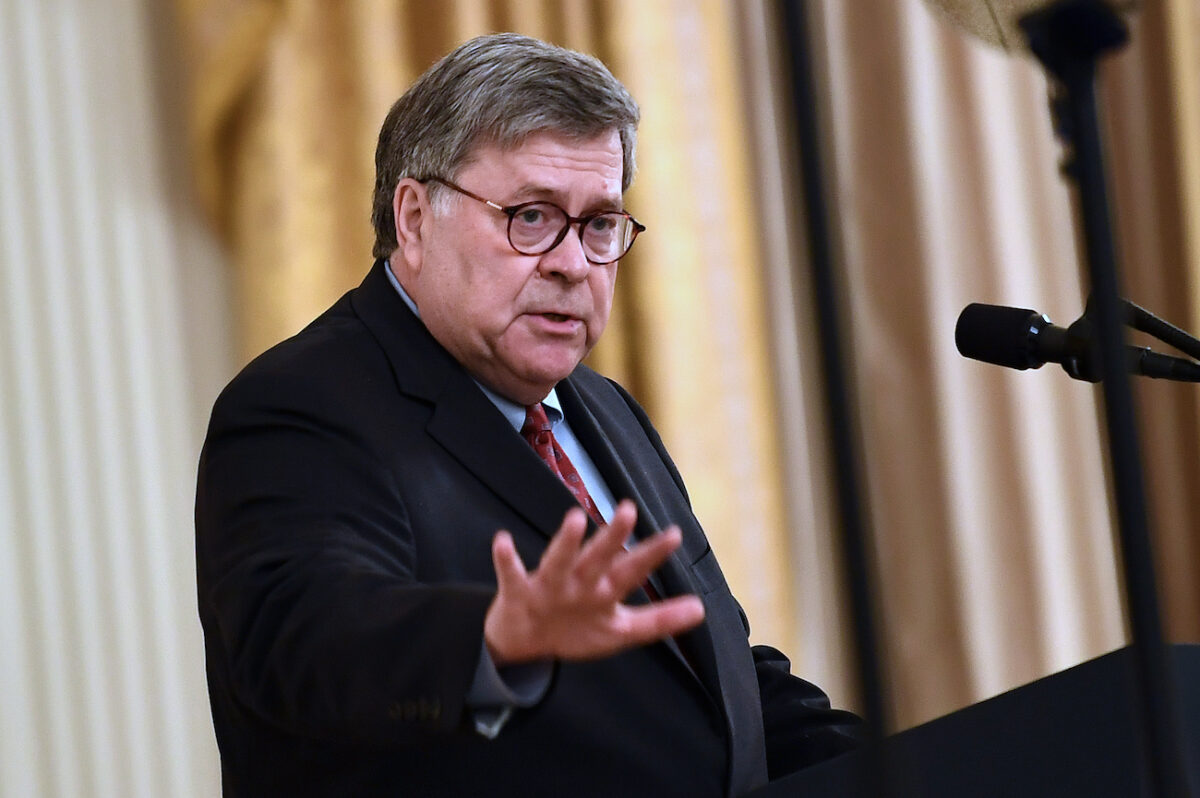 Barr spoke at a “Constitution Day” event hosted by Hillsdale College, a conservative Michigan institution, during which he commented on mandated lockdowns amid the CCP (Chinese Communist Party) virus outbreak.

“You know, putting a national lockdown, stay-at-home orders, is like house arrest. Other than slavery, which was a different kind of restraint, this is the greatest intrusion on civil liberties in American history,” Barr said.

The attorney general delivered a speech at the event, in which he focused on the role of the Constitution and Bill of Rights in ensuring equal treatment under the law and a bulwark against state oppression.

“The great guarantees of the Bill of Rights—freedom of speech, freedom of religion, and the right to keep and bear arms, just to name the first few—are critical safeguards of liberty,” he said, according to prepared remarks.

“The rule of law is the lynchpin of American freedom. And the critical guarantee of the rule of law comes from the Constitution’s structure of separated powers. The Framers recognized that by dividing the legislative, executive, and judicial powers—each significant, but each limited—they would minimize the risk of any form of tyranny,” he added.

Barr then criticized what he said were attempts to politicize the justice system by the selective application of the law by progressive state and local district attorneys.

“It has become fashionable to argue that prosecutorial decisions are legitimate only when they are made by the lowest-level line prosecutor handling any given case,” he said. “Ironically, some of those same critics see no problem in campaigning for highly political, elected district attorneys to remake state and local prosecutorial offices in their preferred progressive image, which often involves overriding the considered judgment of career prosecutors and police officers,” he added.

“But aside from hypocrisy, the notion that line prosecutors should make the final decisions within the Department of Justice is completely wrong and it is antithetical to the basic values underlying our system,” Barr said.

In his remarks, the attorney general also criticized what he called “the criminalization of politics” in the form of media figures speculating that elected officials had committed “some esoteric crime.”

“Now you have to call your adversary a criminal, and instead of beating them politically, you try to put them in jail,” Barr said, adding that this type of approach stands in opposition to the spirit of the rule of law and democratic values.

The attorney general also said the proper role of elected officials is to serve as “the most basic check on prosecutorial power.”

“Political accountability—politics—is what ultimately ensures our system does its work fairly and with proper recognition of the many interests and values at stake. Government power completely divorced from politics is tyranny,” he insisted.

Barr also asserted his authority to intervene in politically-charged cases and, more broadly, hold prosecutors accountable to the public.

“Letting the most junior members set the agenda might be a good philosophy for a Montessori preschool, but it is no way to run a federal agency,” he said.

“In short, the attorney general, senior DOJ officials, and U.S. attorneys are indeed political. But they are political in a good and necessary sense,” he said in prepared remarks.