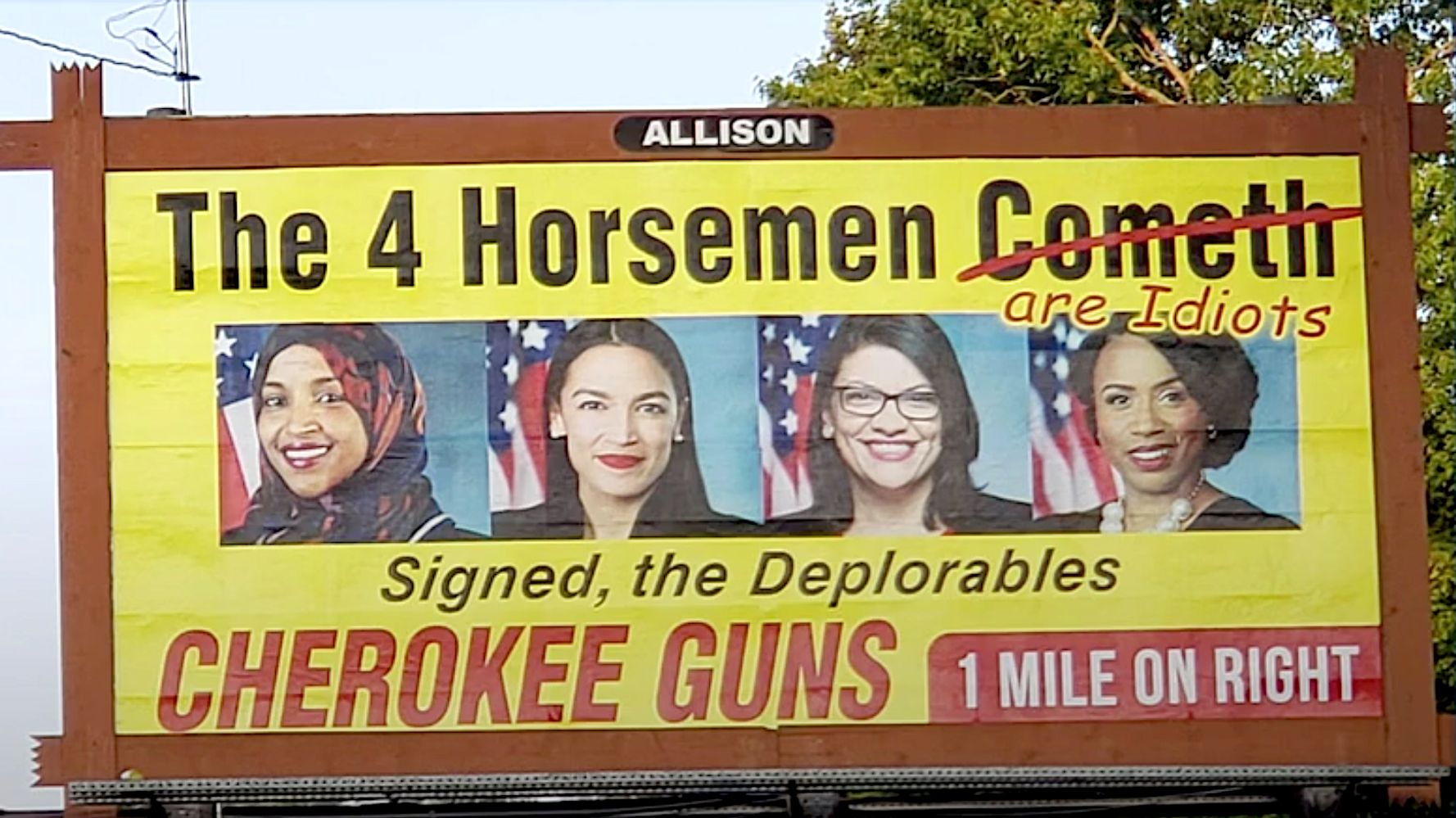 A North Carolina-based advertising company said it’s taking down a gun shop ad that disparagingly refers to four congresswomen of color as the “4 Horsemen” and “idiots.” Anti-gun violence and civil rights activists have lambasted the ad as “dangerous” and “violent.”

“The 4 Horsemen Cometh,” the ad reads, an apparent reference to the biblical four horsemen of the apocalypse. The word “Cometh” is crossed out in the ad and replaced with the words “are idiots.”

The Coalition to Stop Gun Violence condemned the language in the ad as “disgusting anti-government violent rhetoric.”

“Threats against members of Congress, particularly minority members are [on the rise] and it is driven by the president’s racial rhetoric,” the group wrote on Facebook. “This is dangerous!!!”

Muslim Advocates, a national civil rights organization, similarly censured the ad for promoting violence against the four congresswomen, who President Donald Trump recently said should “go back” to their countries of origin despite the fact that three of the four women were born in the United States and all four are American citizens.

There are already multiple credible assassination threats & attempts on these officials.

The media is irresponsibly downplaying this and calling it “mocking.”

In an age of white nationalist attacks and rampant gun violence, *this is not a joke.*https://t.co/Y6EkktqZYF

In the face of the fierce backlash, Allison Outdoor Advertising, the advertising company behind the gun shop ad, said on Wednesday that it would be taking down the billboard.

“For all those who has concern over the Cherokee Guns Artwork. The board is coming down,” the company wrote, according to NewsChannel 9. “This Creative never came on managements desk for approval. We understand this is a delicate subject and we greatly apologize for it ever going up.”

That original Facebook post appears to have been removed, but the company posted another message a few hours later saying the board “is coming down.”

The company gave no indication when the removal would take place.

The gun shop, located in the North Carolina town of Murphy, appeared unmoved by the backlash to the ad.

On Monday, the shop said it would be printing the same ad on bumper stickers, which it said it would give out to people for free.

“Due to OVERWHELMING demand,” the shop said on Facebook, “you may come by the shop (next week) and get your very own FOUR HORSEMEN COMETH STICKER…simple…eat a piece of bacon…tell us you’re voting for Trump in 2020…then get your limited edition bumper sticker!”

But, the post added, “snowflakes and Liberals are not eligible.”

Cherokee Guns did not respond to HuffPost’s request for comment late Wednesday.

A shop employee identified only as Butch told WHNS-TV that the ad was not fueled by hate or racism.

“That’s not what this is about … We’re putting facing the face of socialism out there so the American people can get a good look at it,” the employee said.