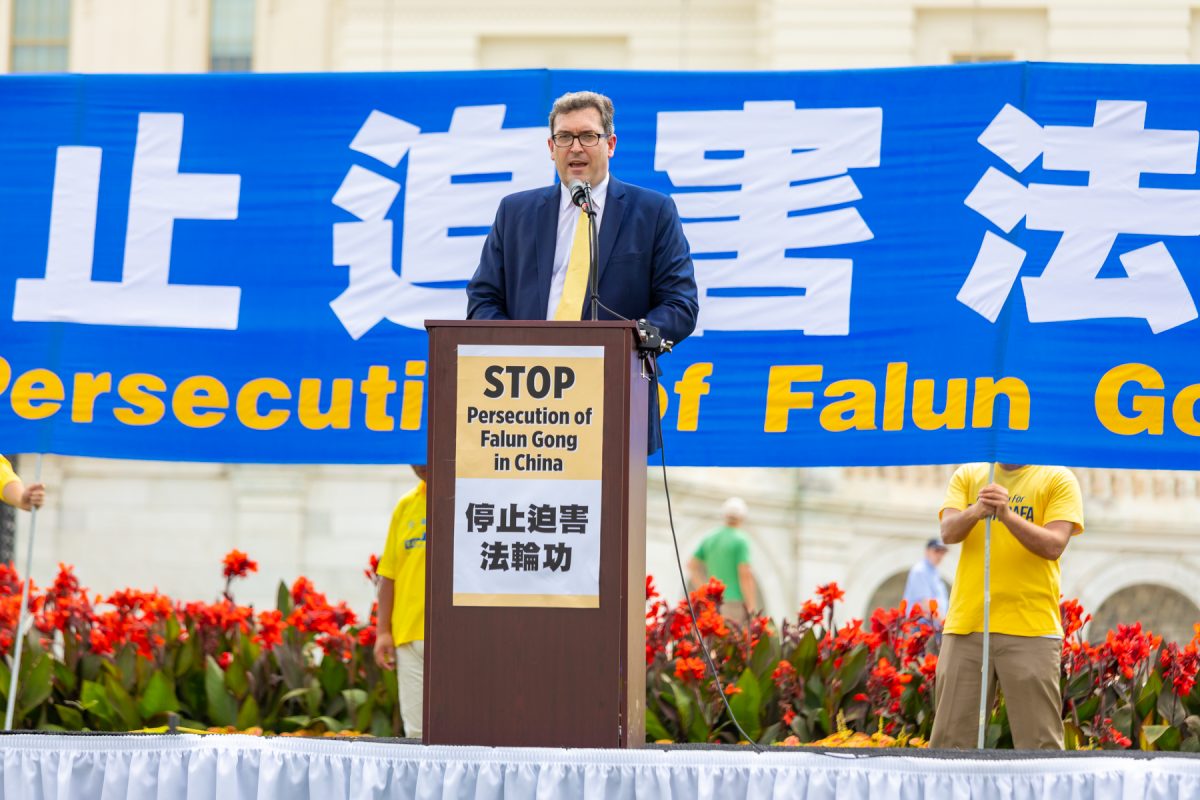 The Chinese Embassy in Britain made repeated attempts to pressure a prominent human rights advocate to stop criticising the Communist regime, it has been revealed.

“To their credit, all four members of Parliament made it clear to me they were not telling me to stop doing what I’m doing. They were just alerting me to the fact that they had been lobbied.”

Rogers believes this might serve as an indication of the extent of the regime’s infiltration in the UK. “If that’s going on just with me, I wonder what the full extent of it is,” he said.

Rogers is the primary author of a major new report published on Wednesday, which said the intensifying assault on human rights in China illustrates “the mendacity, brutality, inhumanity, insecurity, and criminality of the Chinese Communist Party (CCP) regime.”

The report (pdf), entitled “The Darkness Deepens: The Crackdown on Human Rights in China 2016-2020,” showed that China’s human rights situation has deteriorated dramatically further during the past four years, not only in the well-publicised cases of Hong Kong and the Uyghurs, but across the board with Christians, Falun Gong practitioners, Tibetans, human rights defenders, and lawyers also suffering worsening abuse.

In particular, Rogers said there has been growing evidence that the regime has been killing prisoners of conscience to harvest their organs for sale. The independent China Tribunal, chaired by Sir Geoffrey Nice QC, said in its 2019 verdict that forced organ harvesting continued to happen, and that it was a crime against humanity.

The verdict “changed the debate,” Rogers said, because “it’s made it much harder for sceptics to dismiss the claims.”

The CCP is not just a threat to the Chinese people. Rather, Rogers said, Westerners should also recognise that their liberties are also threatened by this regime.

The extensive use of forced labour in China has contaminated Western supply chains, he said, with slave labour “featuring a very significant role in the supply chains of at least 83 or more international brands, companies that consumers will all be familiar with throughout the Western world.”

While Chinese tech companies such as Huawei and Hikvision, are well known globally now, Rogers said “we should not forget that these companies are directly at the heart” of the CCP’s surveillance state, supplying the regime’s security services with facial recognition technology, drones, and other artificial intelligence.

The use of Chinese technology “poses a direct threat” to Western free societies, he said, but many countries “haven’t woken up to that.”

“We need more pressure on Western corporations to make sure that they either stop doing business with this regime or, at a minimum, to make sure that their supply chains, as far as possible, are not built on slave labour, and that we’re not using technology from these Chinese tech companies that are at the heart of the Orwellian surveillance system.”

Rogers stressed that the West should “stand up for our values in our academic institutions,” and should not allow them to be compromised by CCP funding or interference in the form of institutions like the Confucius Institutes, which are part of the regime’s propaganda apparatus.

“I know one or two individuals who have, on other issues in other parts of the world, taken a very good and strong line on human rights, but who happened to have been given an honorary professorship at Peking University,” he said. “And the moment they’re given that, their ego is flattered, and they lose all sense of defending their values.”

“So we need to be much more robust at resisting those sort of temptations and defend our values,” he said.

In Rogers’ view, the West has been ‘naïve’ and has “had our heads in the sand for too long.”

The Vatican’s agreement with the Chinese regime, reached in 2018 and renewed last year, is a case in point. “That agreement was presumably designed with the intention of improving the situation” in regard to Chinese Catholics’ right to practise their religion, but, he said, “the situation is has absolutely worsened.”

Likewise, Rogers found the European Union’s decision to reach an investment agreement with the Chinese regime “extraordinary,” as it came just days after the European Parliament passed a resolution calling for targeted sanctions on Chinese officials responsible for the atrocities against the Uyghurs.

“It was a decision made when the U.S. is in transition, and you would have thought the EU as an ally of the United States, would not undermine either the relationship with the existing administration in its final days, or undercut the new administration before it’s had a chance to make its position clear.”

The EU-China deal was not just criticised by the Trump administration, but was also condemned by Chris Patten, the last governor of Hong Kong, who is a former EU Commissioner and a supporter of the EU.

“It’s in our interest to stand up,” because “we see what happens when we don’t respond early on—you know, Sudetenland, Czechoslovakia, Poland, and then we found ourselves in a world war,” he said. “We need to act fast, before it’s too late.”

Rogers praised the Trump administration for its role in reshaping U.S. policy on China.

“Whatever other observations or criticisms of the outgoing president and administration people may have, I think the one policy area that I would really give him and the administration great credit for is having the courage to see the danger of the Chinese regime, the repressiveness of that regime, and not just the courage to see that and to say so, but to change policy as a result,” he said.

“I really applaud many of the things that the administration has done to move away from this naïve idea that you can just engage with such a repressive regime behind closed doors only with words,” he said. “Actually, what you need to get the message across is punitive measures, the kind of sanctions that the U.S. has introduced.”

Rogers said he hopes the new U.S. administration will continue that approach, as “perhaps one of the few areas of bipartisan consensus is on the China question.”

He said he thinks “it’s a good thing” that the Biden administration may try to take a more multilateral approach on China.

“I think the free world needs to stand together and form a united front to confront China’s united front, as long as that isn’t a lowest common denominator approach, as long as it’s a robust approach.”

But he said “multilateralism shouldn’t be at the expense of unilateral action where that’s necessary and justified.”

“It shouldn’t be the lowest common denominator. We should try to work together with allies across free countries as much as possible, but that shouldn’t excuse countries from taking their own action where that’s necessary.”