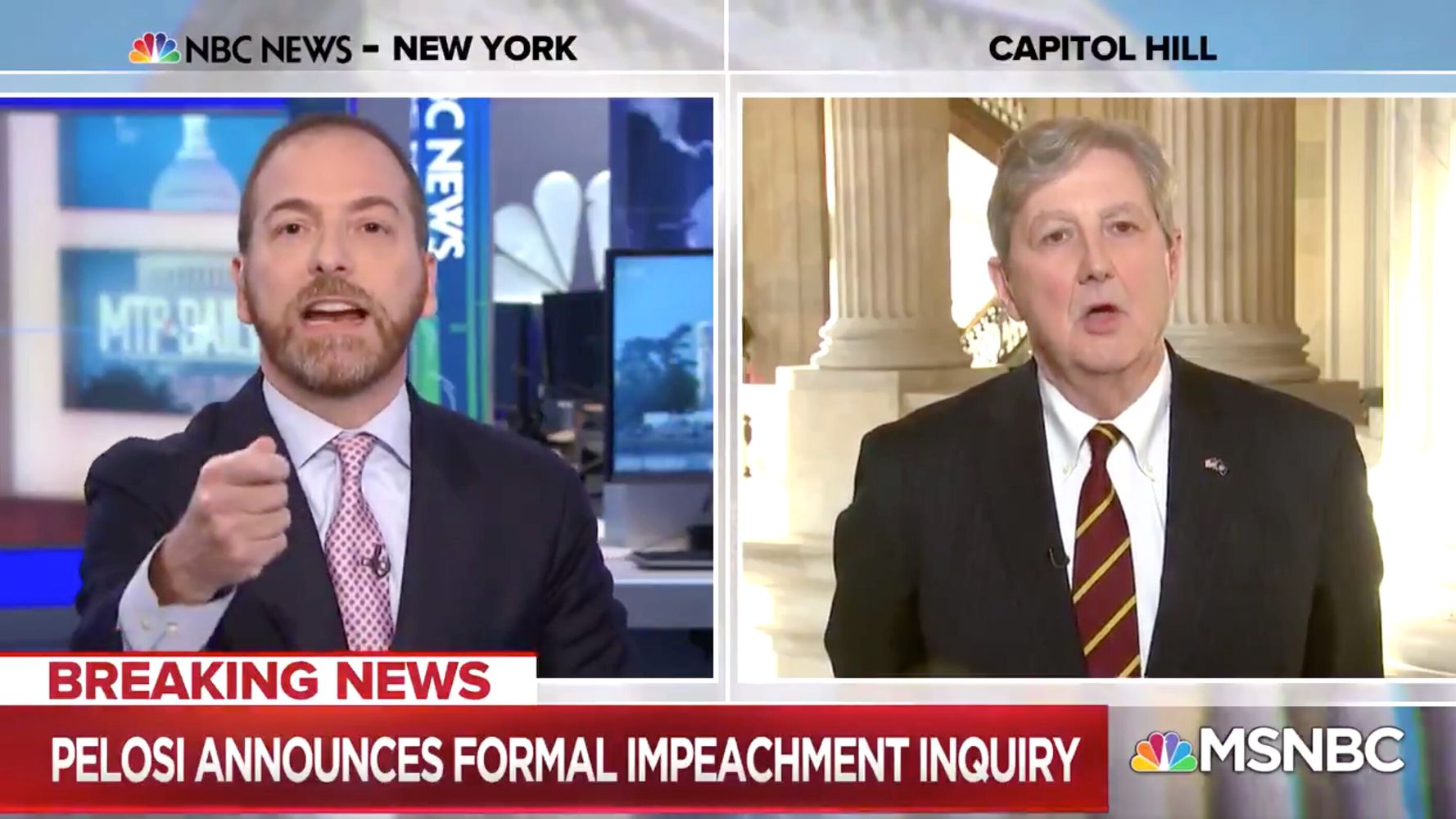 In a tense showdown over a newly announced impeachment inquiry into President Donald Trump, MSNBC’s Chuck Todd squared off with Sen. John Kennedy (R-La.), demanding he stop “gaslighting” the American public by ginning up suspicion of former Vice President Joe Biden’s past.

“You do realize you’re looking for an outcome, not the facts,” Todd told Kennedy in a Tuesday interview, referring to evidence-free theories that Biden and his son may have been linked to corruption in Ukraine.

As Todd pointed out, the rumor, which has been driven by Trump, personal attorney Rudy Giuliani and other presidential allies, remains unfounded by journalists and the Ukrainian government. Yet Kennedy was adamant in his demands that the matter be investigated.

“Maybe you’re right, maybe there’s magical missing information here,” Todd added. “But at some point, do you not accept all of these entities looking into it to have found the answer?”

Throughout the lengthy exchange, the senator made the argument that because the question had been raised by Trump’s supporters, it merits attention. Meanwhile he overlooked a whistleblower report allegedly flagging Trump’s July discussion with Ukrainian President Volodymyr Zelensky during which he is said to have requested help with a probe of the Bidens. Trump purportedly believed the move would help him secure the 2020 election.

“I’m not alleging the vice president did anything wrong,” Kennedy said. However, he remained firm in his calls for an investigation anyway.

“I’m not gaslighting you,” Kennedy said. “I’m telling you the facts. Do you deny those facts? Do you think they got Hunter Biden’s name off ZipRecruiter? I don’t. And I don’t think the American people do either.”

Kennedy was referring to Burisma Holdings, a Ukrainian energy firm with which Hunter Biden worked as a board member during his father’s vice presidency. At that time, Joe Biden was advocating ― along with the international community ― to oust the country’s then-prosecutor general, Viktor Shokin, who was leading a corruption probe of Burisma.

In May, one of Shokin’s successors, Yuriy Lutsenko ― who has now left the post ― told Bloomberg News, “Hunter Biden did not violate any Ukrainian laws ― at least as of now, we do not see any wrongdoing.”

As of Tuesday, nearly 200 House Democrats endorsed impeachment proceedings against Trump, being joined by House Speaker Nancy Pelosi (D-Calif.), who announced an inquiry on the basis that the president had committed “a violation of the law” in his conversation with Zelensky.

Trump has continually denied that his discussion was inappropriate, though on Sunday, he appeared to confirm that the Bidens came up in his talk, telling reporters the call concerned, in part, “the fact that we don’t want our people, like Vice President Biden and his son, creating to the corruption already in the Ukraine.”

Trump is expected to release a transcript of the call, though the whistleblower complaint ― which was given to Acting Director of National Intelligence Joseph Maguire ― remains hidden from Congress as lawmakers call for him to turn it over.