Congress Has Trump Whistleblower Complaint. Some Lawmakers Want You To See It, Too. 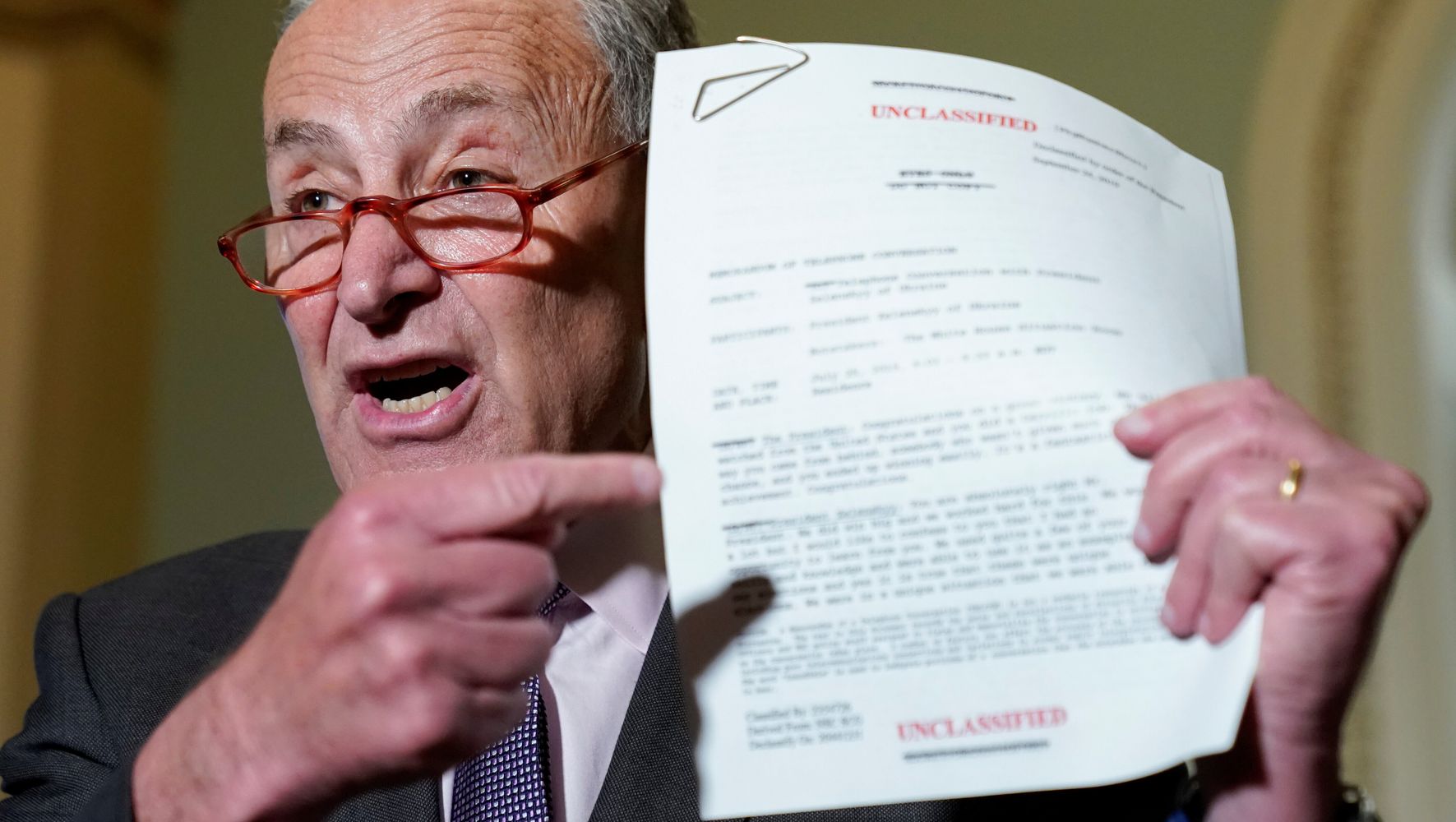 The complaint reportedly concerns a series of actions involving Trump, including a July 25 phone call during which Trump asked Ukrainian President Volodymyr Zelensky to investigate his 2020 political rival Joe Biden. The White House released a summary of that call on Wednesday morning and showed that Trump made the Biden investigation request shortly after Zelensky raised the topic of U.S. military aid to Ukraine.

The entire whistleblower complaint is even more troubling than the summary of the July 25 phone call, Senate Minority Leader Chuck Schumer (D-N.Y.) said on Wednesday.

That’s impressive, if true. The summary released by the White House showed definitively that Trump had asked Zelensky to investigate the former vice president ― and that he did so shortly after Zelensky thanked Trump for releasing U.S. military aid. It was a “classic Mafia-like shakedown of a foreign leader,” Rep. Adam Schiff (D-Calif.), chairman of the House Intelligence Committee, said Wednesday. “This is how a Mafia boss talks,” he added. ”‘What have you done for us? We’ve done so much for you, but there isn’t much reciprocity.’”

There is already bipartisan support for letting the public read the whistleblower complaint: Schumer called for it to be “made public immediately.” So did Reps. Elise Stefanik (N.Y.) and Chris Stewart (Utah), Republican lawmakers who oppose impeachment.

Although the White House and the Justice Department just gave up their fight to block the complaint from getting to Congress, it is unclear what the next step is. Trump is not required to make the still-classified document public. He may choose to do so ― his position is that he did nothing wrong. And he may view releasing the document as a way to make it more likely that the whistleblower’s identity will leak, allowing his allies to go after that person’s credibility.

But if members of Congress really believe the public has a right to know what the whistleblower reported to the intelligence community watchdog, they don’t have to wait for Trump to come around on the idea — they could make it happen on their own.

The House Intelligence Committee, which Schiff heads, can take a series of votes to disclose classified information if “the public interest would be served by such disclosure,” according to the rules that govern the committee. That’s how ranking member Devin Nunes (R-Calif.) pushed through the release of a bogus classified memo accusing the Justice Department and the FBI of inappropriately spying on a member of the Trump campaign.

If there aren’t enough votes on the House Intelligence Committee to release the whistleblower complaint, there is also a way for a single lawmaker to disclose classified information and avoid punishment. The rarely invoked Speech or Debate Clause in the Constitution provides members of Congress with immunity from criminal and civil prosecution for “legislative acts” — a vague term which refers to anything that is an “integral part of the deliberative and communicative processes” with respect to their jobs.

Before going to the media in 1971, Pentagon Papers whistleblower Daniel Ellsberg approached lawmakers and tried to get them to submit the documents into the congressional record. When they refused, Ellsberg leaked the papers to reporters. At the time, the Nixon administration sought an injunction and the case made its way to the Supreme Court. While the matter was still pending, Sen. Mike Gravel (D-Alaska) agreed to put the Pentagon Papers into the congressional record at a committee hearing. The Supreme Court later affirmed Gravel’s right to do so under the Speech or Debate Clause.

In 2012, then-chairman of the House Oversight and Government Reform Committee Darrell Issa (R-Calif.) leaned on the Speech or Debate Clause to put into the record details of secret wiretap applications related to the government’s “Fast and Furious” gun-tracking operation. A watchdog group filed an ethics complaint against him, but Issa was never prosecuted for disclosing the wiretap information.

Still, even with the Supreme Court’s ruling, members of Congress are extremely hesitant to disclose classified information. Sen. Ron Wyden (D-Ore.), an outspoken critic of the National Security Agency’s mass surveillance of American citizens, told the Rolling Stone in 2013 that lawmakers who think about themselves as government watchdogs consider reading information into the record “all the time.” He never invoked the Speech or Debate Clause, even when he knew Director of National Intelligence James Clapper lied about NSA surveillance during a hearing.

In 2014, then-Sen. Mark Udall (D-Colo.) considered using the Speech or Debate Clause to read into the record the Senate Intelligence Committee’s scathing report about the CIA’s torture and interrogation program. The committee released a redacted, unclassified version of the report later that year.