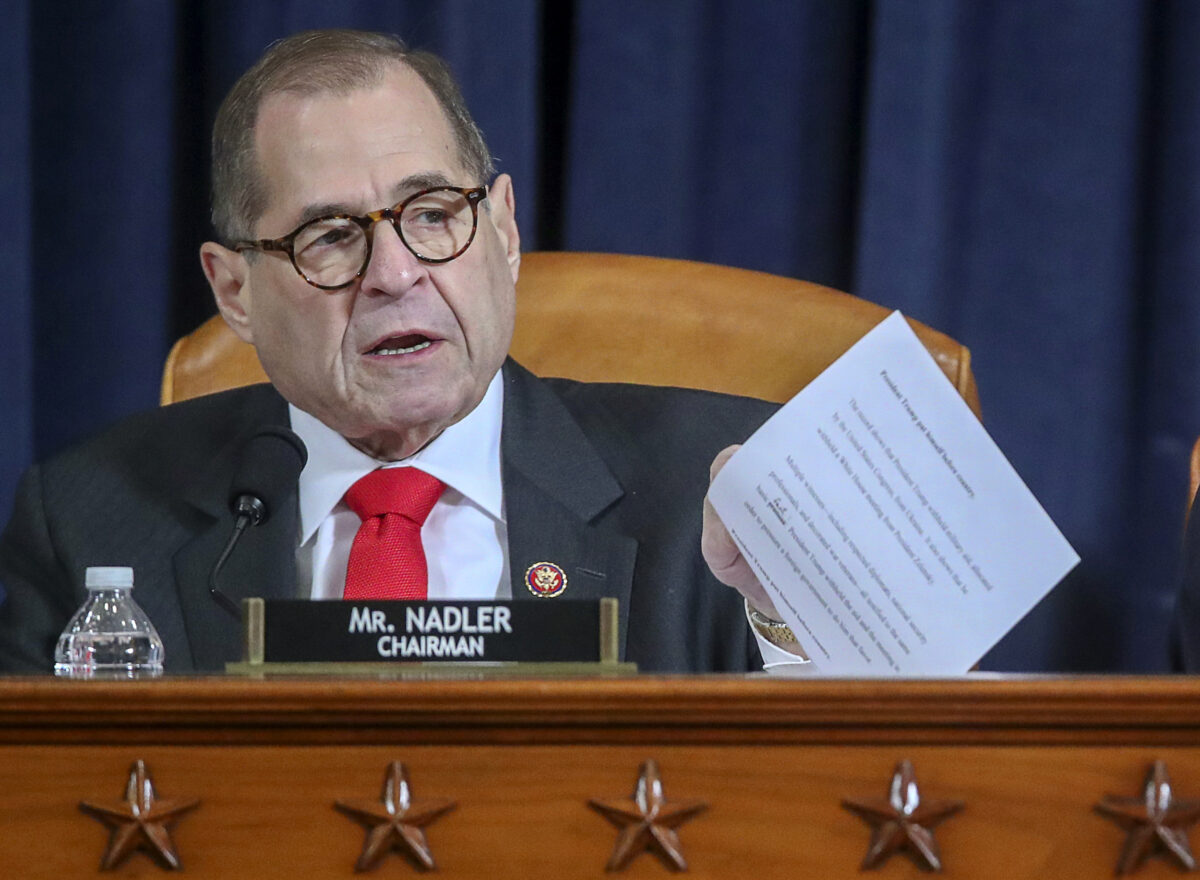 One top House Democrat proposed that the next Senate after the November election should pack the U.S. Supreme Court if Republicans nominate a replacement of the late Justice Ruth Bader Ginsburg.

“If Sen. McConnell and @SenateGOP were to force through a nominee during the lame duck session—before a new Senate and President can take office—then the incoming Senate should immediately move to expand the Supreme Court,” Rep. Jerry Nadler (D-N.Y.) wrote in a Twitter post.

The House Judiciary Committee chairman said that filling the vacancy left by Ginsburg during a lame-duck session is “undemocratic and a clear violation of the public trust in elected officials.”

“Congress would have to act and expanding the court would be the right place to start,” he added.

If Sen. McConnell and @SenateGOP were to force through a nominee during the lame duck session—before a new Senate and President can take office—then the incoming Senate should immediately move to expand the Supreme Court. 1/2 https://t.co/BDYQ0KVmJe

The Republicans and Democrats fall into a fierce battle over Ginsburg’s vacancy following her death.

Meanwhile, Democrats including presidential candidate Joe Biden, Senate Minority Leader Chuck Schumer (D-N.Y.) insisted the process should be postponed to some time after the November election and leave the nomination to the one who wins the presidency.

[email protected] We were put in this position of power and importance to make decisions for the people who so proudly elected us, the most important of which has long been considered to be the selection of United States Supreme Court Justices. We have this obligation, without delay!

The Democrats tried to assure the Republicans to follow the principle set during the nomination of Merrick Garland in 2016.

Garland was nominated by former President Barack Obama to replace Justice Antonin Scalia after he died. The nomination was blocked by McConnell who said that the Republicans wouldn’t consider Obama’s nominee because they felt the vacancy should be filled by whoever won the 2016 election.

However, McConnell said Friday the situation was different then because the Senate and the presidency were held by different parties. Republicans currently control both.

“In the last midterm election before Justice Scalia’s death in 2016, Americans elected a Republican Senate majority because we pledged to check and balance the last days of a lame-duck president’s second term. We kept our promise. Since the 1880s, no Senate has confirmed an opposite-party president’s Supreme Court nominee in a presidential election year,” he wrote in a statement right after Ginsburg’s death.

“President [Donald] Trump’s nominee will receive a vote on the floor of the United States Senate,” he said.

McConnell also rebutted the myth that there’s not enough time to finish the nomination process.

“Justice Ginsburg’s confirmation took only 50 days from the announcement of her nomination until her floor vote,” he wrote in a letter to his Republican colleagues citing Heritage Foundation analysis which says Supreme Court nomination takes 71 days on average.

Court packing indicates expanding the number of justices in the Supreme Court, which is nine currently. The term has been commonly used after former President Franklin Roosevelt proposed to increase justices of the Supreme Court from nine to fifteen.

After he won the presidency in 2016, Trump and Senate Republican Majority nominated and confirmed two conservative justices to America’s highest court. The Supreme Court leaned to the conservative side with a 5:4 majority after the new appointments.

Some progressive organizations floated the idea of packing the Supreme Court afterward.

In an open letter back in June 2020, several progressive groups including Progressive Change Institute, Demand Progress, and Friends of the Earth suggested Congress eliminate the conservative majority in the Supreme Court by packing.

“The fastest, most effective way … is to enact legislation increasing the size of the Court by at least two seats, and to quickly fill those seats with justices who will safeguard our democracy,” the groups wrote in the letter (pdf).