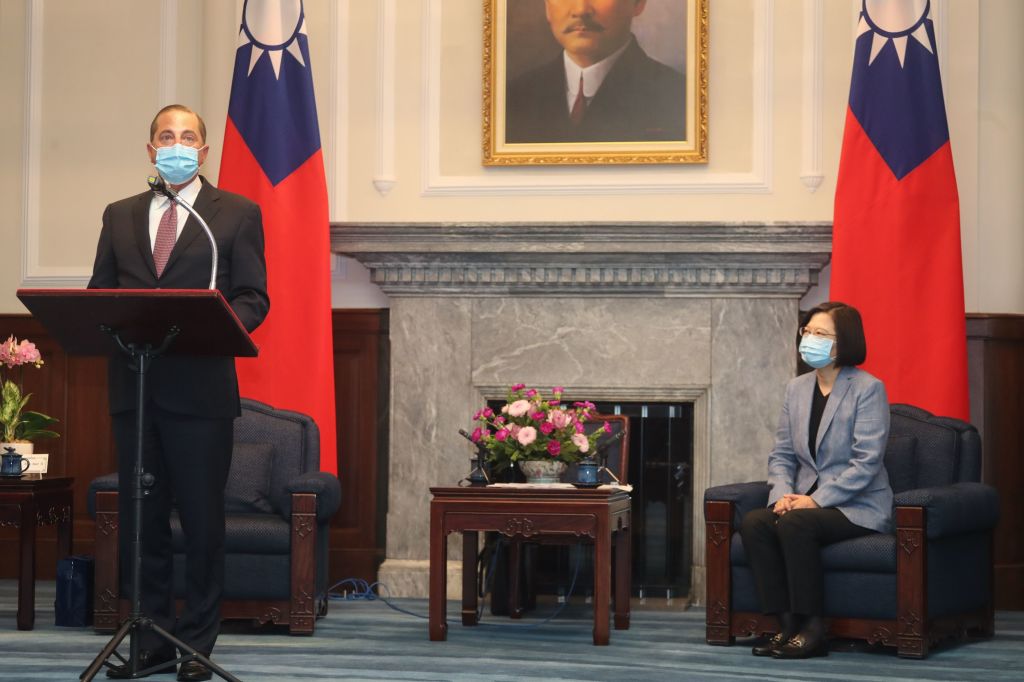 “It is a true honor to be here to convey a message of strong support and friendship from President Trump to Taiwan,” Azar said at a joint press conference with Tsai in Taipei Monday morning after flying in on Sunday.

Quoting from U.S. Secretary of State Mike Pompeo’s remarks in May congratulating Tsai on her second term in office, Azar added: “President Tsai’s courage and vision in leading Taiwan’s vibrant democracy are an inspiration to the region and the world,”

Azar’s trip to Taiwan carries political significance as the highest-level visit by a U.S. cabinet official since 1979—the year the United States severed official diplomatic ties with the island in recognition of Beijing.

Thank you, President Tsai, for welcoming me to Taiwan today. It is a true honor to be here to convey a message of strong support and friendship from the United States to #Taiwan. https://t.co/tsZTN9gp9T

Currently, the United States maintains a robust, nondiplomatic relationship with Taiwan, formally the Republic of China, and operates a de-facto embassy on the island known as the American Institute in Taiwan (AIT).

The U.S. government has also continuously sold military weapons and equipment to Taiwan for its self-defense against the communist regime in the Chinese mainland, which claims that the self-ruled island is a part of its territory.

“The particular focus of both my discussion with President Tsai and of our trip is highlighting Taiwan’s success on health in combating COVID-19, and cooperating with the United States to prevent, detect, and respond to health threats,” Azar said.

Taiwan had drawn international plaudits for its success in containing the CCP (Chinese Communist Party) virus, commonly known as the novel coronavirus. As of Aug. 9, Taiwan has 480 confirmed COVID-19 cases and seven deaths, despite its close proximity (81 miles) to mainland China.

The virus, which originated from China, has infected over 5 million individuals in the United States and been linked to over 162,900 deaths.

“Taiwan’s response to COVID-19 has been among the most successful in the world. And that is a tribute to the open, transparent, democratic nature of Taiwan’s society and culture,” Azar added.

The health secretary applauded Taiwan for “extending a help hand” to the United States and other countries by continuing to send personal protective equipment since the early stages of the pandemic.

“I look forward to using this visit to convey our admiration for Taiwan, and to learn about how our shared democratic values have driven success in health,” Azar said.

Azar also offered his condolences to people in Taiwan for the recent death of Taiwan’s former President Lee Teng-hui, who is also known as the father of Taiwan’s democracy.

Welcome to #Taiwan #US HHS @SecAzar & the @HHSGov delegation! We look forward to sharing our expertise, exchanging ideas about containing #COVID19, & strengthening our global leadership in promoting public health. https://t.co/1wDcJGqHuJ

Speaking at the press conference, Tsai again condemned Beijing for blocking Taiwan from participating in the World Health Assembly (WHA)—the decision-making body of the United Nation’s World Health Organization (WHO).

“I would like to reiterate that political considerations should never take precedence over the rights to health. The decision to bar Taiwan from participating in the WHA is a violation of the universal rights,” Tsai said.

Since 2017, Taiwan has been barred by Beijing from taking part in the assembly and its meetings.

Tsai welcomed Azar and his delegation, saying their visit will allow them to better understand Taiwan’s approach to containing the pandemic.

“The visit also provides us with an opportunity to speak face to face on issues of importance to both sides and find a direction for future cooperation,” Tsai said.

The Taiwan President also voiced her optimism on U.S.-Taiwan joint effort to develop and produce vaccines and medicines against the CCP virus. The two sides announced their joint cooperation on March 18.

“I trust that through joint endeavors, we will see even more breakthroughs and fruits of cooperation not only in the area of pandemic prevention, but on all fronts so that we can jointly contribute to the sustained peaceful development of the Indo-Pacific region,” Tsai concluded.

According to Taiwan’s government-run Central News Agency, Azar is also scheduled to meet with Taiwan’s Minister of Health and Welfare Chen Shih-chung and visit Taiwan’s Central Epidemic Command Center, a government agency tasked with dealing with the pandemic.

Additionally, Azar will also attend a memorandum of understanding signing ceremony between AIT and the Taipei Economic and Cultural Representative Office (TECRO)—the name for Taiwan’s de-facto embassy in the United States.