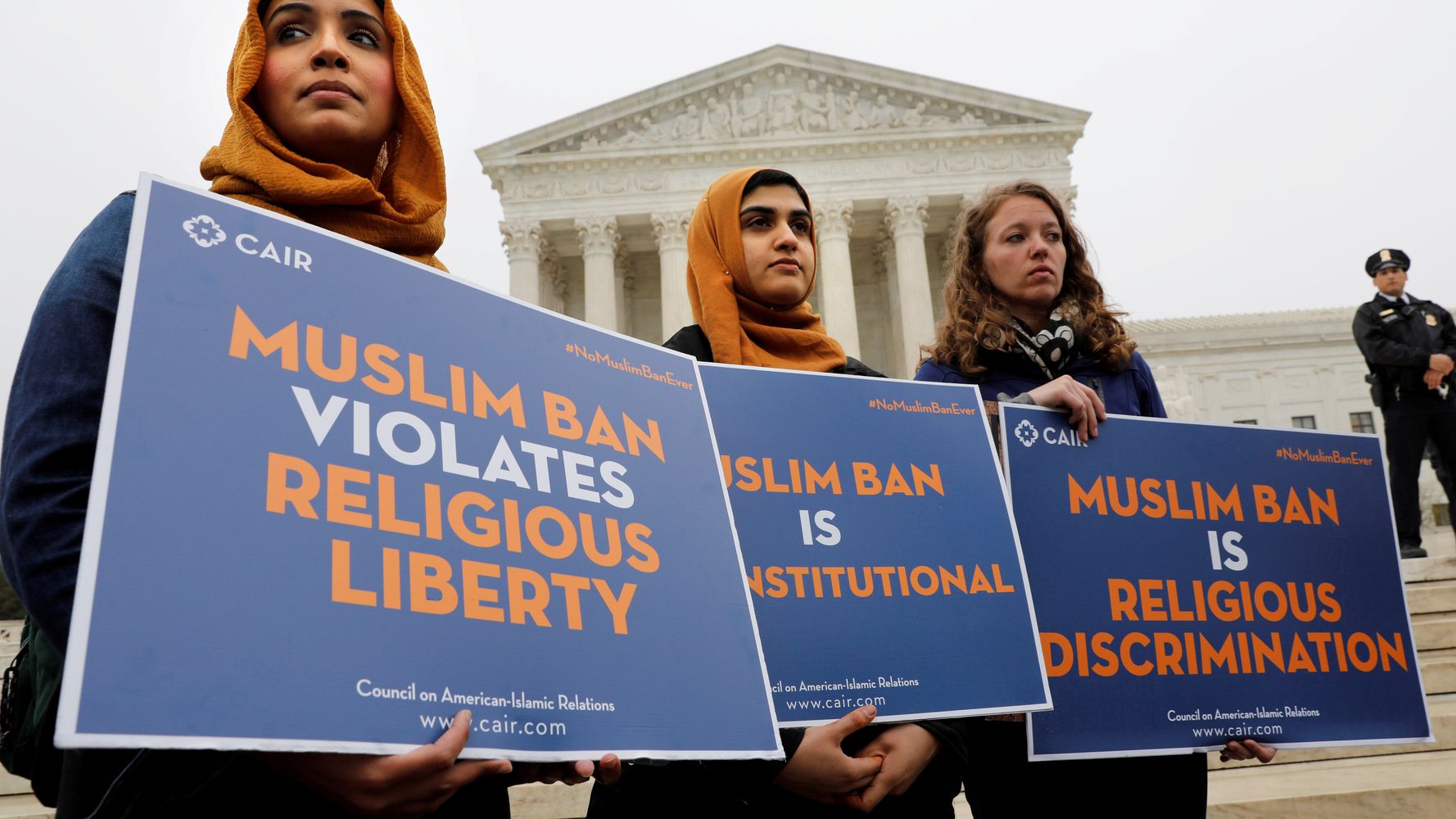 The Democrat-led House of Representatives passed a bill on Wednesday that would end President Donald Trump’s travel ban on several Muslim-majority countries, and ensure neither he nor any other president could do the same again.

The bill passed in a 233-183 vote, largely on party lines. It’s almost certainly dead on arrival in the Senate, which is controlled by Republicans, not to mention at the desk of a president who vowed to ban all Muslims as a candidate and ultimately settled on a travel ban for certain nations.

But activists said the vote was an important step toward doing away with a ban that has kept families apart, contributed to significant emotional distress and left people in dangerous conditions overseas.

“This vote marks the beginning of the end of the Muslim ban — a cruel policy that continues to tear families apart. Now we must take the fight to the Senate where we refuse to stop fighting until every senator hears from us and the bill lands on the president’s desk,” said Farhana Khera, the executive director of civil rights organization Muslim Advocates.

The No Ban ― or National Origin-Based Antidiscrimination for Nonimmigrants ― Act would immediately terminate Trump’s travel ban and limit the powers of future presidents from instituting similar bans. The vote was originally scheduled for March but was delayed after Republican critics argued that the bill would impede the government’s ability to respond to the coronavirus pandemic. The bill’s latest version was amended to include a clarification that allowed a president to bar entry in the interest of public health, such as during the current coronavirus pandemic.

The travel ban, which has been in effect in some form since Trump’s first year in office, is discriminatory and has done serious damage to Muslims in the U.S. and abroad, according to Democratic proponents of the bill and advocacy groups.

“The Trump administration has demonstrated a reckless and cruel abuse of power by issuing bans for the sole purpose of shutting out communities of color, fulfilling Trump’s signature and racist campaign promises,” said Marielena Hincapié, executive director of the National Immigration Law Center, one of the organizations that makes up the No Muslim Ban Ever coalition. “Today is a crucial step towards undoing the tremendous harm this administration has inflicted on our communities.”

Although the bill has strong support from Democrats in the House and Senate, the likeliest avenue for overturning Trump’s travel ban is to get him out of the White House.

Presumptive Democratic presidential nominee Joe Biden told Muslim Americans on a Zoom call earlier this week that he would repeal the ban on the first day of his administration if he was elected president.

“I will end the Muslim ban on day one,” the former vice president told the 3,000 attendees of the Million Muslim Votes Summit, hosted by Emgage Action, the nation’s largest Muslim American political group. The group endorsed Biden in the general election earlier this year.

“Muslim communities are the first to feel Donald Trump’s assault on Black and brown communities in this country with his vile Muslim ban,” Biden said.

Wa’el Alzayat, CEO of Emgage Action, said Biden’s vow to end the ban and speak directly to Muslim American voters was particularly noteworthy given the history of Islamophobia from not just the Trump administration but both parties over the past two decades.

Since the current legislation to end the ban is unlikely to be embraced by the Republicans or Trump, “the most direct and effective way to repeal [the ban] is to elect a new president. So when somebody like Joe Biden says he will repeal it, it’s extremely important,” Alzayat told HuffPost. “That’s a promise he made and that’s a promise we know he will deliver.”

Trump has already made the bans a campaign issue. Last week, Trump attacked Biden for wanting to “end all travel bans, including from jihadist regions” and that reversing the ban would lead to “people that are going to come in and blow up our cities.”

Years Of Revisions And Expansions

Trump first signed Executive Order 13769 in January 2017 after calling for “a total and complete shutdown of Muslims entering the United States” during his presidential campaign. After signing the order, thousands took to airports across the country to protest the ban, calling it discriminatory.

The original ban, which has been revised several times and challenged repeatedly in federal courts, was then upheld in 2018 by the Supreme Court.

It wasn’t until nearly three years after the ban went into effect, and hundreds of thousands of families were separated, that Congress held a hearing in September 2019 and highlighted the No Ban Act. In February, the House Judiciary Committee voted 22-10 to terminate the ban.

That same month, Trump expanded his controversial travel ban and added several more countries, predominately Muslim and African countries. Advocates have since denounced the expanded ban, calling it both racist and Islamophobic.

Since the ban was first enacted, married couples have been torn apart and civilians seeking medical attention have been denied visas to enter the country for treatment. Some Americans were forced to make the difficult decision to leave the U.S. and move to war-torn countries just to be with their families. Even families with members working in the highest levels of the American government could not obtain a waiver and reunite with loved ones.

Out of 549 cases analyzed by the Bridge Initiative, a research project at Georgetown University that studies Islamophobia, at least one in four were children separated from their parents, and one in three were partners torn apart as a result of the ban. At least 6% of cases, including those involving children, were reported to result in individuals facing dangerous safety conditions as a result of the ban.

Nearly 12% of those impacted in the analysis reported anxiety, depression, and/or emotional distress as a result of the Muslim ban, according to the same report.

“For our community, yes, this will repeal the Muslim ban, but above all, we want to make sure that this presidential power is not going to be abused, so other communities do not have to feel the weight of this discrimination as we have,” said Iman Awad, legislative director of Emgage Action.