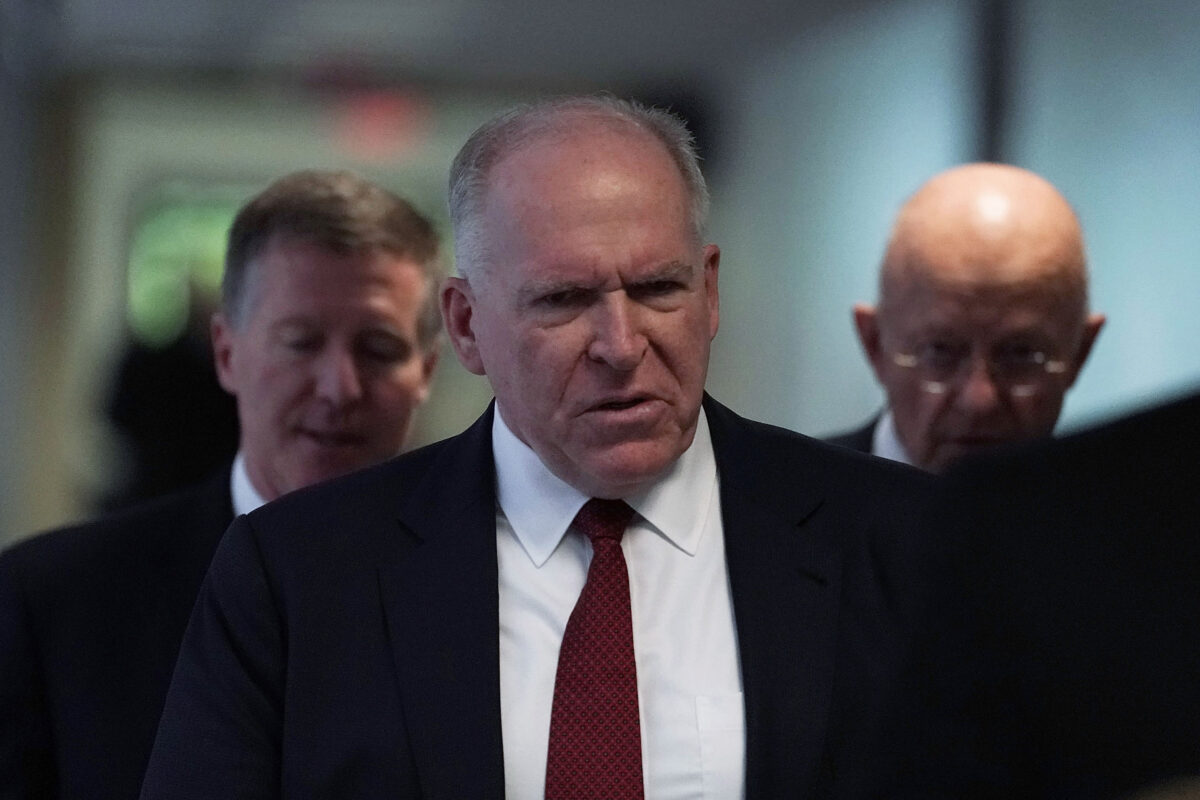 The special prosecutor investigating the spy operation against the Trump 2016 presidential campaign will question former CIA Director John Brennan, according to Brennan’s remarks aired on Oct. 2.

“I am supposedly going to be interviewed by Mr. Durham as part of this non-investigation,” Brennan said on MSNBC, referring to U.S. Attorney John Durham.

Brennan made the comments as news surfaced that Barr and Durham expanded their investigation overseas to Italy, Australia, and the United Kingdom. Roughly a week prior to Brennan’s comments, Barr and Durham spoke to senior Italian intelligence officials.

“I don’t understand the predication of this worldwide effort to try to uncover dirt, either real or imagined, that would discredit that investigation in 2016 into Russian interference,” Brennan said.

The Department of Justice did not respond to a request for additional information.

The FBI secured a secret court surveillance warrant in October 2016 to spy on Trump campaign associate Carter Page. While the extent of the surveillance granted by the Foreign Intelligence Surveillance Court is still classified, the warrant may have granted the FBI access to the records and communications of virtually every Trump campaign official.

Trump granted Barr the authority to declassify any document he deems necessary as he investigates the spy operation against his presidential campaign.

The FBI used a Hillary Clinton campaign-funded opposition research dossier on then-candidate Donald Trump as evidence in the warrant application. Former British spy Christopher Steele composed the dossier, paying second- and third-hand sources with ties to the Kremlin. The dossier made it to the FBI via several channels, including a field office in Rome, Italy.

Brennan told Congress in May 2017 that the dossier was “not in any way used as the basis for the intelligence community’s assessment” on Russia’s interference in the 2016 election. Former Director of National Intelligence James Clapper later appeared to contradict Brennan, telling CNN that the assessment corroborated “some of the substantive content of the dossier.”

Clapper confirmed to Congress in May 2017 that “European allies” passed intelligence to the United States about “about contacts between the Trump campaign and Russians.” Brennan told lawmakers later that month that any information the CIA received was shared with the FBI. That intelligence eventually served as the basis for the bureau’s counterintelligence investigation of the Trump campaign, according to Brennan.

“I was aware of intelligence and information about contacts between Russian officials and U.S. persons that raised concerns in my mind about whether or not those individuals were cooperating with the Russians, either in a witting or unwitting fashion, and it served as the basis for the FBI investigation to determine whether such collusion [or] cooperation occurred,” Brennan said on May 23, 2017.

Brennan has also confirmed that the CIA was scooping up intelligence on U.S. persons overseas and forwarding it to the FBI.

According to Rep. Devin Nunes (R-Calif.), the intelligence the FBI used to open the investigation of the Trump campaign was not considered “official intelligence.”

The FBI investigation eventually evolved into the special counsel probe led by former FBI Director Robert Mueller. In March, Mueller concluded the investigation after 22 months, finding insufficient evidence to establish that either Trump or anyone on his campaign colluded with Russia to interfere in the 2016 election.