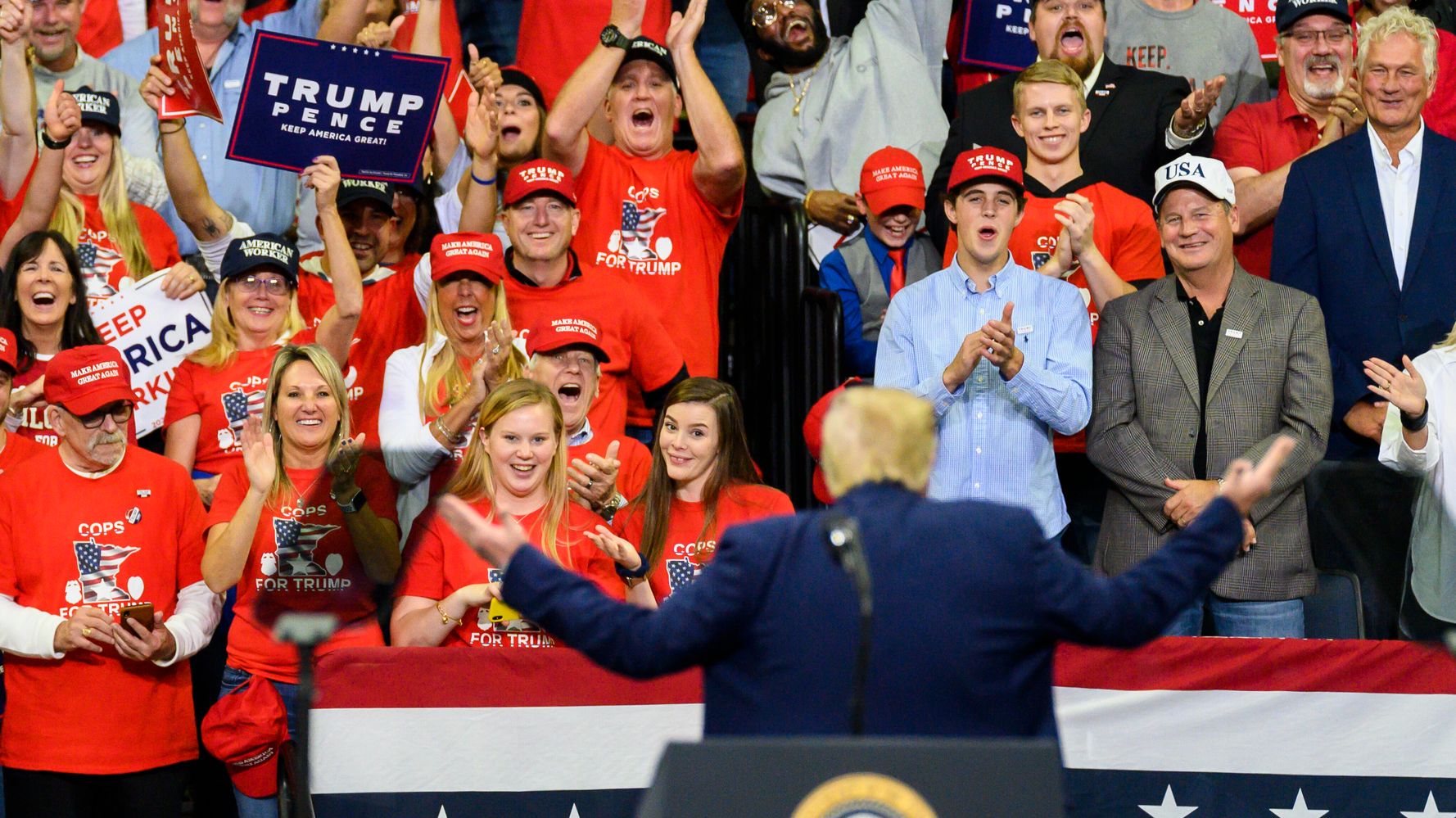 MINNEAPOLIS ― Jason Munson gets all his news either directly from the president or from the conspiracy theory website Infowars. He likens Donald Trump’s campaign rallies to religious revivals. He says Trump is the first Republican he has voted for with enthusiasm.

“All the other presidents who were Republicans? They were all a bunch of pussies,” said the 49-year-old construction worker who spent Wednesday night at the Target Center arena to be sure to be as close to Trump as possible the following night. “I get goose bumps just thinking about it.”

The good news for Trump was that the 20,000-seat arena was packed close to capacity Thursday night with Jason Munsons from all over Minnesota.

The bad news was that his cult-like followers, while a significant percentage of the Republican voting base, are likely not enough to flip the state that Trump narrowly lost in 2016 into his column next year. Even worse: Trump’s actions and words that most appeal to rally audiences actually turn off key groups whose support Trump would need to take the state’s 10 electoral votes.

“Trump’s ‘base’ represents 40% of everyone who voted for him in ’16,” said former Illinois Congressman Joe Walsh, who is challenging Trump for the 2020 Republican nomination. “That guy at the rally represents 30% of Trump’s base.”

Priorities USA, the Democratic super PAC working to defeat Trump, does not include Minnesota on its list of targeted states for next year, which includes Wisconsin, Pennsylvania, Michigan and Florida. Instead, the state is on its “watch” list of must-win states that could become competitive, sandwiched between Colorado and Virginia.

That level of relative confidence is perfectly OK with Tim Murtaugh, the Trump campaign’s communications director. He rattles off the statistics: 20 paid staff in Minnesota already, compared with just one during the 2016 campaign, with the goal of hitting 100 by next autumn. The expectation of spending “tens of millions” by Election Day. “This is a not a head fake,” he told HuffPost on Thursday.

Matt Fuehrmeyer, for one, takes the Trump camp at its word. “We have to treat Minnesota like a state that we have to fight for to beat Donald Trump,” said the onetime aide to former Democratic Sen. Al Franken of Minnesota.

He said that, although Democrats are focused on winning back the three longtime Democratic states Trump won in 2016 that gave him the presidency, they cannot afford to take Minnesota for granted, even if it hasn’t voted Republican in a presidential race since Richard Nixon’s reelection in 1972.

“Donald Trump can lose Wisconsin, Michigan and Pennsylvania but win Minnesota and get reelected,” he said.

Munson, from the town of St. Michael, about 45 minutes northwest of Minneapolis, had plenty of company Thursday evening by way of devotion to Donald Trump.

Jill Simons, a 46-year-old pediatrician, came from Edina, about 20 minutes southwest of the Target Center. She said she is not bothered by his asking Ukraine to investigate political opponent Joe Biden: “I think he has a right to.”

Dustin Kluge, a 21-year-old Air Force airman who came to the rally wearing a “Space Force” T-shirt that Trump’s campaign has been selling since last year, said Trump was justified in asking a foreign government for help since all politicians do it.

Nancy Vergin, who drove three hours from her home in Benson near the South Dakota border, called the House Democrats’ impeachment inquiry “stupid” and said she knew it would not succeed. “They can’t win at the ballot box.”

During 102 minutes of remarks, Trump hit those themes and more, and in the tone that his fans love.

On a protester in the stands: “Go home to Mommy.”

On accepting refugees in the United States: “We are keeping extremists, criminals and terrorists the hell out of our country.”

On the news media: “These are very dishonest people. You understand that.”

On his border wall: “That sucker is going up. It is the strongest. It is the finest. It’s steel. It’s hardened concrete. It’s deep. It’s high. It’s a thing of beauty. And it’s going to keep criminal aliens out of our country.”

Trump even suggested that a backlash against Omar would help him win the state next year: “She is a big reason that I am going to win, and the Republican Party is going to win Minnesota in 13 months.”

Tom Craft, a 37-year-old information technology consultant who most certainly was not attending the Trump rally, is not buying it.

“I don’t think there’s any chance he’s going to win Minnesota,” he said, adding that he understands why so many cultural conservatives support him because he grew up in the rural, central part of the state. But even Republicans he knows in the city and suburbs who gave him a shot in 2016 have had enough of all the chaos. “I think Trump’s delusional.”

As she introduced Second Lady Karen Pence at a “Women for Trump” gathering in neighboring St. Paul on Wednesday, state Republican Party chairwoman Jennifer Carnahan reminded the 250 or so who turned out that Democrats have won Minnesota in every presidential election since 1976 ― but that Trump came within 45,000 votes of winning without even trying very hard.

“We have an incredible opportunity in 2020 to turn that tide,” she said.

Doing so would be a major step toward delivering Trump a second term. Trump won 36 more electoral votes than he needed in 2016, but 46 of them came thanks to a total victory margin of 77,744 votes in Wisconsin, Pennsylvania and Michigan ― an average margin of 0.6%.

Since then, a slowing economy caused in large part by Trump’s trade war has put those states in jeopardy for him. If he loses all three, and every other state goes the same way it did in 2016, Trump would fall 10 votes short of an Electoral College victory. And while the Trump campaign is also pushing hard in other states it narrowly lost ― New Hampshire and Nevada ― neither of them by itself would be enough to put Trump over the top. Minnesota would.

Murtaugh said the Trump campaign fully intends to win Wisconsin, Pennsylvania and Michigan. Minnesota would simply remove all doubt. “If we win Minnesota, it’s lights out.”

Of course, Trump received only 2,000 more votes in Minnesota in 2016 than Mitt Romney did in 2012. The difference between former President Barack Obama’s easy victory and Hillary Clinton’s narrow win was a drop-off of nearly 200,000 Democratic votes.

What’s more, between 2016 and now, Minnesota has already had a statewide election: the midterm a year ago, when Democrats comfortably won both U.S. Senate seats and the governor’s race. They also easily unseated two Republican House members in the Twin Cities suburbs while losing two open Democratic House seats ― one by just 1,315 votes ― in rural areas.

The main factor energizing Democratic voters in the suburbs has been Trump’s erratic behavior and untempered language, characteristics that Trump appears to see as a positive feature and continues to exhibit, particularly at rallies.

Democratic pollster Peter Hart estimated that Trump’s hardcore base, those who will stick with him no matter what, probably represents no more than 9% of the total electorate. Hart said that appealing to that slice made sense in a crowded primary, such as Trump faced in 2016, but is counterproductive in a general election. “Hard to get a majority with that approach,” Hart said.

The Trump campaign tacitly acknowledges that with its “Women for Trump” series of discussions, which pushes a quieter message that essentially tells women alarmed by Trump to ignore him and instead focus on things like the unemployment rate.

“We know, it’s not so easy sometimes to be a Trump supporter,” said Lara Trump, wife of the president’s son Eric, at the Wednesday gathering.

Both she and Karen Pence told their audience in St. Paul that touting the strong economy might be the best tactic. “This is a president that cares about your pocketbook,” Pence said.