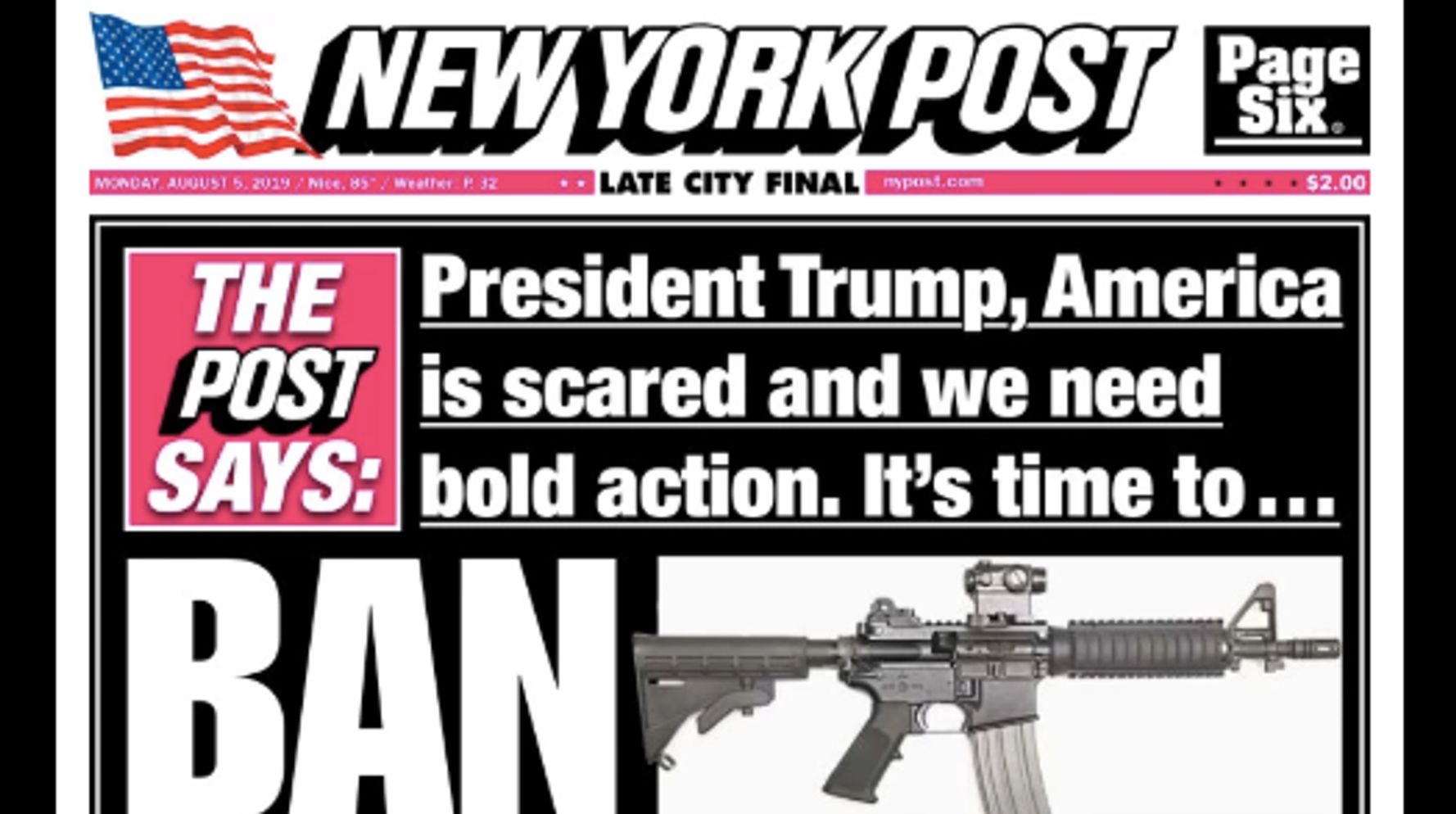 “President Trump, America is scared and we need bold action. It’s time to… BAN WEAPONS OF WAR,” the cover reads next to a picture of an assault-style rifle, a weapon that mass shooters frequently use to kill as many people as possible.

In an accompanying op-ed, the Post’s editorial board called on Trump to stand up to the National Rifle Association and appeal to Americans, including gun owners, who are “appalled by the endless string of mass shootings.”

“People all across the nation are scared; many feel like the country is spinning out of control,” the board wrote. “They’re looking to their leaders for more than prayers. America is terrified.”

The editorial continued: “President Trump, you are positioned to assuage that fear. On gun control, you are a pragmatic centrist, someone who knows there is a vast majority of Americans who are not to the extreme left or right on this issue. They just want the killings to stop. … Come up with answers. Now. Beginning with the return of an assault-weapons ban.”

Dozens of people have died in mass shootings nationwide over the last week or so. A shooter opened fire at the Gilroy Garlic Festival in Gilroy, California, on July 28, killing 3 people and injuring more than a dozen others.

On Saturday, a gunman stormed a Walmart in El Paso and fatally shot 20 people. More than 25 others were injured. The next day, another gunman opened fire in a popular nightlife district in Dayton, Ohio, killing nine people and injuring at least 27 other people.

All three shooters used assault-style rifles in the massacres, according to officials.

Several countries have banned assault weapons and semi-automatic rifles in the wake of mass shootings on their soil. Weeks after a gunman opened fire at two mosques in Christchurch, New Zealand, killing dozens of people, the country’s Parliament voted to ban most semi-automatic and military-style weapons.

The U.S. has experienced dozens of mass shootings in recent years, yet Congress has passed little meaningful gun control legislation.

″‘Guns don’t kill people, people do,’ says the cliché. But the twisted and the evil can kill a lot more people when handed a murder machine,” the Post’s editorial board wrote. “Mr. President, do something — help America live without fear.”

Head over to The New York Post to read the full op-ed.