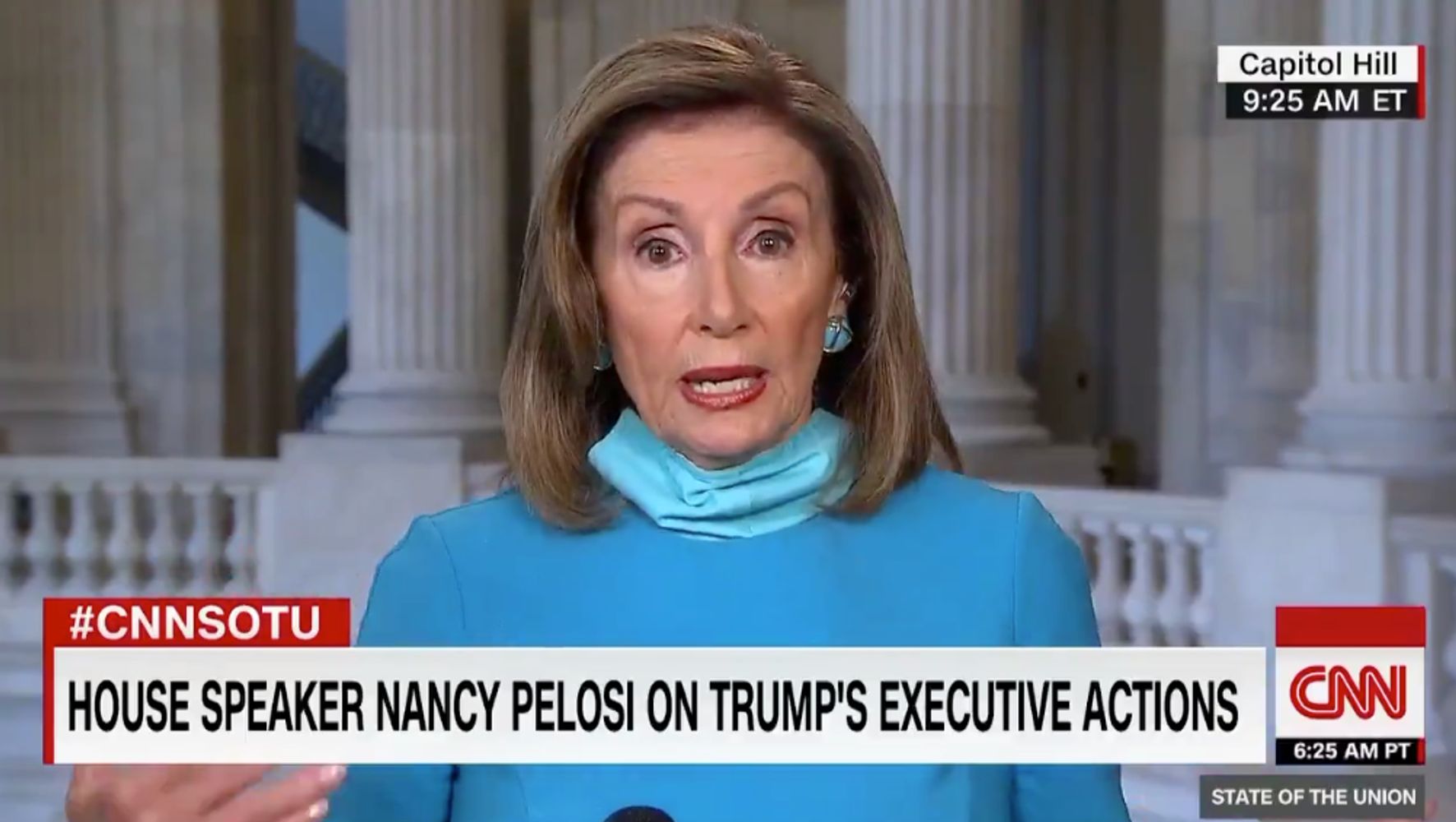 But she stopped short of saying whether Democrats would mount legal challenges to the measures ― one executive order and three memorandums ― signed by Trump on Saturday.

“Well, the fact is, is that whether they’re legal or not takes time to figure out,” Pelosi told CNN’s “State of the Union” when asked if she would sue to stop the executive actions.

She added: “Right now we want to address the needs of the American people. As my constitutional advisers tell me, they’re absurdly unconstitutional.”

Pelosi said she hopes stimulus talks will resume in Congress.

“I’ll leave that up to the attorneys,” Schumer told ABC News’ “This Week.”

House Speaker Nancy Pelosi on Trump’s executive actions: “Something’s wrong. Either the President doesn’t know what he’s talking about. … Or something’s very wrong here about meeting the needs of the American people at this time” #CNNSOTU pic.twitter.com/Id401eeMdc

Trump announced the executive actions Saturday as negotiations stalled between congressional Republicans and Democrats on the latest coronavirus stimulus package. The president’s measures focused on extending moratoriums on student loan payments and evictions, suspending the collection of payroll taxes and rolling out additional unemployment aid.

But Democratic leadership criticized the measures as “weak” and “unworkable,” noting that the actions didn’t actually extend the federal eviction moratorium passed in the CARES Act in March.

Trump said that his administration would provide $400 weekly in enhanced unemployment benefits, but with a catch: People must first qualify for $100 in jobless aid from their states before the $300 in federal aid kicks in. What’s more, the $400 payment would be $200 less than what unemployed workers received under the CARES Act.

Trump’s top economic adviser, Larry Kudlow, told CNN Sunday that he wasn’t sure which states would contribute to Trump’s unemployment plan or how long it would take for those payments to be disbursed.

Pelosi told CNN that states don’t have the money to cover the costs outlined in Trump’s unemployment insurance plan.

“What the president’s advisers said … really shows the weakness and the meagerness of what the president proposed,” Pelosi told CNN. “First of all, he’s saying states have the money. No, they don’t. They have expenses from the coronavirus. They have lost revenue. Because of that, they are firing health care workers, first responders, teachers and the rest.”

“While it has the illusions of saying we’re going to have a moratorium on evictions, it says I’m going to ask the folks in charge to study if that’s feasible,” Pelosi said. “While he says he’s going to do a payroll tax, what he’s doing is undermining Social Security and Medicare.”

In response to Sasse’s criticism, Kudlow said Sunday that it’s possible the White House will be “going to court” over the executive actions.

″We’re going to go ahead with our actions anyways,” Kudlow told ABC News.

“I appreciate those things. Maybe we’re going to go to court on them. We’re going to go ahead with our actions anyways,” Kudlow tells @GStephanopoulos when pressed on criticism by GOP Sen. Sasse that Trump’s payroll tax deferral is “unconstitutional slop.” https://t.co/UsD0N9aYk0 pic.twitter.com/7PV2NVw2xy