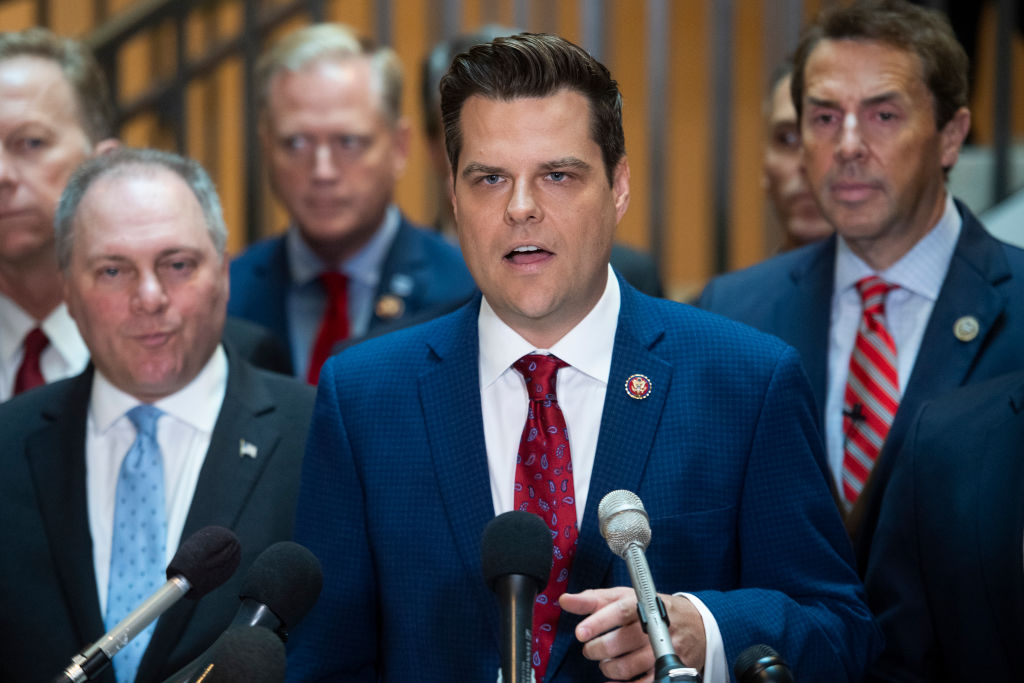 Several weeks into the Democrat-led impeachment inquiry into President Donald Trump, some Republican lawmakers are indicating that they will no longer tolerate the process shrouded in secrecy.

On the same day that more than three dozen lawmakers walked into a closed-door impeachment hearing in the basement of the U.S. Capitol on Oct. 23, a spokesperson for Sen. Lindsey Graham (R-S.C.) confirmed that the chairman of the Senate Judiciary Committee would “soon” introduce a resolution calling on the Senate to dismiss the House impeachment, unless proper procedures are followed.

They are the most significant steps that Republicans have taken to pressure the Democrats to adjust the process of the inquiry since House Speaker Nancy Pelosi (D-Calif.) formally launched the proceedings on Sept. 24. Before entering the hearing in the House Intelligence Committee room, several Republicans criticized Rep. Adam Schiff (D-Calif.)’s approach to the inquiry and demanded that President Donald Trump be granted due process.

“The president is not above justice, but as you know, neither is he below it,” said Rep. Mark Walker (R-N.C.). “Facing your accusers, the ability to call rebuttal witnesses, cross-examination, the right to object to evidence and ability to attend hearings, depositions and interviews—these are basic standards that every American should expect, including the president of the United States who is currently being the target of an angry mob, a willing media machine, and a twisted version of an impeachment process that didn’t begin two months ago, that began day one of this administration. It is a sham and it’s time for it to end.”

Some of the Republicans remained in the House Intelligence Committee room for four hours, determined to remain until reaching a resolution with the Democrats.

“I am currently in the SCIF with my colleagues, w/out our phones. We plan on staying here until we negotiate a resolution,” Rep. Louie Gohmert told his staff via a secure line, according to his Twitter account.

“Schiff and the witness are still sequestered away/not in the SCIF, so it is sort of a standoff right now.”

Rep. Matt Gaetz (R-Fla.) carried out a similar maneuver less than two weeks ago, when he entered the House Intelligence Committee room during an impeachment hearing and demanded to hear the testimony. Gaetz was asked to leave and complied, but the move drew media attention to the proceedings and underscored the limited access to lawmakers outside the three committees conducting the inquiry.

The impeachment inquiry is centered on a request Trump made to Ukrainian President Volodymyr Zelensky during a July 25 phone call. Trump asked Zelensky to find out more about a server tied to CrowdStrike, the cybersecurity firm that examined the Democratic National Committee server that was allegedly breached by Russian government hackers. Trump also asked Zelensky to look into the Ukrainian business dealings of Hunter Biden, the son of former Vice President Joe Biden.

The inquiry developed from a complaint by an anonymous whistleblower who relayed mostly second-hand allegations about the July 25 call and related events. The central allegation by the Democrats is that Trump’s request to Zelensky amounted to election interference, because Biden is the leading candidate for the 2020 Democratic presidential nomination. The Democrats further allege that Trump withheld aid from Ukraine as part of a quid pro quo to pressure Zelensky to investigate Biden and his son.

Publicly available testimony from the witnesses who have appeared before lawmakers so far doesn’t support the allegation of a quid pro quo. William Taylor, the charge d’affairs at the U.S. Embassy in Ukraine, told lawmakers on Oct. 22 that Ukrainian officials, including Zelensky, weren’t aware until more than one month after the July 25 call that military aid to Ukraine was on hold, according to Taylor’s opening statement (pdf).

“Amazingly, news of the hold did not leak out until August 29,” Taylor said, apparently referring to an Aug. 28 article by Politico.

The allegation tying the quid pro quo to an investigation into the Bidens appears to so far be substantiated only by third-hand hearsay from Taylor. He told lawmakers that he heard about a phone call between U.S. Ambassador to the European Union Gordon Sondland and Trump, in which Trump spoke about his conversation with Zelensky. Rep. Lee Zeldin (R-N.Y.), who has sat through all the impeachment testimonies so far, ridiculed the distant hearsay on Oct. 23.

Republicans in the Senate are also taking steps to pressure the Democrats into following precedent. Graham is planning to introduce a resolution that would call on the Senate to dismiss the House impeachment unless Democrats follow the precedent established in the impeachment proceedings against presidents Bill Clinton and Richard Nixon. In both cases, the full House voted to authorize the impeachment inquiry.

“We cannot allow future presidents and this president to be impeached based on an inquiry in the House that’s never been voted upon, that does not allow the president to confront the witnesses against him, to call witnesses on his behalf, and cross-examine people who are accusing him of misdeeds,” Graham told Fox News.

“All I’m asking is give Donald Trump the same rights Richard Nixon and Bill Clinton had when it comes to impeachment. And I’m insisting that Donald Trump be given the same rights that any American has when you’re giving a parking ticket, to confront the witnesses against you, can’t be based on hearsay,” he added. “Any impeachment vote based on this process, to me, is illegitimate, is unconstitutional, and should be dismissed in the Senate without a trial.”

Graham’s spokesperson told The Epoch Times that the senator plans to introduce the resolution “soon,” but didn’t provide a date.

The House Democrats need a simple majority to impeach Trump. Under the Constitution, impeachment by the House is submitted to the Senate, which then holds a trial, with the chief justice of the Supreme Court as the presiding judge. A two-thirds majority in the Senate is needed to secure a conviction.

In his request to Zelensky, Trump referenced the firing of a Ukrainian prosecutor. That prosecutor, Viktor Shokin, has issued a sworn statement claiming that he was fired due to pressure from Joe Biden, because Shokin refused to drop an investigation into Burisma, a Ukrainian gas giant.

Early last year, Biden, while speaking on a Council of Foreign Affairs panel, bragged about forcing the firing of Ukraine’s top prosecutor by withholding $1 billion in U.S. loan guarantees, while he was the vice president. At the same time, his son, Hunter Biden, was on the board of directors of Burisma.

Hunter Biden’s lawyer confirmed that the Burisma board position was paid. It remains unclear what Biden’s total compensation was, but bank records (pdf) for a company controlled by Biden’s friend and business associate, Devon Archer, show funds arriving from Burisma at a rate in excess of $166,000 per month. The bank records for the firm, Rosemont Seneca Bohai, became public as part of an unrelated trial. The funds started arriving in the bank account in April 2014, which is the time when Hunter Biden joined the board, according to a statement from his lawyer.