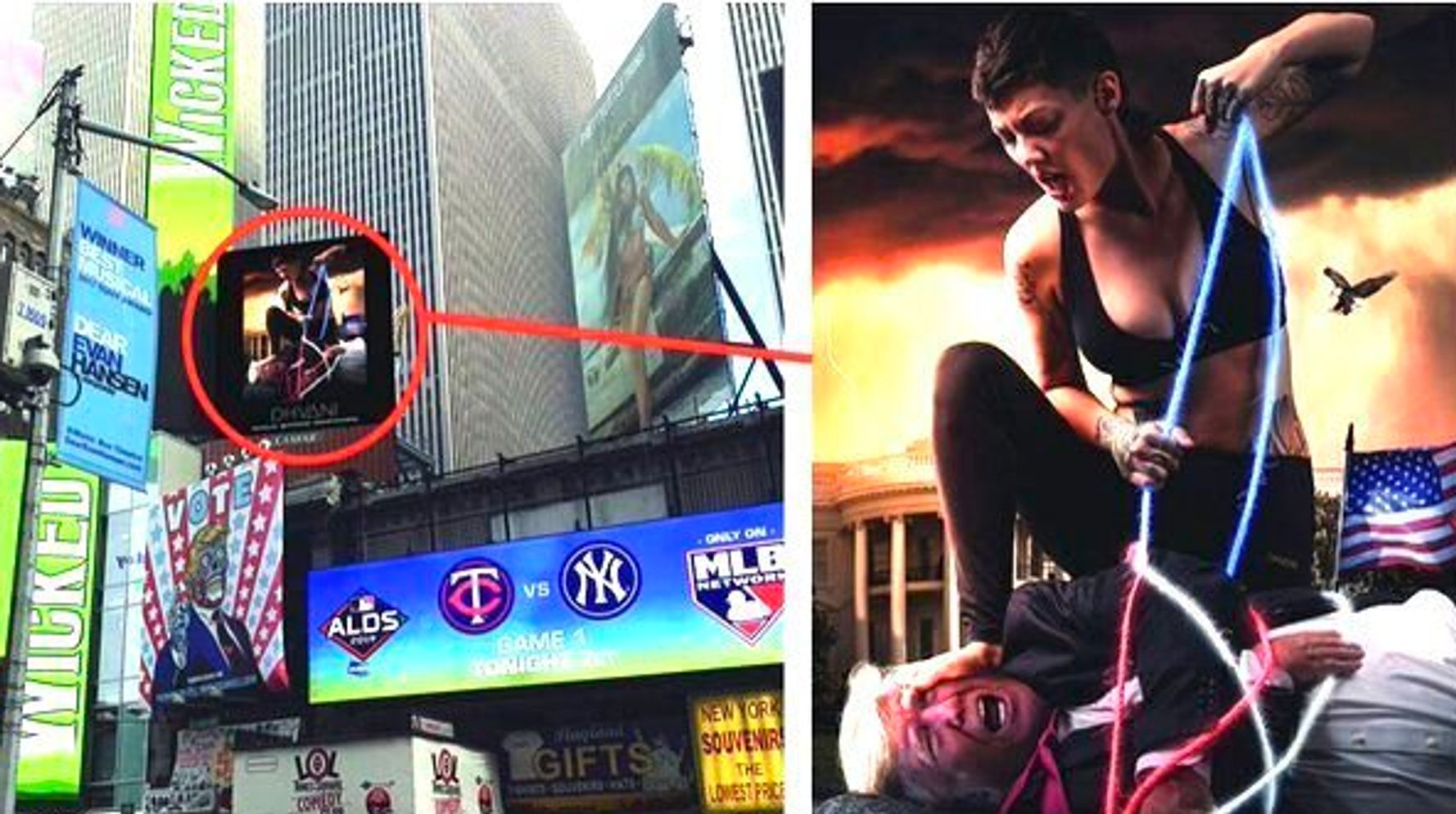 A riveting clothing advertisement on a Times Square billboard depicts a female Marine veteran in athletic wear hogtying a man who appears to be President Donald Trump in front of the White House.

The ad has already been slammed in a tweet by Donald Trump Jr., who called reporters “hypocrites” on Thursday for failing to criticize it.

The 30-foot-high ad features a Trump look-alike being trussed up with red, white and blue rope as the vet steps on his face. The ad was unveiled in Manhattan last week by Oregon-based athletic clothing company Dhvani.

We have some big news to share with you. pic.twitter.com/VTcm8AoW5I

Dhvani called the ad “metaphorical,” adding on Twitter that it “does NOT and will NEVER condone violence of ANY KIND.” It’s intended to “artistically express the frustrations we believe many women share,” the statement added.

“We are on the right side of history,” Brown declared. “The billboard is an expression of our First Amendment right. Its art is a symbol … This is about taking our country back.”

“He unilaterally has created a gag rule that you cannot refer patients with reproductive information about abortion, sex ed, and contraception,” Brown told AP. “He’s gagging doctors and nurses, and telling them what they can and cannot tell patients.”

“This is about giving a voice to women,” Brown told The Washington Post. “Our intent is for our brand to stand for progressive change in the face of what we perceive to be steps backwards in the evolution of our country.”

The model in the Times Square ad is Michal Mesa, a Marine Corps vet and middle school teacher, according to Brown.

The campaign has elicited widespread support — and fury — on social media.

One of the most beautiful things about America is that we are all free to make our own choices. If you disagree with our stance, vote with your dollars by shopping elsewhere. If you are with us, please join us as at https://t.co/JBBsTlrmXU as we #StandForSomething together.

Donald Trump Jr. called on the media to express outrage over the billboard.

Hey @NYTimes and MSM. Since you had time to thoroughly cover a stupid and tasteless meme seen by 8 people with incredible outrage, I figured you should dedicate the same time and outrage to THIS BILLBOARD IN TIMES SQUARE you hypocrites!
Unless of course you’re just full of shit. pic.twitter.com/fsEF6ClRuv

He was referring in his tweet to previous coverage of a graphic video, played recently during a conference at Trump’s Miami golf resort, depicting a fake Trump stabbing and shooting members of the media and political opponents.