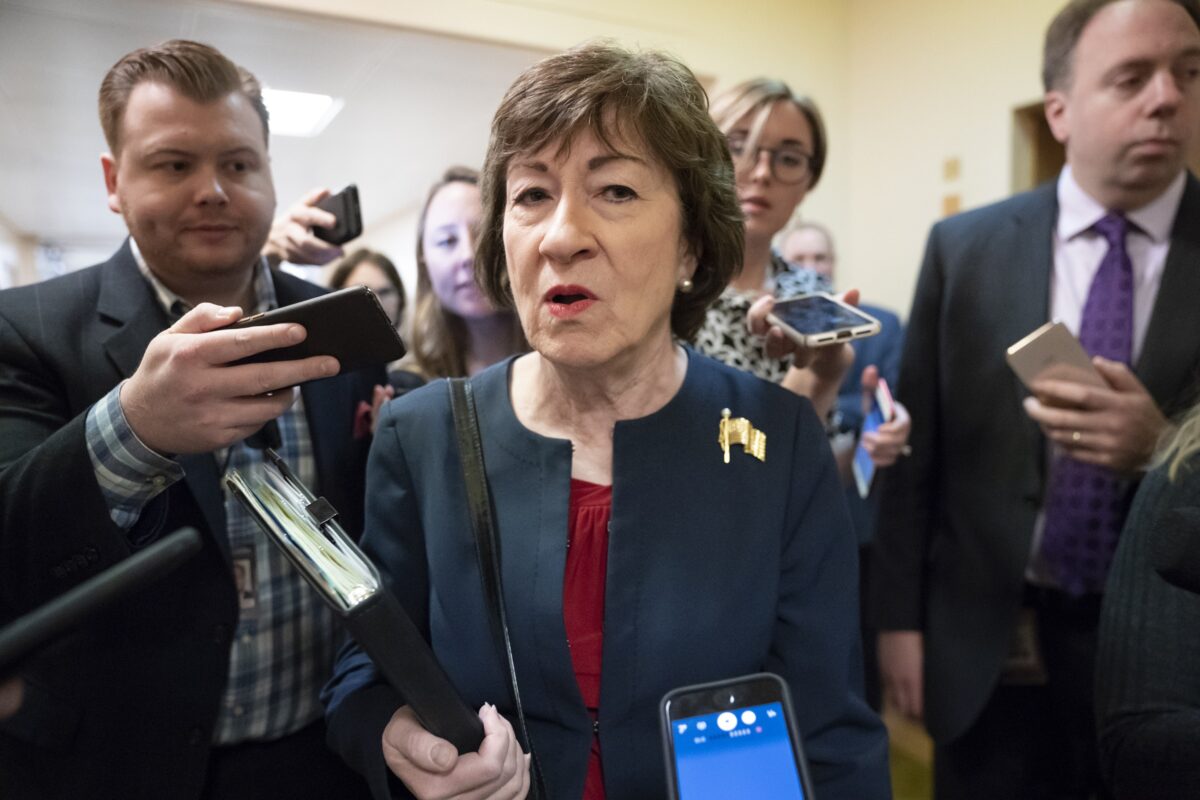 Sen. Susan Collins (R-Maine) said Saturday that the Senate should not vote on a nominee to replace late Justice Ruth Bader Ginsburg before the November election.

She also said Trump can nominate a replacement with his constitutional authority and has no objection to the Senate Judiciary Committee starting the reviewing process.

However, the vote should be scheduled after the election to be fair, consistent, and to ensure Americans’ faith in elected officials.

“Given the proximity of the presidential election, however, I do not believe that the Senate should vote on the nominee prior to the election,” she said in a statement. “The decision on a lifetime appointment to the Supreme Court should be made by the President who is elected on November 3rd.”

Collins is the first Republican Senator to publicly object to voting on U.S. Supreme Court nominee to fill Ginsburg’s vacancy before the election. Her stance on the issue is mostly in alignment with the Democrats.

Republicans and Democrats fell into a fierce battle over Ginsburg’s vacancy following her death.

Meanwhile, Democrats, including presidential candidate Joe Biden and Senate Minority Leader Chuck Schumer (D-N.Y.), insisted the process should be postponed to some time after the November election and the nomination should be left to the one who wins the presidency.

Democrats tried to convince Republicans to follow the principle set during the nomination of Merrick Garland in 2016.

Garland was nominated by former President Barack Obama to replace Justice Antonin Scalia after he died. The nomination was blocked by McConnell, who said that the Republicans wouldn’t consider Obama’s nominee because they felt the vacancy should be filled by whoever won the 2016 election.

However, McConnell said Friday the situation was different then because the Senate and the presidency were held by different parties. Republicans currently control both.

“In the last midterm election before Justice Scalia’s death in 2016, Americans elected a Republican Senate majority because we pledged to check and balance the last days of a lame-duck president’s second term. We kept our promise. Since the 1880s, no Senate has confirmed an opposite-party president’s Supreme Court nominee in a presidential election year,” he wrote in a statement right after Ginsburg’s death.

“President [Donald] Trump’s nominee will receive a vote on the floor of the United States Senate,” he said.

Some Republicans publicly rallied behind McConnell’s push to fill the Supreme Court vacancy before Election Day.

“This U.S. Senate should vote on President Trump’s next nominee for the U.S. Supreme Court,” Sen. Martha McSally (R-Ariz.) wrote in a statement.

Sen. Ted Cruz (R-Texas) warned that there will be a constitutional crisis if Republicans fail to do this.

“We cannot have Election Day come and go with a four-four court,” Cruz said during an interview with Fox News’s Sean Hannity. “A four-four court that is equally divided cannot decide anything. And I think we risk a constitutional crisis if we do not have a nine-justice Supreme Court, particularly when there is such a risk of a contested election.”

The Republicans currently hold a 53-47 majority in the Senate.

The views of some other key Republican players in this battle are still unclear.

Several top Republicans and some other potential swing votes in the Senate, including Sens. Chuck Grassley (R-Iowa), Mitt Romney (R-Utah), and Lisa Murkowski (R-Alaska), haven’t yet said whether they support replacing Ginsburg before the election.