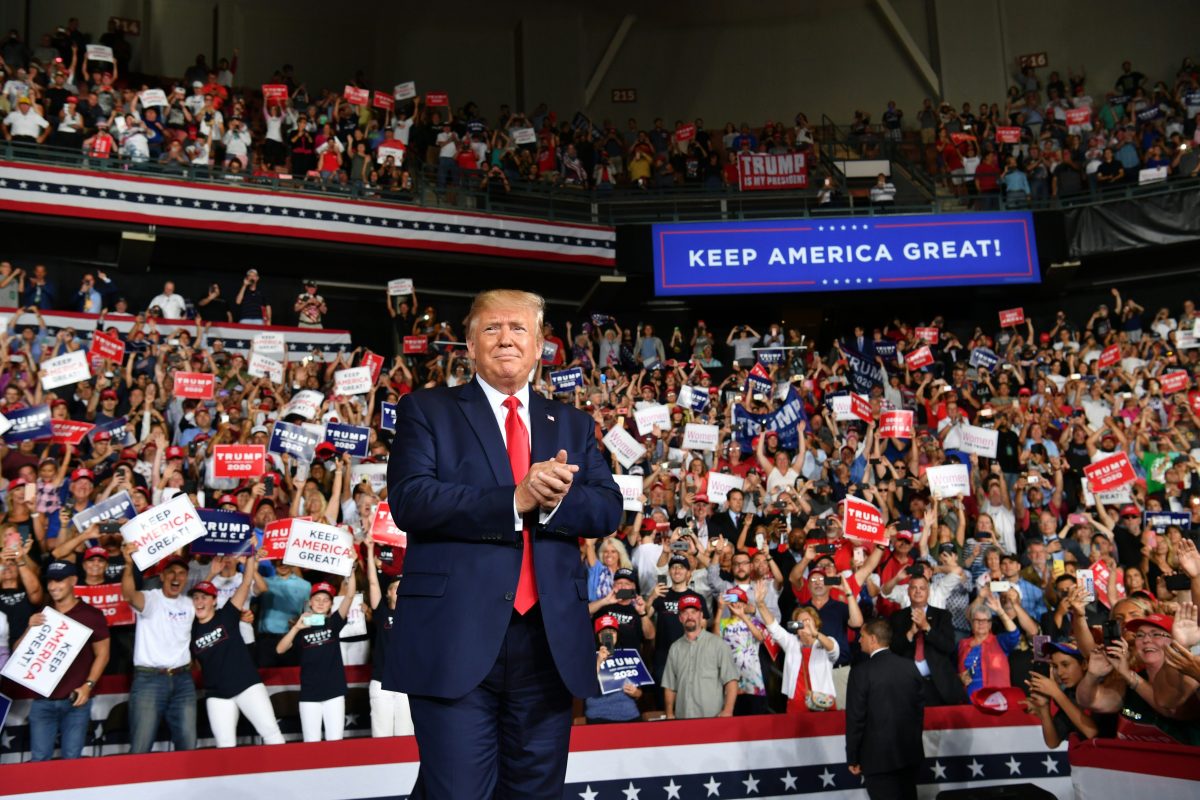 President Donald Trump addressed the field of 2020 Democrat contenders at a re-election rally in Manchester, New Hampshire, on Aug. 15. In some instances, he pointed out holes in their proposals such as their government healthcare takeover and in other moments, he condemned their increasingly radical views.

In his hourlong remarks, Trump mainly talked about his “America First” agenda and his record of economic wins, including the creation of 6 million new jobs since his election.

The audience at the Southern New Hampshire University Arena was plastered with signs including “Women for Trump,” “Keep America Great,” and “Trump 2020.”

As Trump first entered the arena—which his 2020 campaign manager said contained roughly 12,000 people—AC/DC’s Thunderstruck started playing, and the lights dimmed and then flickered to the catch word, “Thunder.”

“Now we have a bunch of socialists or communists to beat,” Trump told the crowd on Aug. 15. “They’re not far away. Does anybody want to pay a 95-percent tax?”

In the 2016 presidential elections, Trump narrowly lost the state of New Hampshire by less than 3,000 votes to then-candidate Hillary Clinton. Trump said the rally was an official launch of his campaign to win New Hampshire in 2020.

Trump talked about some of the 2020 Democrats running and said he hoped to face former Vice president Joe Biden in 2020, noting the spout of gaffes Biden recently made along the campaign trail.

“I think sleepy Joe maybe able to limp across the finish line,” Trump said. “Today, they announced they are going to cut way back on his appearances because he is such a disaster … Can you believe it?

“You’ve got Pocahontas who’s rising. You’ve got Kamala [Harris], Kamala is falling. You’ve got Beto [O’Rourke], Beto is like done,” Trump said, referring to a few of the contenders. “But we’ll see what happens.”

Trump commented on the fact that every Democratic candidate supports a government healthcare plan that would cover illegal aliens.

“Every major democrat running for president supports a massive government takeover of healthcare that would raid medicare and destroy the private health insurance plans of millions of American families, that they love,” Trump said.

“My administration is defending your right to choose the plan and doctor that is best for you,” he said.

The Green New Deal promoted by the Democrats would actually help his re-election chances, Trump said. By one estimate, the Green New Deal would cost U.S. taxpayers up to $93 trillion over the course of its mobilization. In comparison, the total projected government spending for the next 10 years is $66 trillion.

“The Green New Deal is a beautiful thing. We want it to continue onward until about a month before the election—I will let them have it like you’ve never heard it before,” he said.

Trump accused what he called radical democrats for “trying to tear America apart” and said that their views are outside the mainstream.

“They vilify anyone who doesn’t share their extreme views,” Trump said. “They view everybody as fascists and Nazis. This was a term … you couldn’t even use it. Now, they use it on a regular basis,” he continued. “They accuse our heroic border agents of running ‘concentration camps.’”

Trump was likely referring to Rep. Alexandria Ocasio-Cortez (D-N.Y.), who had accused the United States of running concentration camps on the southern border. The freshmen lawmaker faced criticisms for her remarks.

Pointing to low unemployment records and rising wages for Americans, Trump questioned why anyone would vote for the Democrats amid some of the “best numbers we’ve ever had.” Unemployment rates for African Americans, Hispanic Americans, and Asian Americans have all reached the lowest ever recorded in the history of the country, Trump said.

Labor productivity in the nonfarm sector also rose by 2.3 percent in the second quarter of 2019 from the same quarter a year ago, based on data released by the Bureau of Labor Statistics on Aug. 15.

Trump also mentioned his administration’s efforts to combat the opioid epidemic, noting that they “have reduced the total amount of opioids prescribed by 34 percent.”