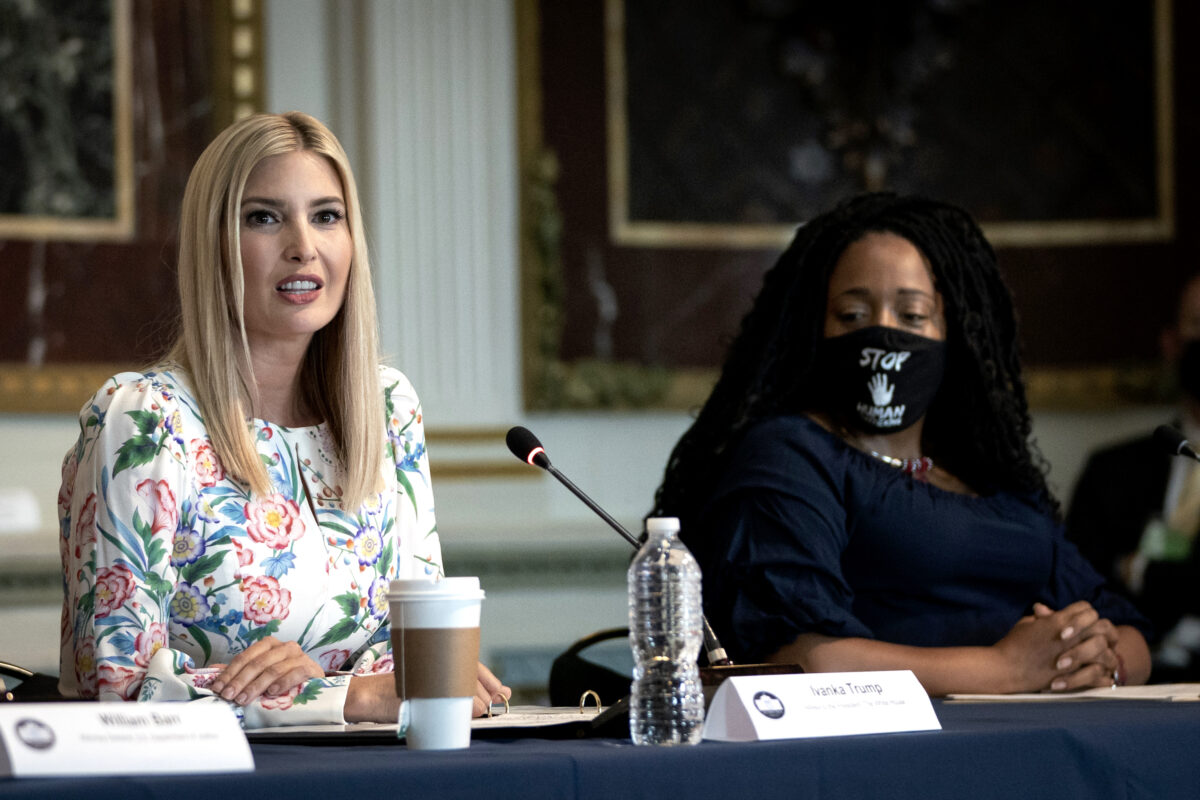 The Trump administration announced on Aug. 4 that it will award more than $35 million in grants to provide safe and stable housing to human trafficking survivors.

Presidential adviser Ivanka Trump and Attorney General William Barr said the grants will be shared by 73 nonprofit organizations in 34 states that provide housing and services to victims of human trafficking. The funding is expected to provide 6 to 24 months of transitional or short-term housing assistance to survivors, including to pay rent, utilities, or related expenses, such as a security deposit.

These grants are also expected to assist grantees in locating permanent housing, finding a job, and receiving occupational training and counseling, the administration stated.

Ivanka Trump and Barr made the announcement during a roundtable event at the White House where they were joined by other administration officials, leaders of nonprofit organizations providing support to victims, and survivors of human trafficking. The funding is being provided by the Office for Victims of Crime within the Justice Department’s Office of Justice Programs.

About 24.9 million people around the world and in the United States, both adults and children, are trapped in some form of human trafficking, according to the White House. About 1 in 800 people in the United States are living in “modern slavery,” according to 2018 data by the Walk Free Foundation. The phrase is a broad term used to describe victims of forced labor, sexual exploitation or servitude, and forced marriages, among numerous other abuses.

“DOJ housing assistance grants are absolutely critical,” Ivanka Trump said during the event. “The Human Trafficking hotline had articulated the fact that housing assistance is the number one need, the number one service requested in all of these human trafficking-related crisis cases. So this is targeting a specific need that has been highlighted for the Department of Justice.”

She added that the pandemic made the need for housing assistance more urgent, saying that many of the victims found themselves sheltering in place with their traffickers as they are left without options.

Barr said the program is the “largest federal investment of its kind.” He noted that eliminating the horrific crime and helping its victims is a top priority for the president and the DOJ.

“When survivors are liberated from the nightmare of trafficking, they often face a new challenge—they have nowhere to live. Tragically, the trauma of trafficking can give a way to new dangers caused by homelessness, and can even result in revictimization by predators,” Barr said. “None should have to endure that heartbreak.”

“These new resources, announced today, expand on our efforts to offer those who have suffered the shelter and support they need to begin a new and better life,” the attorney general said in a separate statement.

Some of the organizations sharing the grants include Camillus House Inc. in Florida, Alternatives for Girls in Michigan, and The Salvation Army in New York (pdf).

Ivanka Trump has embraced combating human trafficking as one of her focus areas. Her father, President Donald Trump, previously said the issue “has been so important to her.” The first daughter has previously held multiple meetings on human trafficking, has advocated for anti-trafficking legislation, and hosted a White House trafficking summit in January. She also visited nonprofit groups that help victims during a trip to Atlanta earlier this year.

Similarly, the president has often spoken publicly about the administration’s response to the issue and has taken a number of actions since taking office, including signing an executive order on combating human trafficking and online child exploitation. The executive order created a new position dedicated to fighting the issue, as well as expanded prevention education programs, promoting housing opportunities for survivors, and prioritizing the removal of child sexual abuse material from the internet.

In June, the State Department released the 2020 Trafficking in Persons Report, which is described as a tool “for diplomatic engagement with governments around the world on human trafficking.” This year’s report called out China and Cuba for their pattern of forced labor and their inaction on the issue.

“The Chinese Communist Party and its state-owned enterprises often force citizens to work in horrendous conditions on Belt and Road projects,” State Secretary Mike Pompeo said during the launch of the report. “Then there’s Cuba. Up to 50,000 Cuban doctors have been forced by the Castro regime into human trafficking situations in more than 60 countries around the globe. They are the regime’s number one source of income.”

In the United States, the National Human Trafficking Hotline stated it had received 11,500 human trafficking reports in 2019, with sex trafficking being the most commonly reported type of trafficking.

Forced labor and human trafficking is estimated to be a $150 billion industry worldwide, according to the International Labor Organization.

Bowen Xiao contributed to this report.