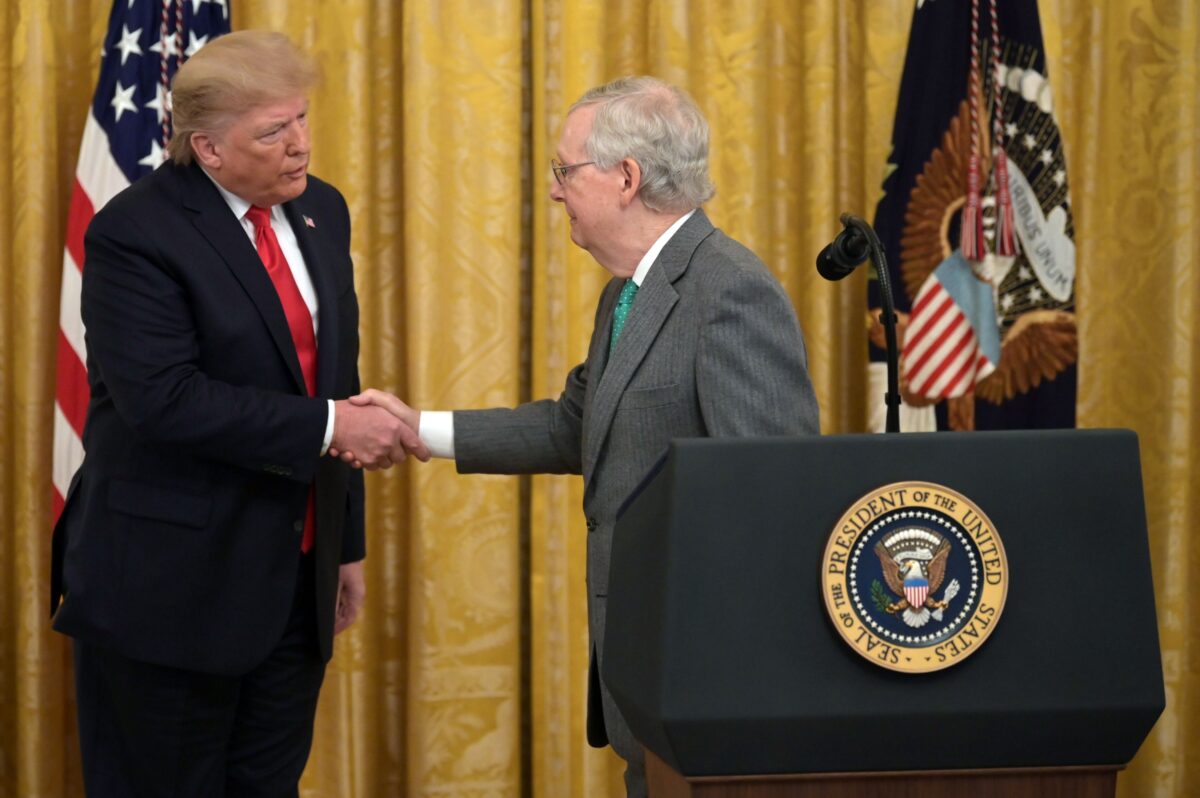 President Donald Trump touted the milestones reached in federal judge appointments in a Nov. 6 speech, saying that his administration was on track to reach over 180 nominations by early next year.

Since his inauguration, Trump said he has successfully gotten 158 judges confirmed, including 112 District Court judges, 44 Court of Appeal judges, and two Supreme Court judges. Currently, dozens of judges are awaiting confirmation hearings and votes for district and court of appeal vacancies.

During the event, Trump said they were on track to having more judges confirmed this year, expressing appreciation to Senate Republicans Mitch McConnell, Lindsey Graham, and other senators for the speed of the confirmation process.

“We are going to be I think just about number one by the time we finish, number one of any president any administration,” Trump said.

He reiterated that his nominees that are being appointed will “uphold the U.S. Constitution,” one of his campaign promises to reshape the federal judiciary.

“From the beginning of my campaign, I promise[d] to appoint judges who will adhere to the true and original meaning of our Constitution. This afternoon that promise was made and that promise was kept,” he said.

He also vowed to put an end to judicial activism, saying that rulings made by judges who act on political ideology instead of within the confines of the law are impacting the country’s security, society, and economy.

“When judges write policy instead of applying the law, they impose sweeping changes on millions of Americans without the benefit of legislative debate, public rulemaking or the consent of the governed,” Trump said. “As a result, these highly political rulings inflict painful damage on our security, society, and economy, imposed on workable businesses, workers, families, and law enforcement.”

“I will do everything in my power to halt judicial activism and to ensure the law is upheld equally, fairly, and without political prejudice for all of our citizens,” he said.

The White House and his administration have accused unelected federal judges of issuing nationwide injunctions that block crucial executive actions in dispute, preventing application across the nation while the cases proceed through the court. This has allowed judges to indirectly function as lawmakers.

Former Attorney General Jeff Session vowed to fight back against the encroachment of the judicial branch, commenting last year that “too many judges believe it is their right, their duty, to act upon their sympathies and policy preferences.”

“In effect, activist advocates want judges who will do for them what they have been unable to achieve at the ballot box,” he said. “It is fundamentally undemocratic.”

Several of these injunctions have had a detrimental to Trump’s immigration agenda, which has seen some crucial immigration policies be put on hold.

“On perhaps no issue has these district court injunction has been more brazen and damaging than in the area of immigration,” Trump said. “In case after case, judges are prohibiting us from enforcing the plain letter of the law.”

The president is also nearing another critical milestone, reaching a quarter of the federal appellate court judge appointments, pending Senate confirmation of another batch of his nominees.

Out of the nation’s 179 appeals court judges, 44 are appointed by Trump, while several more are awaiting confirmation on Thursday.

Some of Trump’s nominees have faced delays in having their confirmations go through after Democrats fiercely opposed their nominations, including Lawrence VanDyke, who is nominated for the ninth circuit court. He was brought to tears during a Senate hearing last Wednesday while defending accusations made by the American Bar Association (ABA).

The ABA, who makes evaluations on nominated federal court judges, had given him a “not qualified” rating in a letter to the Senate Judiciary Committee (pdf), accusing him of not being fair to members of the LGBTQ community.

“Mr. VanDyke’s accomplishments are offset by the assessments of interviewees that Mr. VanDyke is arrogant, lazy, an ideologue, and lacking in knowledge of the day-to-day practice including procedural rules,” the letter said.

During the hearing, he disputed the ABA’s account, saying that “it is a fundamental belief of mine that all people are created in the image of God. They should all be treated with dignity and respect, senator.”

The evaluation was conducted by Marcia Davenport, a trial attorney in Montana, who had historically opposed VanDyke politically and contributed to one of VanDyke’s opponents when he ran for a seat on the Montana Supreme Court, according to Judicial Crisis Network policy director Carrie Severino.

Severino also criticized the ABA for a history of bias against conservative nominees to the judiciary, according to a statement.

Meanwhile, former Nevada State Bar President Alan Lefebvre said he has quit the ABA over their letter about VanDyke.

“It would be impossible for a reviewer to challenge such a qualified nominee’s abilities unless he was yoked with an ideologue’s agenda,” he said in a statement.

Trump also addressed some personal assaults experienced by some nominees from members of the left, adding that he and Republicans will never give up in “defending our freedom.”

“Well, I’m your President, we will continue to nominate highly qualified judges who truly love our Constitution,” he said.