Trump Claims He Halted Aid To Ukraine To Fight ‘Corruption’ 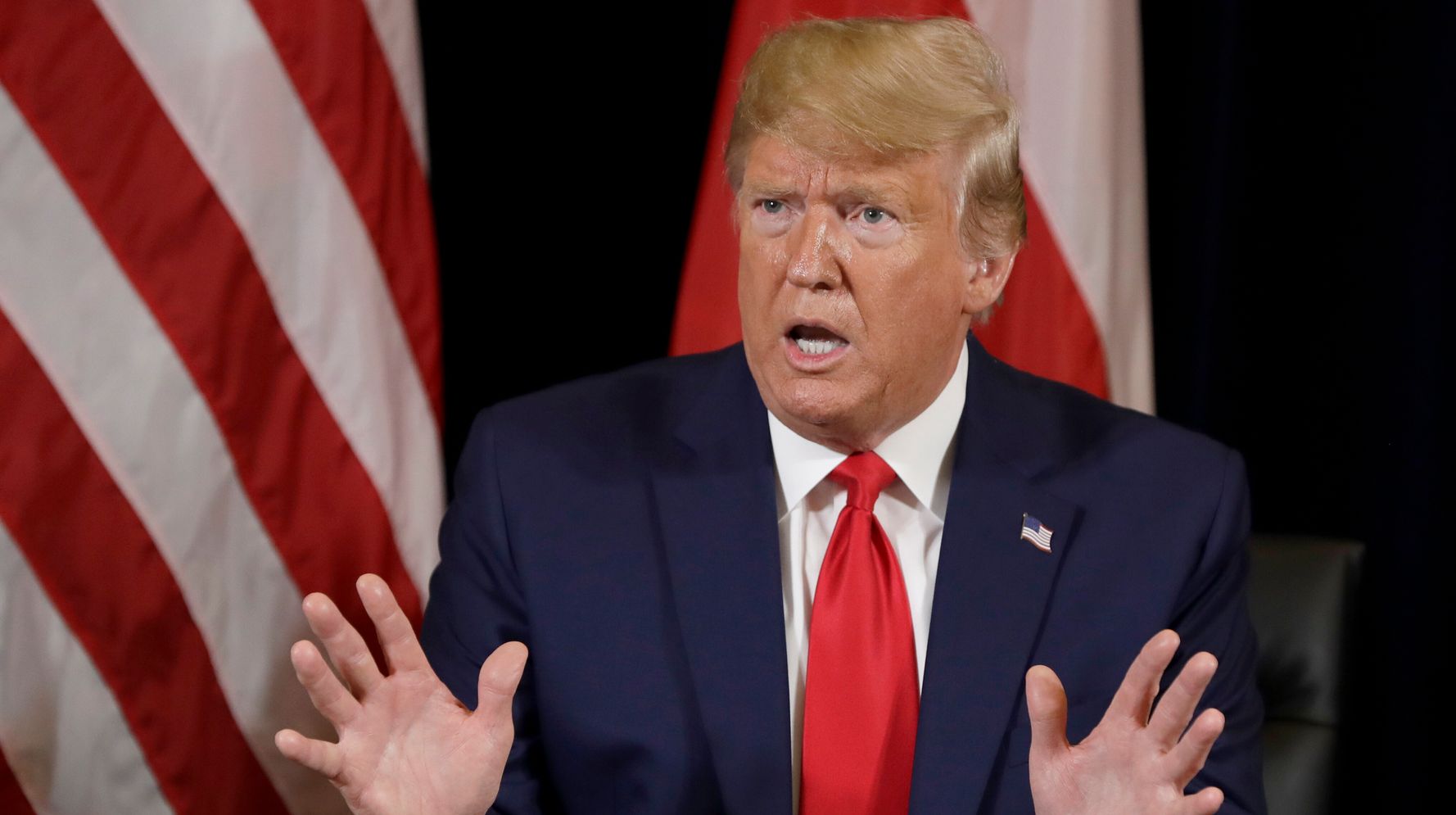 WASHINGTON (AP) — President Donald Trump ordered his staff to freeze nearly $400 million in aid to Ukraine a few days before a phone call in which he pressured the Eastern European nation’s leader to investigate the family of political rival Joe Biden, a revelation that comes as more Democrats move toward impeachment proceedings.

Trump, in remarks to reporters at the United Nations on Tuesday, confirmed that he held up the aid but said he did so to fight corruption and urge European nations to share in helping out Ukraine.

“As far as withholding funds, those funds were paid,” Trump said. “They were fully paid. But my complaint has always been, and I’d withhold again and I’ll continue to withhold until such time as Europe and other nations contribute to Ukraine.” He named Germany and France as among the countries that should “put up money.”

He also used the moment to again suggest that the Biden family inappropriately benefited from their ties to Ukraine.

Trump’s order was first reported by The Washington Post and was confirmed to The Associated Press by two people familiar with but not authorized to discuss private conversations. They spoke on the condition of anonymity.

Late Monday, an influential group of freshmen Democrats who served in the military and national security before winning office said Trump’s actions cut to the core of the country’s defenses. Their views, as centrist lawmakers from previously Republican-held districts where Trump has been popular, hold sway with party leadership.

At issue is a summer phone call with Ukrainian President Voldymyr Zelenskiy, in which Trump is said to have pushed for investigations into Biden. In the days before that call, Trump ordered the aid to Ukraine frozen.

Trump has insisted he did nothing wrong and has denied that any requests for help in procuring damaging information about Biden were tied to the aid freeze.

The United States began providing military aid to the government of Ukraine shortly after Russia illegally annexed Ukraine’s Crimean peninsula in 2014. With Ukraine’s new president still grappling with separatist rebels in the east, the aid has long been viewed as a measure of Washington’s determination to push back against Russian President Vladimir Putin.

Democrats, and some Republicans, have urged the White House to be open about Trump’s actions, which are at the center of a whistleblower complaint. But with no new information from the administration forthcoming, more than a dozen Democrats, including some in House leadership, added their names to those calling for impeachment proceedings.

The sudden rush of activity shows the extent to which Trump’s call to the foreign leader, and his subsequent comments about the conversation, are raising further questions about whether the president improperly used his office to pressure another country as a way of helping his own reelection prospects.

“These allegations are stunning, both in the national security threat they pose and the potential corruption they represent,” wrote the seven freshmen, who include a former Navy pilot, soldiers, officers and intelligence analysts.

“We do not arrive at this conclusion lightly,” the lawmakers wrote in a Washington Post op-ed. The lawmakers include Reps. Gil Cisneros of California, Jason Crow of Colorado, Chrissy Houlahan of Pennsylvania, Elaine Luria of Virginia, Mikie Sherrill of New Jersey, Elissa Slotkin of Michigan and Abigail Spanberger of Virginia.

“These new allegations are a threat to all we have sworn to protect. We must preserve the checks and balances envisioned by the Founders and restore the trust of the American people in our government. And that is what we intend to do.”

Congress on Monday pressed for full disclosure of a whistleblower’s complaint about Trump and pushed the White House to release a transcript of Trump’s call with the Ukraine president.

The president has acknowledged the phone call. On Monday, he said he didn’t want to give money to Ukraine — if there were corruption issues.

Later Monday, Trump denied telling the Ukraine president that his country would only get U.S. aid if it investigated Biden’s son. “I didn’t do it,” he said.

The fresh calls for impeachment proceedings come as House Democrats are heading into a closed-door meeting Tuesday with Speaker Nancy Pelosi.

Pelosi and her leadership team on the various oversight committees are considering bringing forward a resolution that will put the House on the record on this matter, according to a Democratic leadership aide unauthorized to discuss the private talks. The aide was granted anonymity.

Still, Democrats remained divided on moving forward with an effort to impeach Trump. Pelosi has resisted calls for impeachment and is sticking with her position that Congress must not start formal proceedings unless the American public demands it.

However, Pelosi said Sunday that unless the administration provides more information to Congress by the scheduled Thursday hearing at the intelligence committee, its officials “will be entering a grave new chapter of lawlessness which will take us into a whole new stage of investigation.”

Trump has sought, without evidence, to implicate Biden and his son Hunter in the kind of corruption that has long plagued Ukraine. Hunter Biden served on the board of a Ukrainian gas company at the same time his father was leading the Obama administration’s diplomatic dealings with Kyiv. Though the timing raised concerns among anti-corruption advocates, there has been no evidence of wrongdoing by either the former vice president or his son.

The matter is under new scrutiny following the whistleblower’s mid-August complaint, which followed Trump’s July 25 call with Ukraine’s president. The person who filed the complaint did not have firsthand knowledge of the call, according to a person familiar with the matter.

Lawmakers are demanding details of the complaint, but the acting director of national intelligence, Joseph Maguire, has refused to share that information, citing presidential privilege. He is set to testify Thursday before the House.

The chairmen of the House intelligence, Foreign Affairs and Oversight and Government Reform committees are threatening to subpoena Secretary of State Mike Pompeo if he does not produce information about whether Trump and his lawyer, Rudy Giuliani, inappropriately tried to influence the Ukraine government for political gain.

Meanwhile, Senate Democratic leader Chuck Schumer of New York called on Republican Majority Leader Mitch McConnell to investigate the whistleblower’s complaint. In a letter to McConnell, he said that the Republicans’ “see no evil, hear no evil” attitude toward the president’s actions “is unacceptable and must change.”

Republican Sen. Marco Rubio of Florida doesn’t think Trump’s actions are grounds for impeachment, but said he wouldn’t have called a foreign leader to discuss a rival.

“I don’t think he should have raised the topic of Joe Biden with the Ukraine president,” Rubio said.

McConnell said Monday the matter is best left behind closed doors in the classified setting of the intelligence committee, though he did push into the spotlight his own role in securing the Ukraine aid.

McConnell said he had been “personally pressuring” the Trump administration this summer in calls to Pompeo and Secretary of Defense Mark Esper to release the U.S. aid money.

Trump said Monday he may, or may not, release details or a transcript of the call but has stressed that foreign leaders should feel free to speak frankly with an American president without fear that the details of their conversations will later be disclosed.

Hunter Biden was hired by the Ukrainian gas company Burisma Holdings in April 2014, two months after Ukraine’s Russia-friendly former president was ousted by protesters and as Biden’s father was heavily involved in U.S. efforts to support the new pro-Western government. The move immediately raised concerns that the Ukrainian firm, whose owner was a political ally of the ousted president, was seeking to gain influence with the Obama administration.