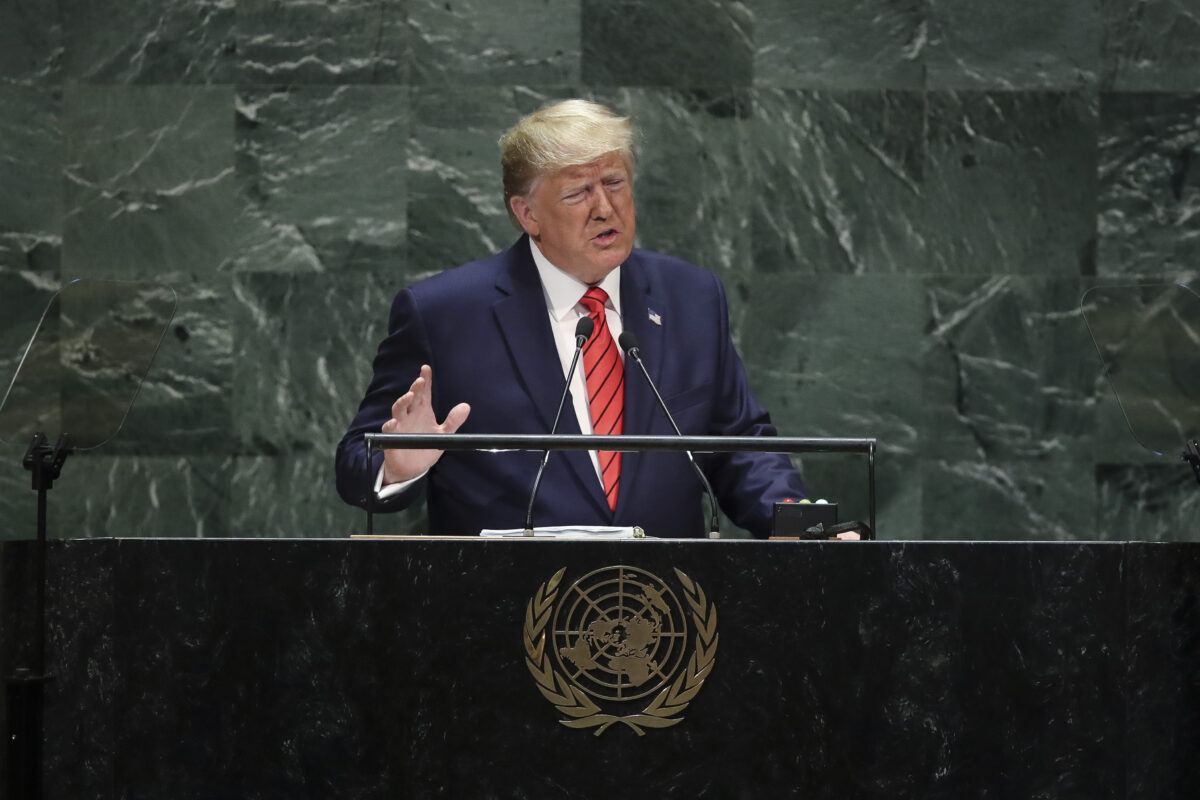 President Donald Trump promised to tighten sanctions against Iran unless the country changes its “menacing behavior,” as he called on other nations to ramp up their pressure in the wake of the recent attacks on Saudi oil facilities.

In a Sept. 24 address to the United Nations General Assembly, Trump delivered a stern message to Tehran and warned of further action by the United States in his third annual appearance at the gathering of world leaders.

“All nations have a duty to act,” he said. “No responsible government should subsidize Iran’s bloodlust. As long as Iran’s menacing behavior continues, sanctions will not be lifted, they will be tightened.”

A day earlier, France, Britain, and Germany joined the United States in saying Iran was responsible for the Saudi attacks. The countries called on Tehran to agree to negotiations on its nuclear and missile programs as well as other regional security issues during the first day of U.N. meetings.

Trump ordered on Sept. 18 an escalation of already unprecedented sanctions on Iran after drones and cruise missiles struck an oil field and two large oil processing facilities in Saudi Arabia on Sept. 14. Iran has denied responsibility for the attacks.

During his speech in New York, Trump described Tehran as one of the “greatest security threats facing peace-loving nations today” and said the regime was “repressive,” pointing to the fact that the country was the No. 1 state sponsor of terrorism.

Trump also had tough comments against Iran’s leaders, accusing them of fueling the wars in both Syria and Yemen.

“Iran’s leaders will have turned a proud nation into another cautionary tale of what happens when a ruling class abandons its people and embarks upon a crusade for personal power and riches,” he said.

Over the weekend, the president said he had no plans to meet with Iran on the sidelines of the U.N. meetings. As he gave his speech on Sept. 24, an Iranian diplomat sat in the country’s second-row seat while the country’s President Hassan Rouhani was at his New York hotel.

While Iran-backed Houthi rebels in Yemen claimed responsibility for the attacks, the Saudis displayed drone and missile debris as “undeniable” evidence of Iranian involvement.

“The regime is squandering the nation’s wealth and future on a fanatical quest for nuclear weapons,” Trump said. “We must never allow this to happen.”

Rouhani told media on Sept. 24 that he was open to discussing small changes to the 2015 nuclear deal with world powers if the United States would lift its sanctions. Iran has begun enriching its uranium beyond the terms of the deal, which the United States unilaterally withdrew from more than a year earlier.

The Trump administration has ordered deployment of additional troops and missile defense equipment to Saudi Arabia and the United Arab Emirates over the past week. Gen. Joseph Dunford, chairman of the Joint Chiefs of Staff, said last weekend that the extra equipment and troops would give the Saudis a better chance of defending against unconventional aerial attacks.

Trump also urged Iran’s leaders to put their people first and to stop their aggression toward other countries.

The president also suggested a pathway to peace in saying that the United States “has never believed in permanent enemies.” He pointed to the “bold diplomacy” his administration has taken with North Korea as an example.

“We want partners, not adversaries,” Trump said. “America knows that while anyone can make war, only the most courageous can choose peace.”