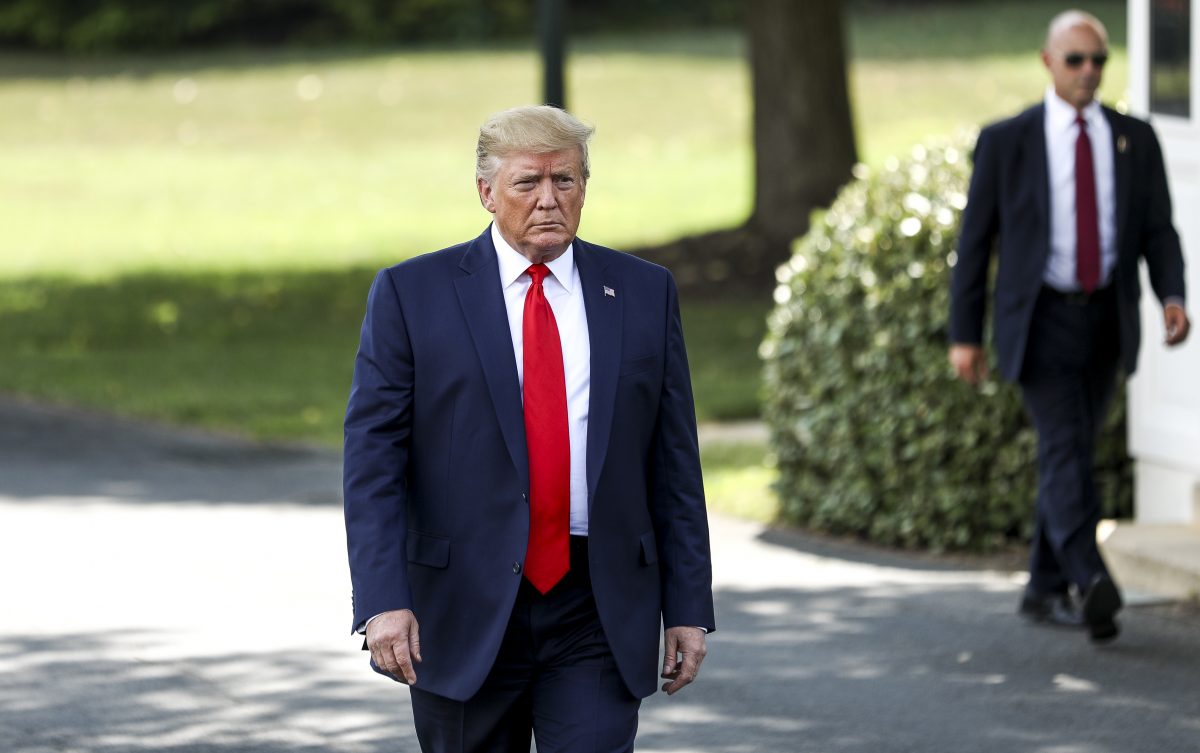 President Donald Trump condemned the two mass shootings that took place over the weekend in an Aug. 4 proclamation that honored the victims in Dayton, Ohio, and El Paso, Texas, as he ordered the U.S. flag to be flown at half-staff at the White House and all other public buildings.

“We condemn these hateful and cowardly acts,” Trump said in the proclamation. “Through our grief, America stands united with the people of El Paso and Dayton. May God be with the victims of these two horrific crimes and bring aid and comfort to their families and friends.”

“Our Nation mourns with those whose loved ones were murdered in the tragic shootings in El Paso, Texas, and Dayton, Ohio, and we share in the pain and suffering of all those who were injured in these two senseless attacks,” he said.

In Dayton, nine people were killed and dozens more were wounded after a man clad in body armor fired into a downtown district on Aug. 4. He was shot dead by police shortly after opening fire. A motive wasn’t immediately clear.

In El Paso, Texas Gov. Greg Abbott and law enforcement said 20 people were killed and 26 others wounded on Aug. 3 in a shopping center attack. The suspect is currently in custody and his motives are under investigation.

An alleged “manifesto” of the Texas assailant was posted before the attack on the website 8chan. In it, he criticizes both the Democrat and Republican parties.

Trump noted on Aug. 4 that the FBI would be assigned to investigate the Ohio shooting. Deputy Press Secretary Steven Groves said Trump has been briefed on the Ohio incident and is monitoring the situation.

“The FBI, local, and state law enforcement are working together in El Paso and in Dayton, Ohio,” Trump said on Twitter. “Information is rapidly being accumulated in Dayton. Much has already be learned in El Paso. Law enforcement was very rapid in both instances.”

Later in the day, Trump told reporters, “Hate has no place in our country,” and noted he had spoken with Attorney General William Barr and FBI Director Christopher Wray over the shootings. Trump said, “A lot of things are being done right now,” and that “we have to get it stopped.” He said he would be making another statement on it tomorrow.

The assailant in the Ohio massacre was shot dead by nearby patrolling police officers within a minute. Law enforcement and Dayton Mayor Nan Whaley said the quick takedown most likely prevented a much higher death toll.

Whaley said that if the police hadn’t responded so quickly, “hundreds of people in the Oregon District could be dead today.” The assailant was carrying extra magazines on him as he opened fire.

The attacker, Whaley said, was carrying a .223-caliber rifle. Authorities said they believe there was only one attacker in the incident.

At least 26 other people were being treated for their injuries at local hospitals. Miami Valley Hospital spokeswoman Terrea Little said the hospital had received 16 victims, but she couldn’t confirm their conditions. Kettering Health Network spokeswoman Elizabeth Long said multiple victims from the shooting had been treated, but she didn’t have details on how many.

“I’m heartbroken,” Whaley said on Twitter. “Thank you to our first responders for all that you’ve done. We will share updates as we have more information.”

Nikita Papillon, 23, was across the street at Newcom’s Tavern when the shooting started. She said she saw a girl she had talked to earlier lying outside Ned Peppers Bar.

“She had told me she liked my outfit and thought I was cute, and I told her I liked her outfit and I thought she was cute,” Papillon told The Associated Press. She herself had been to Ned Peppers the night before, describing it as the kind of place “where you don’t have to worry about someone shooting up the place.”

One police official said he believed most of the victims in the attack were shot at a Walmart located near the Cielo Vista Mall.

Crusius later surrendered to police as panicked shoppers and employees ran for cover. U.S. Attorney John Bash said they are treating the El Paso shooting “as a domestic terrorism case.”

In his manifesto, Crusius attacks both major political parties, according to an online copy of it posted on Drudge Report. Investigators said they were “reasonably confident” that Crusius penned the manifesto.

Crusius, at one point in the document, calls out Democrats for using open borders and free health care to pander to illegal immigrant voters. In another instance, he said the “Republican Party is also terrible” and criticized them for being “pro-corporation.” He also talked about a “Hispanic invasion of Texas.”

Later in the manifesto, Crusius expresses support for socialist policies under “Economic Reasons.” He talks about how America should “initiate a basic universal income” and the need to achieve social projects “like universal healthcare.”

At the end, the attacker noted that his ideology hadn’t changed for “several years.”

“My opinions on automation, immigration, and the rest predate Trump and his campaign for president,” he wrote. “[I’m] putting this here because some people will blame the President or certain presidential candidates for the attack. This is not the case.

“I know that the media will probably call me a white supremacist anyway and blame Trump’s rhetoric,” he continued. “The media is infamous for fake news.”

An off-duty soldier who was at the Texas mall near the Aug. 3 deadly mass shooting was hailed as a hero after recounting how he and another man tried to carry children to safety.

Army Pfc. Glendon Oakley Jr. described for local television channel KTSM how he was buying a sports jersey at El Paso’s Cielo Vista Mall, when a child ran into the store and said there was an active shooter at the nearby Walmart.

He said he recently received a license to carry a firearm and had his gun with him. “We’re trained, when you hear gunshots, to pull out your weapon and think fast,” he said. “It’s a feeling that you can’t explain.”

Oakley said that as he tried to make it to the parking lot, he saw “a whole bunch” of children running around without their parents, some crying.

“So I pick up as many as possible and carry them with me and another guy does as well,” he said, before apologizing to the KTSM reporter: “I’m sorry, I’m shaking.”

The Associated Press and Reuters contributed to this report