Trump: Democrats Not Willing to Make a Stimulus Deal Because It Would Benefit Reelection 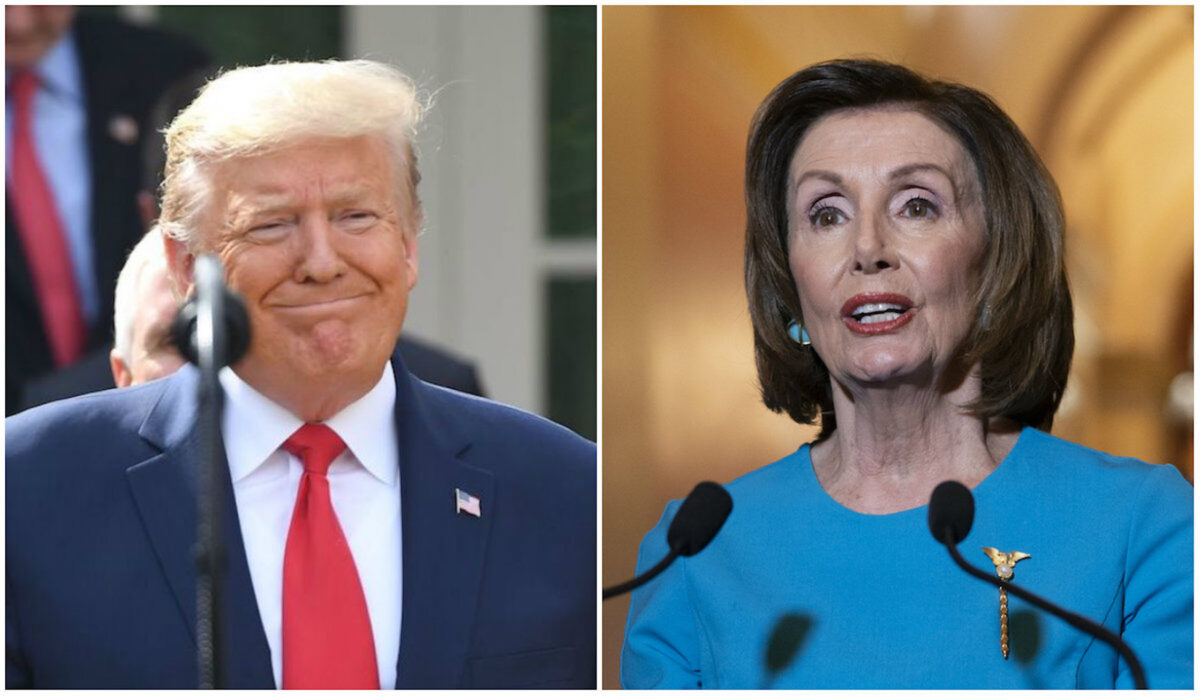 President Donald Trump on Sept. 7 accused top Democratic negotiators of not wanting to make a deal on a stimulus package because it would benefit him and his chances of being reelected in November.

Asked about why he didn’t meet with top Democrats about stimulus negotiation, he said that House Speaker Nancy Pelosi (D-Calif.) and Senate Minority Leader Chuck Schumer (D-N.Y.) “don’t want to make a deal.”

“They think it’s good for politics if they don’t want to make a deal,” Trump said at a Labor Day press conference at the White House. “These are people I don’t have a lot of respect [for].”

“I don’t need to meet with them and be turned down,” he said, adding that talks are stalled because a deal would be “good for the economy” and would benefit Trump’s chances of being reelected.

“They think that if the country does as badly as possible … that’s good for the Democrats,” Trump said.

Democrats and the White House remain at an impasse on a stimulus package, a month after the two parties held negotiations. One of the sticking points is whether to provide $1 trillion in federal funding to state and local governments, which Republicans don’t support.

At around the same time as Trump’s conference, Schumer wrote on Twitter that “it’s Labor Day, and President Trump still doesn’t have an adequate national testing strategy.”

The tweet came hours after he said Republicans in the Senate need to pass the $3.4 trillion HEROES Act “immediately.” That bill passed in the House of Representatives in May, but it hasn’t been taken up by the Republican-controlled Senate.

Pelosi’s office didn’t immediately respond to a request for comment.

Pelosi, in a statement on Sept. 7, again called for Republicans to pass the HEROES Act.

“Sadly, this Labor Day, America’s workers are facing the staggering assault on their health and economic security from the unprecedented coronavirus crisis,” she wrote. “Yet, with millions of workers still unemployed and millions more at risk of losing their jobs, Republicans and the Trump Administration continue to ignore the scale of the crisis and refuse to lift a finger to help working families.”

The measures are designed to limit economic damage caused by the CCP (Chinese Communist Party) virus pandemic as well as associated stay-at-home measures and lockdowns.

“We’ll do something to help cities,” Trump said, but the $1 trillion “bailout” is too high.

Pelosi last week accused Trump of stonewalling, adding that the 8.4 percent unemployment rate “is a reminder of the urgent need to enact the #HeroesAct, as the economic recovery stimulated by Congress’s early & robust investments continues to slow down.”

It came as Treasury Secretary Steven Mnuchin said the White House and top Democrats have agreed to a continuing resolution to keep the government funded at the end of this month.

“We’re going to move forward with a clean CR [continuing resolution], hopefully through the beginning of December,” Mnuchin told reporters at the White House.

“The president and I believe we should do more stimulus,” he said. “We have about 7 and a half million jobs we need to get back until we’re back to where we were and we want to help small businesses, we want to help businesses that are particularly impacted by this and we’ll continue to work on proposed new legislation.”

Mnuchin added that Senate Republicans are moving ahead with a smaller CCP virus package this week.

The Senate is slated to return to Capitol Hill after Labor Day.