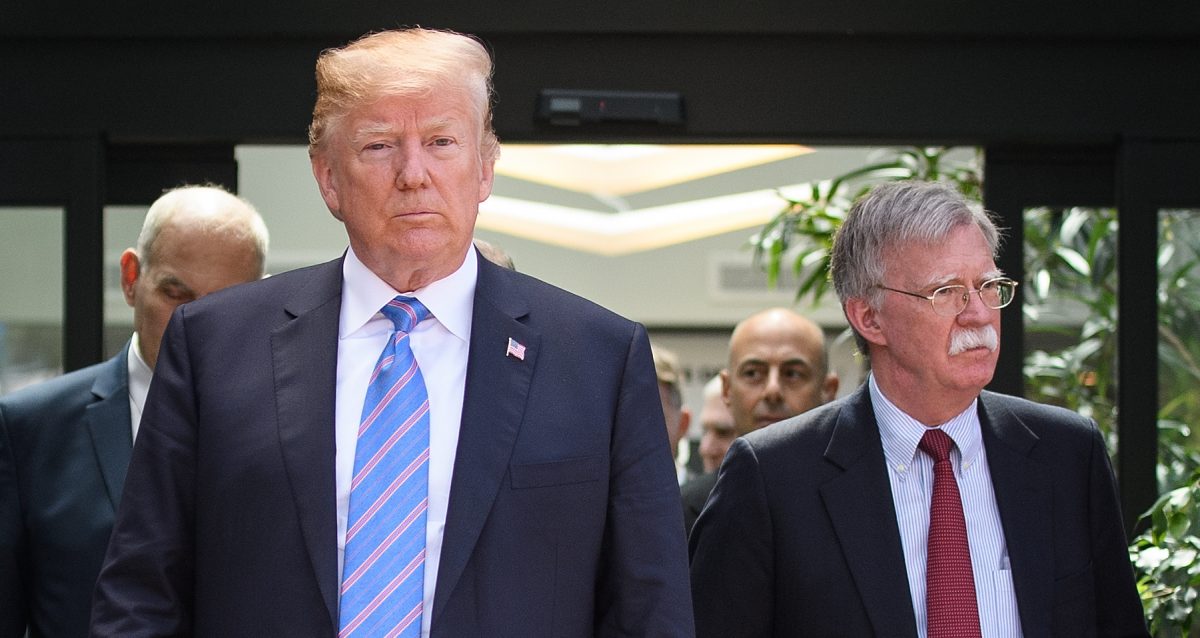 “I informed John Bolton last night that his services are no longer needed at the White House,” Trump wrote on Twitter.

“I disagreed strongly with many of his suggestions, as did others in the Administration, and therefore, I asked John for his resignation, which was given to me this morning.”

Trump thanked Bolton for his service. The president said he will name a new national security adviser next week.

Secretary of State Mike Pompeo, who is part of the national security team, said Trump was well within his rights to fire Bolton. Pompeo acknowledged that he has disagreed with Bolton many times.

“The president is entitled to the staff that he wants at any moment,” Pompeo said during a briefing at the White House shortly after news of Bolton’s exit. “He should have people that he trusts and values and whose efforts and judgments benefit him in delivering American foreign policy.”

Addressing questions on whether U.S. foreign policy in regards to Iran would change with Bolton’s departure, Treasury Secretary Steven Mnuchin told reporters that the Trump administration is aligned in pursuing a maximum pressure campaign against the Islamic regime.

“We’ve done more sanctions on Iran than anybody, and it’s absolutely working,” Mnuchin said, adding that Trump’s offer to meet the Iranian president with no preconditions still stands.

Sen. Lindsey Graham (R-S.C.) said that he found Bolton to “to be accessible and always pursuing an agenda that not only helps the President but makes America safe.”

“I hope the president will choose someone with a strong background in national security and a world view that there is no substitute for American power when it comes to world order and that strength is better than weakness,” Graham said in a statement.

Harry Kazianis, a senior director at the Center for the National Interest, said that the firing of Bolton was “long overdue and a smart move for Team Trump.”

“While there are many possible candidates that Trump could reach out to, the current North Korea Special Representative Stephen Biegun, who already has decades of government and foreign policy expertise, could be a strong choice,” Kazianis said in an emailed statement.

“Douglas MacGregor, a favorite on Fox News and a retired U.S. Army Colonel who is very much in line with Trump’s restrained foreign policy vision, is also very much worth consideration.”

Pompeo noted that Trump has stuck to the foreign policies he spoke about while on the campaign trail. The departure of any one cabinet official will not change Trump’s stance, he said.

“I don’t think any leader around the world should make any assumption that because someone of us departs, that President Trump’s foreign policy will change in a material way,” Pompeo said.

Mnuchin pointed out that Trump and Bolton had conflicting views on the Iraq War.

Trump and Bolton gave differing accounts of the departure.

“I offered to resign last night and President Trump said, ‘Let’s talk about it tomorrow,’” Bolton wrote on Twitter minutes after Trump issued a pair of messages about accepting Bolton’s resignation.

Since joining the administration in early 2018, Bolton has espoused skepticism about the president’s relations with North Korea and has advocated against Trump’s decision in 2018 to pull U.S. troops out of Syria. He masterminded a quiet campaign inside the administration and with allies abroad to persuade Trump to keep U.S. forces in Syria to counter the remnants of the ISIS and Iranian influence in the region.

Bolton was also opposed to Trump’s now-scrapped plan to bring Taliban negotiators to Camp David on Sept. 8 to try to finalize a peace deal in Afghanistan.

One Republican familiar with the disagreements between Trump and Bolton said the adviser’s opposition to a possible meeting between Trump and Iranian President Hassan Rouhani was a precipitating factor in the dismissal.

Bolton’s ouster came as a surprise to many in the White House. Just an hour before Trump’s tweet, the press office announced that Bolton would join Pompeo and Mnuchin in a briefing. A White House official said that Bolton had departed the premises after Trump’s tweet and would no longer appear as scheduled.

In a further sign of acrimonious relationship, a person close to Bolton told reporters that they had been authorized to say one thing—that since Bolton has been national security adviser, there have been no “bad deals” on Iran, North Korea, Russia, and Syria. The person, who did not divulge who had given the authorization, wasn’t allowed to discuss the issue by name and spoke only on condition of anonymity.

When asked to respond to the person’s comment, White House press secretary Stephanie Grisham smiled and told reporters: “I don’t know how to read” it. “Sounds like just somebody trying to protect him,” she said.

Bolton has championed hawkish foreign policy views dating back to the Reagan administration and became a household name over his vociferous support for the Iraq War as the U.S. ambassador to the U.N. under George W. Bush. Bolton briefly considered running for president in 2016.

Trump has admired Bolton for years, praising him on Twitter as far back as 2014. Trump has told allies he thinks Bolton is “a killer” on television.