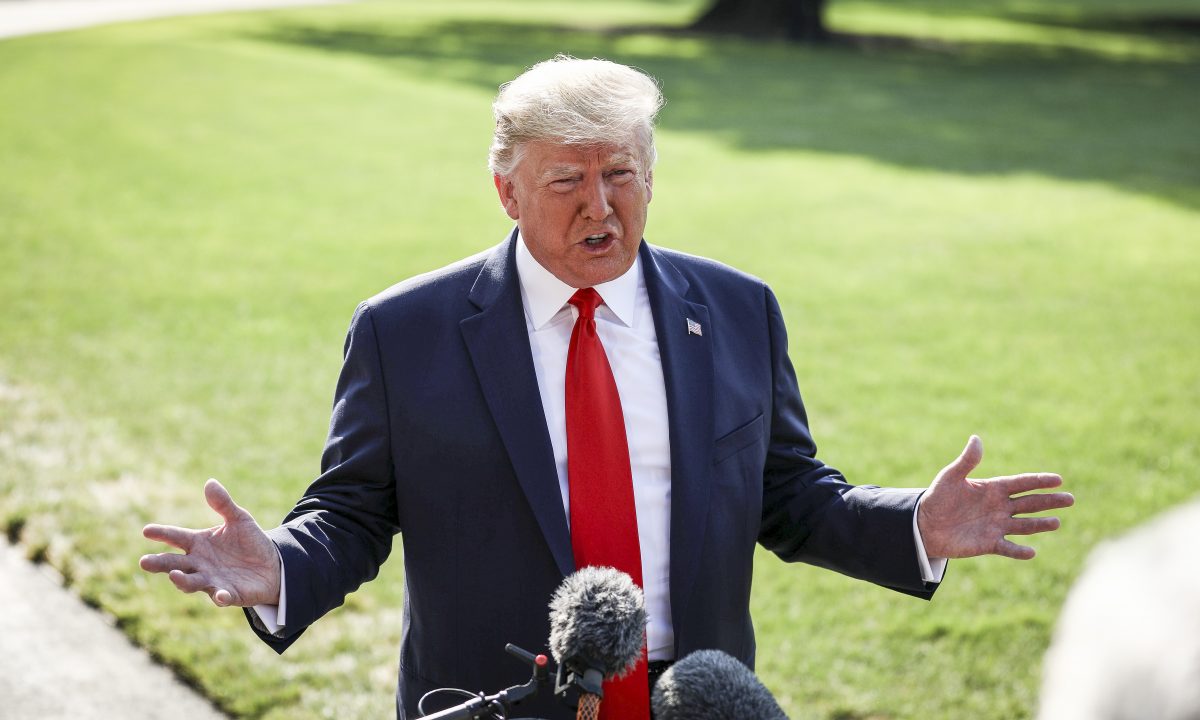 President Donald Trump on Sept. 16 questioned Iran’s denial of involvement in the recent drone attacks on oil facilities that knocked down half of Saudi Arabia’s daily production.

He compared it to an earlier claim Iran made after shooting down an American drone in June.

“Remember when Iran shot down a drone, saying knowingly that it was in their ‘airspace’ when, in fact, it was nowhere close,” Trump said in a tweet. “They stuck strongly to that story knowing that it was a very big lie. Now they say that they had nothing to do with the attack on Saudi Arabia. We’ll see?”

Remember when Iran shot down a drone, saying knowingly that it was in their “airspace” when, in fact, it was nowhere close. They stuck strongly to that story knowing that it was a very big lie. Now they say that they had nothing to do with the attack on Saudi Arabia. We’ll see?

The attacks interrupted nearly 58 percent of Saudi Arabia’s and more than 5.5 percent of the world’s daily oil production, based on August numbers from the U.S. Energy Information Administration. Oil prices hiked nearly 16 percent since Sept. 13, reaching more than $69 per barrel in the early afternoon of Sept. 16, based on the leading oil price index, Brent Crude.

Two sources briefed on Aramco’s operations told Reuters it might take months for Saudi oil production to return to normal.

U.S. officials said they believed the attacks came from the opposite direction, possibly from Iran itself rather than Yemen, and may have involved cruise missiles.

Missile fragments found after the attacks suggest it was either the Iranian-made Soumar cruise missile or the Quds-1 missile used by Houthis, which is “clearly derived from the Soumar,” said Rick Fisher, senior fellow on Asian Military Affairs at the International Assessment and Strategy Center, a Virginia-based think tank.

He said the Soumar missile was reverse-engineered from the Russian KH-55, obtained by China from Ukraine in the 1990s.

A Saudi-led military alliance battling the Houthis said the attack was done with Iranian weapons and was not launched from Yemen, according to preliminary findings.

China Behind the Curtain

Fisher pointed to China as the beneficiary of the escalation of Saudi–Iranian tensions.

“But when you look at the systems that are being employed, it’s very clear that in the Middle East, China is trying to play both sides against the middle [the United States] for the ultimate benefit of China.”

China has been buying oil from and supplying military technology to both Iran and Saudi Arabia in an effort to make both countries dependent on it. That makes the U.S. position more difficult: If the United States engages too much with the conflict, it could be drawn into a war. If it disengages too much, China may eventually sweep in, posing as a peacemaker, using its leverage on both sides to make the conflict deescalate, thus politically displacing U.S. influence in the region, Fisher said.

Trump seems to be countering China’s influence on Riyadh. He’s approved massive arms sales to the Saudis, who have fought the Houthis in the Yemeni civil war since 2015. The U.S. military provides intelligence and targeting support to Saudi airstrikes, as well as mid-flight refueling to its aircraft.

Trump has consistently said he’s ready both for a conflict as well as negotiations with Tehran, saying he’s hoping for the latter. He also has said the United States is not seeking a regime change in Iran and has predicted Iran will eventually start negotiating as the sanctions squeeze its economy.

Iranian President Hassan Rouhani said on Aug. 27 that he would only meet Trump if the sanctions were lifted.

Pompeo laid out 12 demands last year that Iran needs to comply with before the sanctions are lifted, such as ending its ballistic missile program, verifiably abandoning any military dimension to its nuclear program, curtailing its nuclear program to avoid the means of producing nuclear weapons-grade plutonium, stopping its support of terrorist groups and militias including Hezbollah, Hamas, and the Houthis, and withdrawing its forces from Syria.

Iran seems to have escalated aggressive actions in the region since the United States withdrew from the Iran nuclear deal in 2018 and reimposed sanctions on much of the Iranian economy.

After the U.S. drone was shot down on June 20, Trump said he called off a retaliatory strike at the last moment to prevent loss of life. Instead, he ordered cyber attacks on Iranian targets, multiple media reported.

A week earlier, on June 13, two oil tankers were attacked near the strait in the Gulf of Oman. The United States has blamed Iran, which denied responsibility. The U.S. military then released video and images that appear to show Iran’s Revolutionary Guards Corps removing a mine from the hull of one of the tankers, suggesting that Iran sought to remove evidence of its involvement.

Iran also attempted to shoot down a U.S. drone arriving at the scene of the attacks, according to a Fox News report that cited a senior U.S. official.

On July 4, authorities in Gibraltar, with the United Kingdom’s assistance, seized an Iranian oil tanker that they said was smuggling oil to Syria in breach of European Union sanctions. Iran denied the allegation and on July 19 seized a Sweden-owned tanker flying a British flag.

On July 18, a U.S. amphibious assault ship shot down an Iranian drone in what Trump described as a “defensive action.”

On July 22, Iran claimed to have captured 17 CIA spies, which Trump said is false.

And on Aug. 20, a U.S. drone was shot down by a surface-to-air missile over Yemen, multiple media reported.

The Iran nuclear deal, called the Joint Comprehensive Plan of Action, was signed during the Obama administration by the five permanent members of the U.N. Security Council—the United States, Russia, China, the United Kingdom, and France—along with Germany.

On May 8, Trump announced that the United States would withdraw from the deal and reimpose “the highest level of economic sanction[s],” which had been lifted under the deal.

The two main concerns that the Trump administration had with the deal were that it included so-called sunset clauses, which would have allowed Iran to install thousands of advanced uranium centrifuges by 2026. Another concern was that Iran’s ballistic missile development was not covered under the agreement.

The withdrawal from the agreement came after Iran was given months of opportunity to renegotiate these parts of the deal.

Iran tried to salvage the deal with the remaining signatories, but the European nations largely failed to deliver on promises of devising a trade mechanism that would dodge U.S. sanctions.

On July 1, Iran announced that it had accumulated 300 kilograms of uranium hexafluoride, which would have put it in breach of the deal.

On July 7, Iranian officials announced that Tehran had begun to increase uranium enrichment to 5 percent concentration, beyond the limit set in the deal.

Update: The article has been updated with a further comment from President Donald Trump.