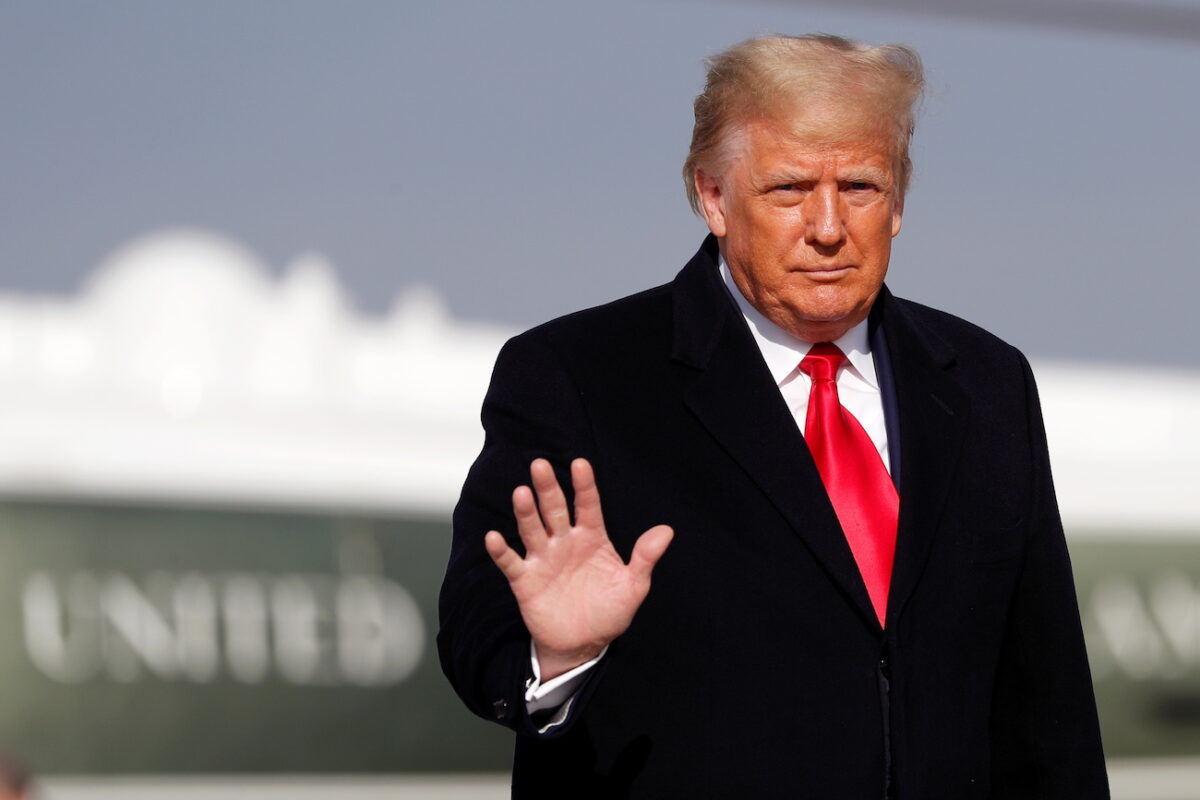 Trump’s signing of the bill, which includes a $900 billion COVID-19 relief package, means a partial government shutdown is now averted, while financial aid for Americans will be delivered.

“As President of the United States, it is my responsibility to protect the people of our country from the economic devastation and hardship that was caused by the China Virus,” Trump said in a statement.

“I am signing this bill to restore unemployment benefits, stop evictions, provide rental assistance, add money for PPP, return our airline workers back to work, add substantially more money for vaccine distribution, and much more.”

He added that “more money is coming” and vowed to “never give up” his fight for the American people.

This comes following a delay due to Congress’s failure to meet Trump’s demand to increase stimulus checks from $600 to $2,000 per person. Trump had repeatedly expressed dissatisfaction over what he described as “wasteful” spending in the bill while Americans continue to struggle due to pandemic lockdowns.

Although the bill, passed by both houses of Congress earlier this week, was sent to the White House on Christmas Eve, Trump did not immediately act on it but instead renewed his pressure on lawmakers to revisit portions of the omnibus bill and to increase direct payments for Americans.

The president said Sunday that along with signing the bill, he will invoke the 1974 Impoundment Control Act to demand “rescissions” be made to the spending measures. Under the Act, if the president wants to spend less money than Congress provided for a particular program, he can seek congressional approval to rescind by sending a special message to Congress identifying the amount he proposes to rescind, reasons for it, and the economic effects of the rescission.

“I will sign the Omnibus and Covid package with a strong message that makes clear to Congress that wasteful items need to be removed. I will send back to Congress a redlined version, item by item, accompanied by the formal rescission request to Congress insisting that those funds be removed from the bill,” he said.

Trump also noted that the House will vote to increase direct payments to $2,000 per person and $5,200 for a family of four on Monday, and that the Senate will also start the process for a vote.

House Speaker Nancy Pelosi urged the president to “immediately call on” Republican lawmakers to stop blocking legislation to increase the direct payment checks. But her statement was silent on actions regarding alleged voter fraud and legal protections under Section 230 of the 1996 Communications Decency Act for internet companies that have engaged in censoring or political conduct.

Trump said Congress has promised to review the law, which largely exempts online platforms from liability for content posted by their users although they can be held liable for content that violates anti-sex trafficking or intellectual property laws.

Trump and his administration have repeatedly underscored the risks of unbalanced policing of user content on social media platforms, claiming that many Big Tech companies are engaging in conduct that limits conservative viewpoints and stifles free speech. The president has urged Congress to roll back the liability protections and went so far as to veto a defense-spending bill over lawmakers’ failure to do so.

“Congress has promised that Section 230, which so unfairly benefits Big Tech at the expense of the American people, will be reviewed and either be terminated or substantially reformed,” he said. “Big Tech must not get protections of Section 230!”

Meanwhile, Trump also said that both houses of Congress agreed to “focus strongly” on the slew of evidence of voting irregularities that allegedly occurred during the 2020 presidential election. The president noted that the Senate will now be starting “an investigation into voter fraud.”

Senate Majority Leader Mitch McConnell (R-Ky.) applauded Trump’s decision to sign the bill in a statement. He, like Pelosi, did not mention a vote on increased checks, Section 230, or voter fraud.

The president and his legal team are fighting against the clock to seek a determination from the courts over mounting evidence they say raises questions over whether the 2020 election was stained by fraud and last-minute unconstitutional rule changes due to the measures introduced during the pandemic. If so, the president is seeking to invalidate ballots and allow state legislatures to decide on which electoral college votes should be counted on Jan. 6 during the joint session of Congress.

Trump has also demanded that Republican senators “step up and fight for the presidency” as lawmakers weigh in on whether to participate in a proposed effort to challenge electoral college votes on Jan. 6.