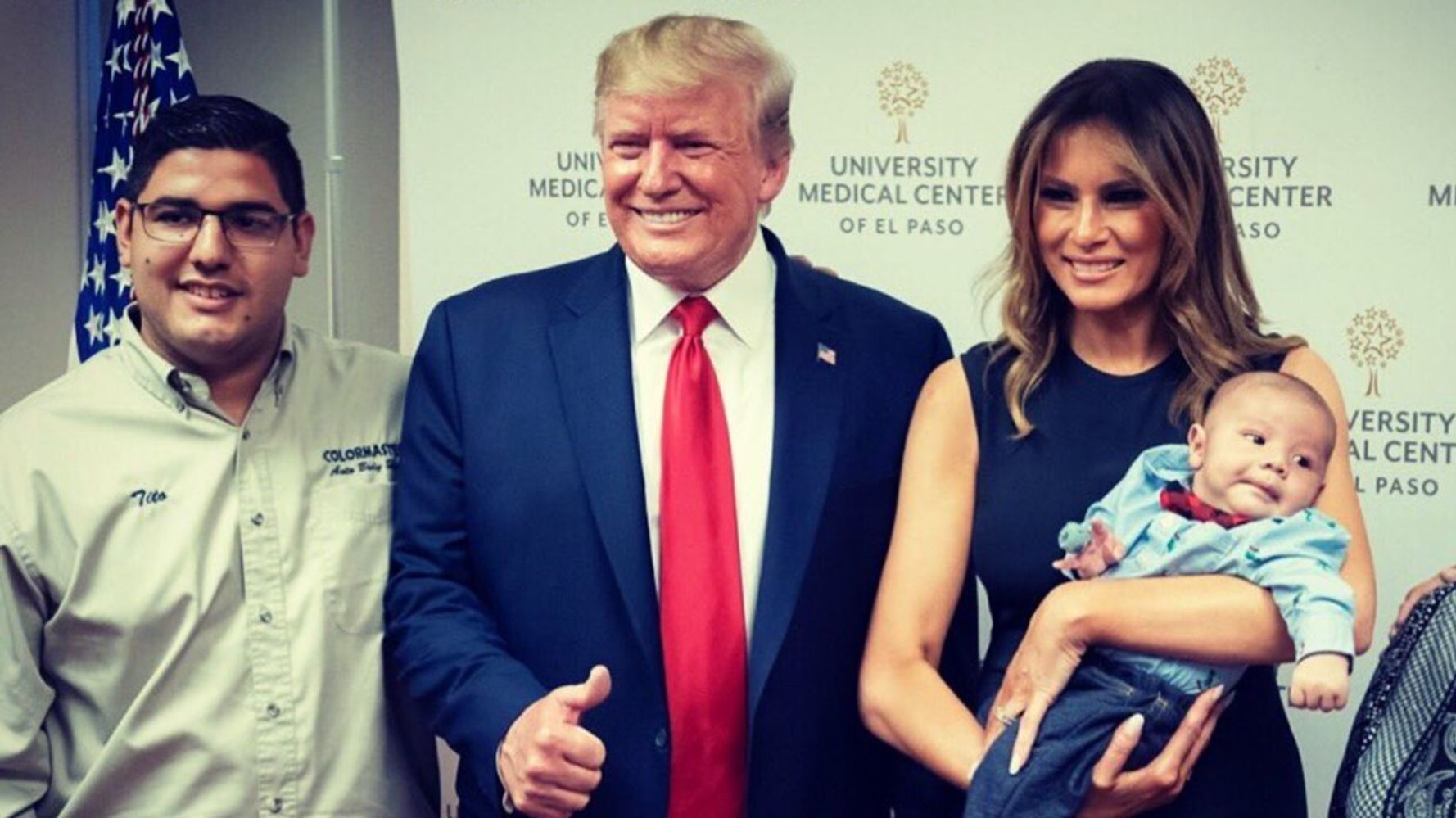 Critics on Twitter and news commentators harshly criticized a grinning President Donald Trump on Friday for his disturbingly discordant “thumbs up” photo with a 2-month-old baby orphaned in the mass shooting at a Walmart in El Paso, Texas.

Parents of the baby, Jordan and Andre Anchondo, were killed as they tried to protect their son in the massacre Saturday that killed 22 people. Baby Paul suffered broken fingers when his mother fell on him when she was shot. The suspected gunman told authorities he was targeting Mexicans, police said, and a manifesto authorities have linked to him echoed Trump’s words condemning a “Hispanic invasion” in the U.S.

The baby was brought to a hospital Trump was visiting at the request of two White House aides who were sent to his home, Paul’s grandfather told journalist David Alandete. Both the president and first lady Melania Trump, also smiling in the photo and holding the baby, posed with Paul. The first lady posted the picture on her Twitter account Thursday, which was the first time the photo appeared. The president’s oddly jocular pose is a bizarre contrast to the tragedy of the baby’s life.

I met many incredible people in Dayton, Ohio & El Paso, Texas yesterday. Their communities are strong and unbreakable. @potus and I stand with you! pic.twitter.com/SHzV6zcVKR

Atlantic writer Graeme Wood called the photo “obscene.” WYNC journalist Tanzina Vega said on CNN that there was a “tone-deafness” to Trump’s visits “as a whole” in El Paso and Dayton, Ohio, where a mass shooting Sunday left nine people dead and 27 injured.

Joe Lockhart, former press secretary for Bill Clinton during the Columbine High School massacre in 1999 and now a CNN commentator, indicated it wasn’t just the photo that was disturbing. He called Trump’s behavior in Dayton and El Paso — and afterward — “unprecedented” in the way he bashed critics and boasted of his own reception instead of placing the focus on victims and suffering communities. Video released by the White House of his hospital visits, where the press was barred, “looked like a campaign ad,” he said.

None of the eight victims still being treated at El Paso’s University Medical Center agreed to meet with Trump during his visit, The Washington Post reported. A hospital official told CNN that the general assessment was that there was an “absence of empathy” from Trump. During his hospital visit, the president boasted about the crowd size at his campaign rally in El Paso earlier this year and called former Rep. Beto O’Rourke, a city native and Democratic presidential candidate, “crazy.”

This baby was recently orphaned by a terrorist who parroted some of Trump’s rhetoric. His parents died trying to shield him. I’ve don’t think I’ve ever met anyone who would think the appropriate response would be flashing a smile and thumbs up. Something is wrong with him. pic.twitter.com/xSIGyIZ4tg

I am genuinely confused and horrified by this image. Am I taking this the wrong way?

Why is Trump and Melania posing, GRINNING, and giving a thumbs up with the infant who’s parents were murdered by the shooter in El Paso.

Seriously… WTH is going on? pic.twitter.com/0YA2hIQeP3

This child just lost both parents to a white supremacist who drove 10 hours to a Wal Mart to kill Hispanics because, like Trump, he was concerned about an immigrant invasion.

Why, exactly, are the President and First Lady smiling? Why the hell is he doing the thumbs up sign? pic.twitter.com/BzSTljzGB4

A hospital official tells CNN Trump showed “an absence of empathy” during his visit to El Paso. Also, Trump and FLOTUS both met baby who was shielded by parents who died in the shooting. The baby was brought back to the hospital to see the president. More on @CNNSitRoom tonight.

Baby Paul’s uncle, Tito Anchondo, who stood next to the president in the photo, told the El Paso Times that he and his family are Republicans and his brother was a Trump supporter. “I want him [Trump] to know our family stands with the president,” he told the newspaper. He also said he wanted to tell Trump what his brother did to protect his family that day.

Earlier he told NPR: “I want to see [Trump’s] reaction in person. I want to see if he’s genuine … and see if he feels maybe some kind of remorse for statements that he’s made.” He later told The Washington Post that the president was “just there as a human being, consoling us and giving his condolences,” and that he “wasn’t there to be pushing any kind of political agenda.”

Jordan Anchondo’s aunt, Elizabeth Terry, and her family declined to meet the president Wednesday. She would not comment on the photo. “There are families and real lives that were destroyed and shattered,” Terry told The Guardian. “We need to focus on the healing and the picking up the pieces, and not get thrust into any type of politics. It’s a time to mourn and grieve right now.”

Trump took several photos at the hospital smiling and giving a thumbs up. A White House official told the Post that aides have encouraged Trump to present a more empathetic manner.