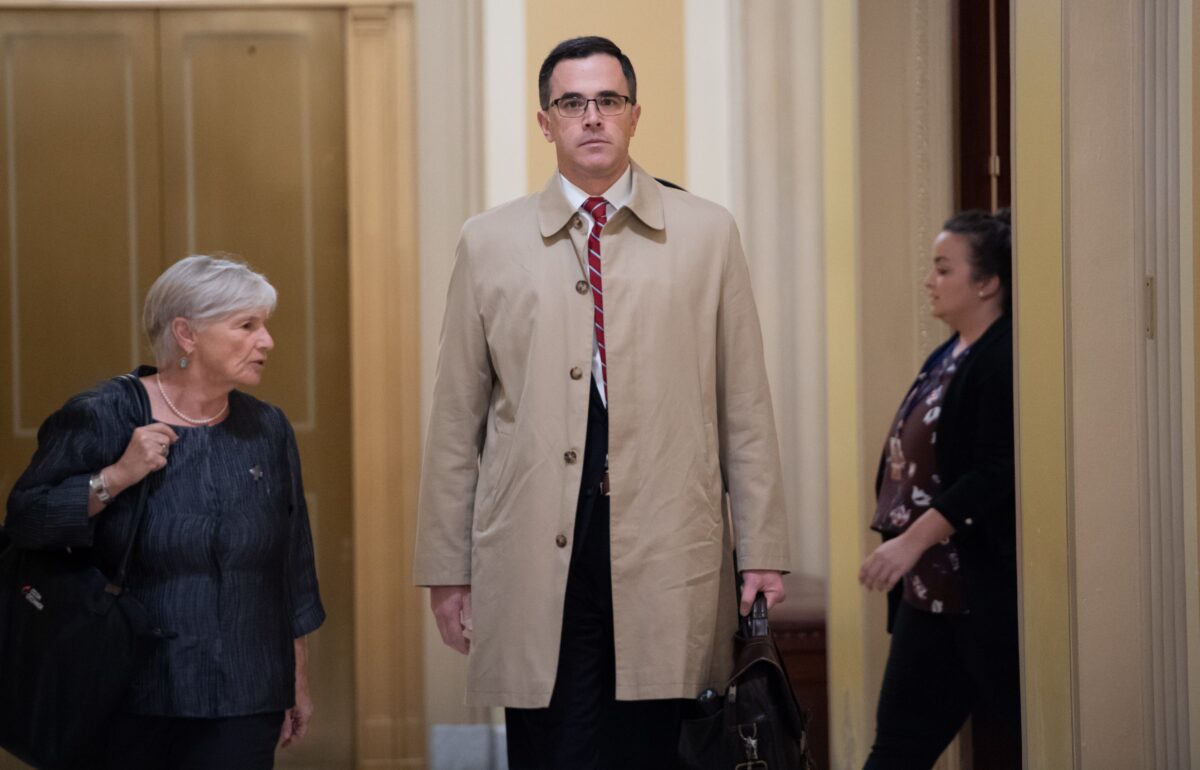 A top National Security Council official who listened in on President Donald Trump’s phone call with the leader of Ukraine on Oct. 31 told House lawmakers conducting the impeachment inquiry he thought there was nothing illegal in Trump’s request for the Ukrainian leader to investigate the business dealings of Hunter Biden, the son of former Vice President Joe Biden.

Tim Morrison, senior director for European affairs at the White House and the National Security Council, said that instead of being concerned with illegality in the call, he was wary about the memorandum of the conversation (MemCon) leaking to the media and how it would be perceived in Washington’s polarized environment.

“I had three concerns about a potential leak of the MemCon: first, how it would play out in Washington’s polarized environment; second, how a leak would affect the bipartisan support our Ukrainian partners currently experience in Congress; and third, how it would affect the Ukrainian perceptions of the U.S.–Ukraine relationship,” Morrison said, according to a copy of his opening statement obtained by CBS.

“I want to be clear, I was not concerned that anything illegal was discussed.”

Morrison said he reviewed the transcript of the call released by the White House and said it “accurately and completely reflects the substance of the call.”

In an example of the flaws of hearsay testimony, Morrison pointed out that his recollection contradicted two points in the testimony of Ambassador William Taylor.

“Ambassador Taylor wrote: ‘Ambassador Sondland told Mr. Yermak that security assistance money would not come until President Zelensky committed to pursuing the Burisma investigation.’ My recollection is that Ambassador Sondland’s proposal to Mr. Yermak was that it could be sufficient if the new Ukrainian prosecutor general—not President Zelensky—would commit to pursue the Burisma investigation,” Morrison said.

“I also would like to clarify that I did not meet with the Ukrainian National Security Advisor in his hotel room, as Ambassador Taylor indicated on page 11 of his statement. Instead, an NSC aide and I met with Mr. Danyliuk in the hotel’s business center.”

Morrison also corroborated the testimony of other witnesses regarding the Ukrainians’ knowledge of the temporary hold on military aid to Ukraine. Morrison said the Ukrainians didn’t know about the hold until Aug. 28, when the news leaked to the media.

Democrats are investigating, in part, whether the release of the aid was conditioned on Ukraine committing to the investigations Trump requested. Morrison told lawmakers that he learned of the connection between the aid and the investigations from Ambassador to the European Union Gordon Sondland.

“Even then I hoped that Ambassador Sondland’s strategy was exclusively his own and would not be considered by leaders in the Administration and Congress, who understood the strategic importance of Ukraine to our national security,” Morrison said.

During Morrison’s testimony, the House of Representatives voted along party lines to formalize the impeachment inquiry.

Morrison said he would submit his formal resignation to the White House after testifying.

“I have not submitted a formal resignation at this time because I do not want anyone to think there is a connection between my testimony today and my impending departure,” he said.

House Democrats haven’t specified what crime they believe Trump committed in his request to Zelensky. The anonymous whistleblower who triggered the impeachment inquiry claimed that the request may have constituted a campaign finance violation. The Justice Department reviewed the complaint and determined no further action is necessary.