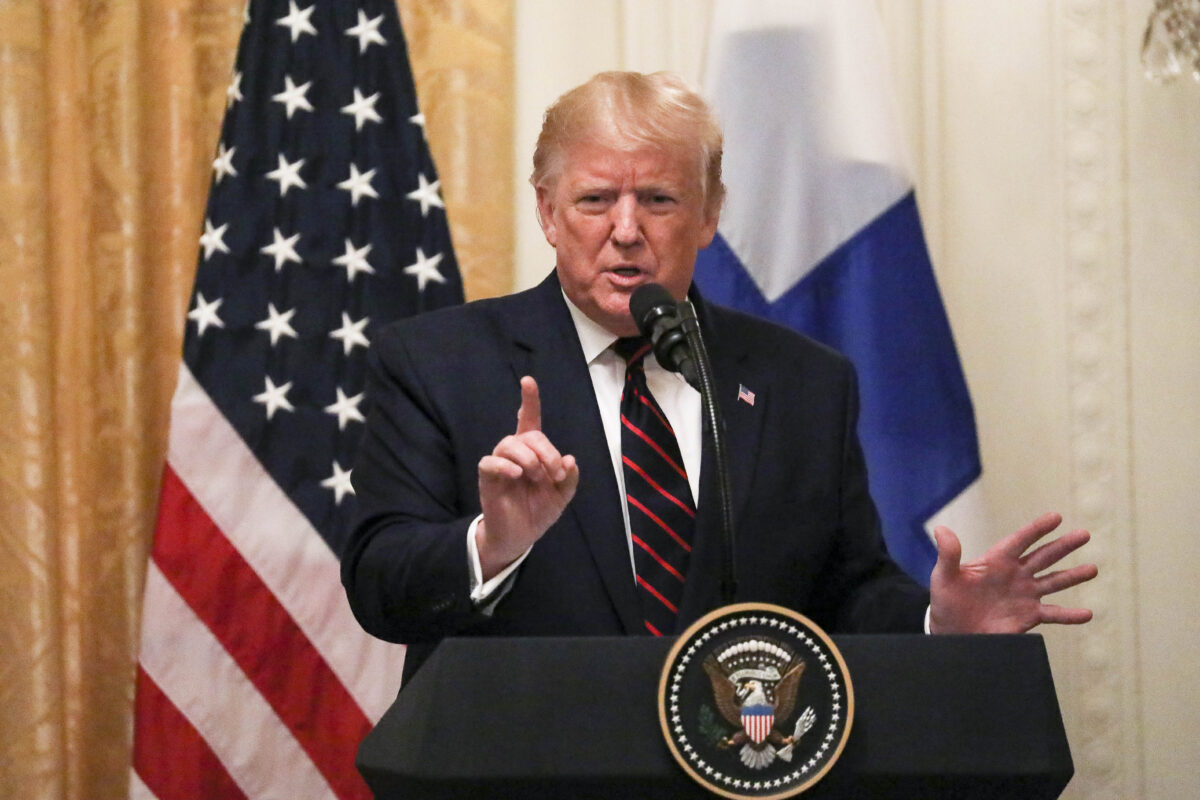 The White House plans to send a letter to House Speaker Nancy Pelosi (D-Calif.) to reject compliance with lawmakers’ demands until she holds a vote to approve their impeachment inquiry, according to a Fox News report.

According to the news broadcaster, the letter, which could be sent as early as Oct. 4, will have a tone similar to the letter by House Minority Leader Kevin McCarthy (R-Calif.) sent to Pelosi on Thursday.

Axios also confirmed the White House’s letter, citing two anonymous officials, reporting that the letter had been drafted by had not been finalized or signed as of Thursday night.

The White House did not immediately respond to a request to comment from The Epoch Times.

On Oct. 4, Trump told reporters at the White House that his administration would issue a letter to Pelosi.

“Well, we will be issuing a letter. As everybody knows, we have been treated very unfairly. Very different to everybody else,” Trump said.

McCarthy, in his letter (pdf), called on Pelosi to suspend the impeachment inquiry until she puts into place “transparent and equitable rules and procedures.”

“Unfortunately, you have given no clear indication as to how your impeachment inquiry will proceed—including whether key historical precedents or basic standards of due process will be observed,” McCarthy wrote. “In addition, the swiftness and recklessness with which you have proceeded has already resulted in committee chairs attempting to limit minority participation in scheduled interviews, calling into question the integrity of such an inquiry.”

He also requested a list of public responses to a slew of questions on Pelosi’s plans to hold the inquiry, including a question on whether she plans to hold a vote to authorize the probe.

In response, Pelosi shot back telling the Republican leader that “there is no requirement under the Constitution, under House Rules, or House precedent that the whole House vote before proceeding with an impeachment inquiry.”

“The existing rules of the House provide House Committees with full authority to conduct investigations for all matters under their jurisdiction, including impeachment investigations,” Pelosi wrote in her letter (pdf).

McCarthy’s letter prompted President Donald Trump to respond on Twitter: “Leader McCarthy, we look forward to you soon becoming Speaker of the House. The Do Nothing Dems don’t have a chance!”

Leader McCarthy, we look forward to you soon becoming Speaker of the House. The Do Nothing Dems don’t have a chance! https://t.co/uWPdGJg99F

The House launched an impeachment inquiry into the president based on media reports about alleged improper conduct during Trump’s call with Ukrainian President Volodymyr Zelensky. The call prompted an alleged whistleblower to file a complaint, alleging that the president was leveraging on his office to obtain “dirt” on a political opponent—2020 Democratic candidate Joe Biden.

A day after Pelosi launched the impeachment inquiry, the White House released a transcript of the Trump-Zelensky July 25 phone call. The transcript revealed that Trump had asked Zelensky to look into a technology firm that was hired by the Democratic National Committee, Crowdstrike, and look into Biden’s dealings with Ukraine when he was vice president. In 2018, Biden bragged that he pressured then-Ukrainian President Petro Poroshenko in 2016 to remove a prosecutor in charge of a probe of the private Ukrainian gas company, Burisma, where Biden’s son sat on the board.

Trump has repeatedly maintained that his phone call with the Ukrainian president was “perfect.” On Thursday, Trump reiterated this in a series of posts on Twitter.

“There wasn’t ANYTHING said wrong in my conversation with the Ukrainian President. This is a Democrat Scam!” he wrote.

There wasn’t ANYTHING said wrong in my conversation with the Ukrainian President. This is a Democrat Scam!

Later in the night, Trump wrote, “As the President of the United States, I have an absolute right, perhaps even a duty, to investigate, or have investigated, CORRUPTION, and that would include asking, or suggesting, other Countries to help us out!”

As the President of the United States, I have an absolute right, perhaps even a duty, to investigate, or have investigated, CORRUPTION, and that would include asking, or suggesting, other Countries to help us out!

Marc Ruskin, a former assistant district attorney in New York and an adjunct professor in criminal justice, said he did not think there were any facts in the transcript of Trump’s call with Ukraine that would constitute a crime under any statute. Ruskin is also a regular contributor to The Epoch Times.

“What he did do is ask them to conduct an inquiry to find out whether or not a crime had been committed in the past,” he added. “And that is not only not wrong, it’s just the opposite. … And it’s what countries do when they’re dealing with each other.”

Ruskin, also a 27-year veteran of the FBI and the author of “The Pretender, My Life Undercover for the FBI,” said he thinks the impeachment inquiry is “an end result in search of a vehicle.”

“They’re putting the cart before the horse, they have a goal in mind, which is impeachment, and the goal has been in their mind since before election night, essentially,” he said. “So what they’ve been looking for is a vehicle to allow them to reach that goal and impeach the president.”

Ruskin said that the Democrats essentially want to circumvent the democratic process while they “grasp at straws.” He used Rep. Al Green (D-Texas) as an example. Green told MSNBC in May that he was “concerned” that “if we don’t impeach the president, he will get reelected.”

“[Green] was saying that the President might be elected by to the democratic process, in other words, that he may be the choice of the American people and in order to circumvent that they need to impeach him,” Ruskin said. “So they want to circumvent the electoral process with their own judgment, rather than the will the people have expressed through elections.”

“I think they’re rewriting the rules as they go along,” he said. “Essentially, what they’re doing is they’re saying that the bar for impeachment is whatever we want it to be. They’re essentially disregarding precedent and tradition. If you look at prior presidents that have been impeached, they were all accused of having actually committed crimes, either perjury or accepting bribery.”

Update: Article updated to include President Trump’s comments about the letter made on Oct. 4.