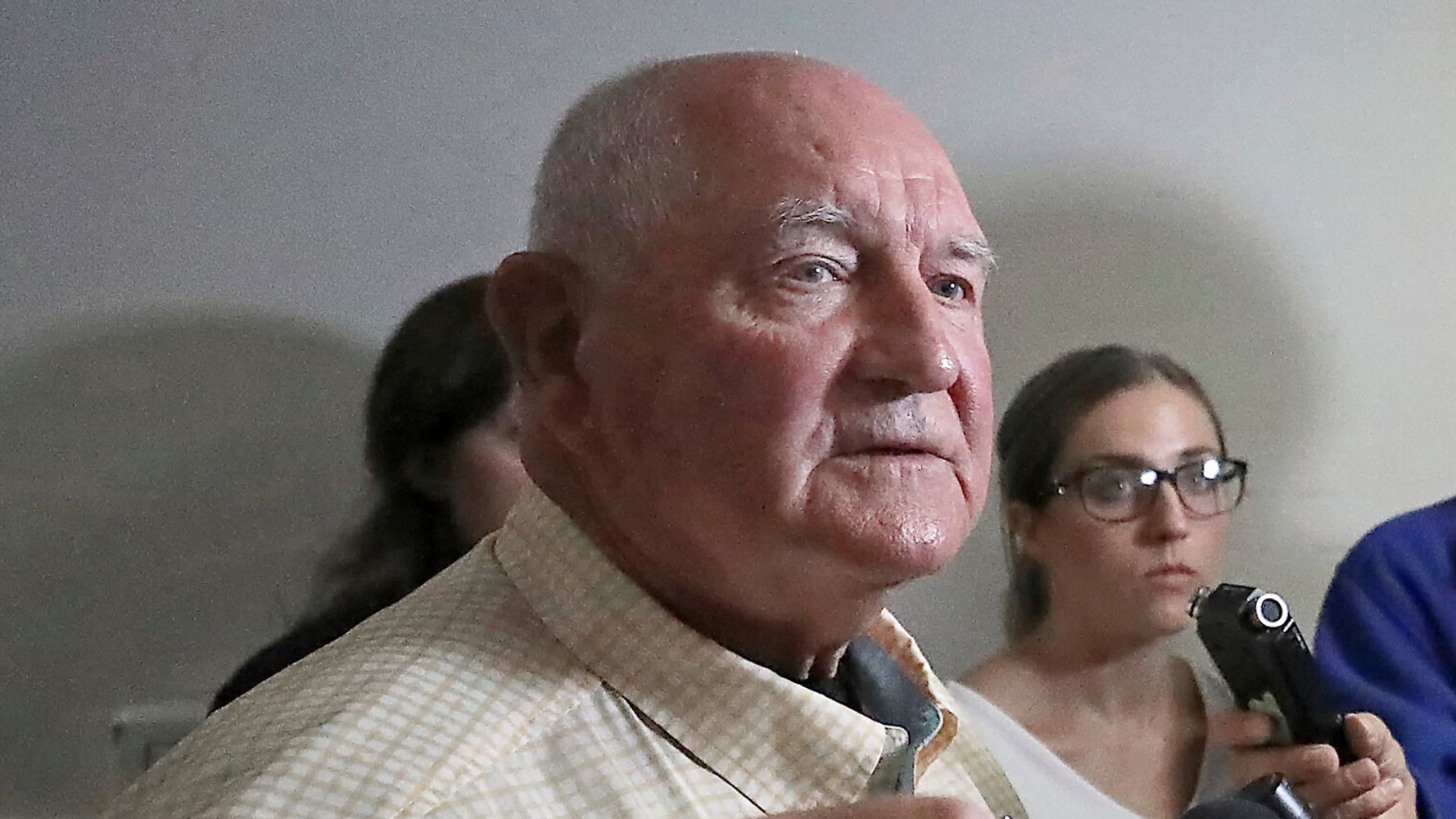 “Make no mistake about it, Trump’s administration is no friend to America’s dairyland,” tweeted Gov. Tony Evers.

Some farmers and ranchers demanded Perdue be fired and replaced with someone who supports smaller independent operations rather than big corporations in America’s heartland.

Perdue said Tuesday at the World Dairy Expo in Madison that he wasn’t holding out much hope for the survival of family dairy operations with fewer than 100 cows.

Farmers are bearing the brunt of Trump’s trade war, and dairy exports to China fell 54% in the first half of this year. Wisconsin, which boasts on its license plates that it’s “America’s dairyland,” has lost 551 dairy farms so far this year after losing 638 in 2018 and 465 in 2017, according to the state. Nearly 3,000 U.S. dairy farms folded in the nation last year — a decline of about 6.5%, according to U.S. figures.

“Now what we see, obviously, is economies of scale having happened in America — big get bigger and small go out,” Perdue said flatly. “I don’t think in America we, for any small business, have a guaranteed income or a guaranteed probability of survival.”

Evers complained to journalists Wednesday that Perdue “put the pox on small farming in the state,” The Milwaukee Journal reported.

“Are they struggling? Absolutely,” said Evers. “But I think at the end of the day we need to get behind them rather than saying, ’Ah maybe you should go larger.′ I, frankly, resent that the Department of Agriculture secretary from the federal government came in and kind of lambasted them.”

Make no mistake about it, Trump’s Administration is no friend to America’s Dairyland. We need to stand by our farmers and have their backs when times get tough. https://t.co/bl4WaFCB6l

Darin Von Ruden, president of the Wisconsin Farmers Union who runs a 50-cow organic farm, complained to reporters that larger farms are “not a good way to go,” The Associated Press reported.

“Do we want one corporation to own all the food in our country?” Von Ruden asked.

“We need to look at something that will benefit all of rural America, not just corporate rural America. Secretary Perdue is supposed to represent all U.S. farmers, but I don’t think we saw that here today.” https://t.co/8kQU0NpZSv

An organization of women in agriculture, Women Involved in Farm Economics,  demanded that Perdue be fired and replaced with someone who supports smaller farm and ranch operations, and not Big Ag corporations.

“With fewer and fewer places to sell our products and no support from our government to stop concentration in the agriculture market, farmers and ranchers are squeezed,” the group’s president, Diane McDonald, told Nebraska’s McCook Gazette.

Cattle ranchers at a rally in Omaha on Wednesday, coordinated by the Organization for Competitive Markets, also called for Perdue’s firing, accusing him of promoting corporate meatpackers at the expense of American independent cattle ranchers.

Today, cattle farmers and ranchers are holding a rally in Omaha, Nebraska to stand against meatpacker monopolies calling the @USDA to defend #FairCattleMarkets. They list 6 actions the administration can take right now to save the US cattle market: https://t.co/P3oDVzyF1e pic.twitter.com/i3hEfsUIxA

“There is nothing natural or inevitable about consolidation in agriculture,” Claire Kelloway, a researcher at Open Markets Institute, said in a statement. “Farmers are pushed to get big or get out because of policies that enable predatory monopolies to strip wealth from farmers.”

Perdue has the ability to “enact policies that would crack down on the abusive agriculture monopolies that are pushing out small producers and independent family farms,” Calloway added.

Trump declared in July during a visit to Wisconsin — much to the surprise of farmers the president calls “his patriots” — that “some of the farmers are doing really well.  We’re over the hump.”

Rural areas were crucial to Trump’s election in 2016.