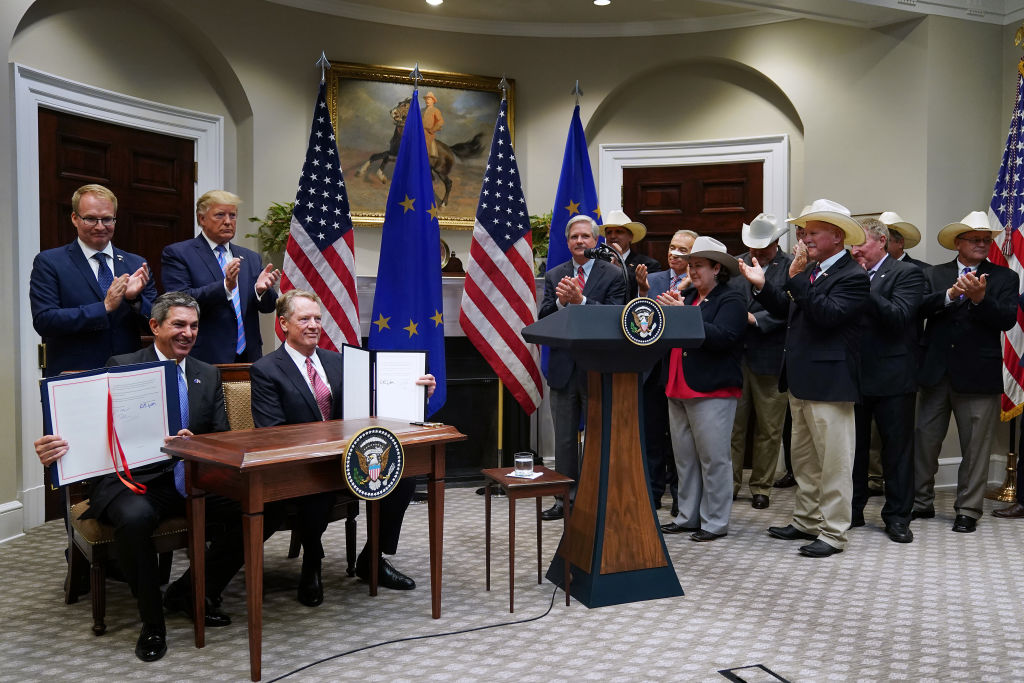 As part of the ongoing trade talks between Washington and Brussels, President Donald Trump announced on Aug. 2 that both sides struck a “breakthrough agreement” that would lower trade barriers in Europe and expand access for American beef ranchers. The duty-free beef exports to the bloc would rise from $150 million to $420 million a year, he added.

“This is a tremendous victory for American farmers, ranchers, and of course European consumers because American beef is considered the best in the world,” he said during the signing ceremony of the agreement at the White House.

The beef accord was signed by EU’s Ambassador to the United States Stavros Lambrinidis, Deputy Head of Mission for the Finnish Presidency of the Council of the EU Jani Raappana, and U.S. Trade Representative Robert Lighthizer. The agreement will lift gradually the amount of American hormone-free beef that can be sold in the European market.

The EU has an import quota for beef, which allows the bloc to import overall 45,000 tons every year. According to the new agreement, the U.S. exporters will eventually get the lion’s share—almost 80 percent or 35,000 metric tons—of the overall beef allowed to the EU.

The agreement will be phased-in over seven years, with an initial allocation of nearly 40 percent for American beef, according to the earlier announcement by EU officials.

Speaking at the signing ceremony, Raappana said “a very substantial amount of existing quota will be ring-fenced” for the United States.

“This provides a solution to our long-standing dispute in the WTO,” he added.

The beef accord is an important step in the trade negotiations between Washington and Brussels, according to Bart Oosterveld, director of the global business and economics program at the Atlantic Council, a Washington-based think tank.

“The agreement restores an old quota of U.S. exports of beef to the EU that had been talked about under the Obama Administration,” he said.

Under a compromise reached in 2009, the EU established an import quota for foreign beef, including that from the United States. U.S. farmers initially dominated the quota. However, other producers such as Argentina, Australia, and Uruguay gradually increased their exports to the bloc, pushing the U.S. share down to 30 percent.

This prompted the Obama administration to threaten the EU with customs penalties. The new agreement is now ending the long-running dispute with Brussels.

The bloc convinced other beef exporters Australia, Argentina, and Uruguay to cede a large share of the import quota, so that U.S. exporters can get more access to the EU market, according to a Bloomberg report.

The beef deal comes a year after the United States and the EU reached an agreement to eliminate tariffs on industrial goods.

In July last year, Trump and European Commission’s then-president Jean-Claude Juncker agreed to work together toward zero tariffs, zero non-tariff barriers, and zero subsidies on all industrial goods other than cars. There have been several rounds of trade talks between Lighthizer and outgoing EU Trade Commissioner Cecilia Malmström in recent months.

Secretary of Commerce Wilbur Ross told reporters in June that the talks with the EU were going very slowly, adding that reaching a trade deal would take a while.

A critical difference between the negotiating mandates of both sides is agriculture. The EU’s mandate considers removing tariffs and non-tariff barriers on industrial goods only, while Washington’s objective includes agricultural products.

Beef is classified on both sides of the Atlantic as an agricultural commodity and hence the beef deal needs to be approved by the European Parliament.

According to him, there are a lot of tensions in the Trans-Atlantic trade dialogue, including the threat of the car tariffs and the ongoing Boeing-Airbus disputes.

“But apparently those aren’t enough to hold progress on certain topics entirely. So that’s positive,” he said. “There appears to be robust dialogue and an ability to reach an [trade] agreement.”