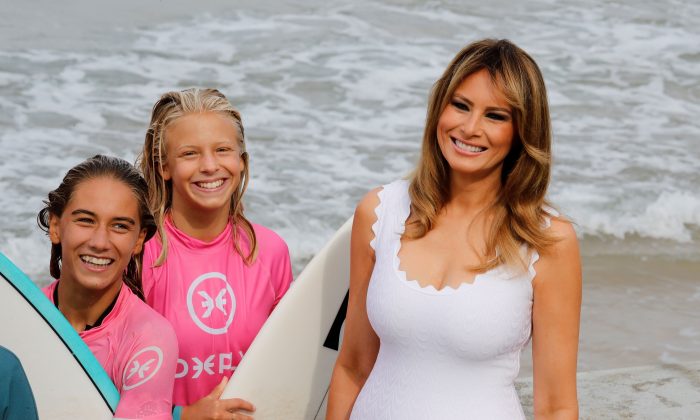 The spouses of G7 participants took a stroll at the beach on Monday, Aug. 26, to meet youth surfers at Biarritz, a sea resort town in the south west of France.

In true American style, U.S. First Lady Melania Trump exchanged high-fives with the youngsters, with the other women following suit.

Biarritz, situated in the French Basque country on the Atlantic coast, is popular with surfers and is usually packed with tourists in the summer.

France’s first lady Brigitte Macron and her counterparts including Melania Trump, joined by the first ladies of Australia, Chile and the EU Council, toured the streets of Espelette, a Basque village famous for its peppers, the Piment d’Espelette, on Aug. 25.

According to local newspaper La Depeche, they were shown a game of Basque Pelota, visited shops and tasted locally made sangria. The storekeeper asked each one to sign her glass.