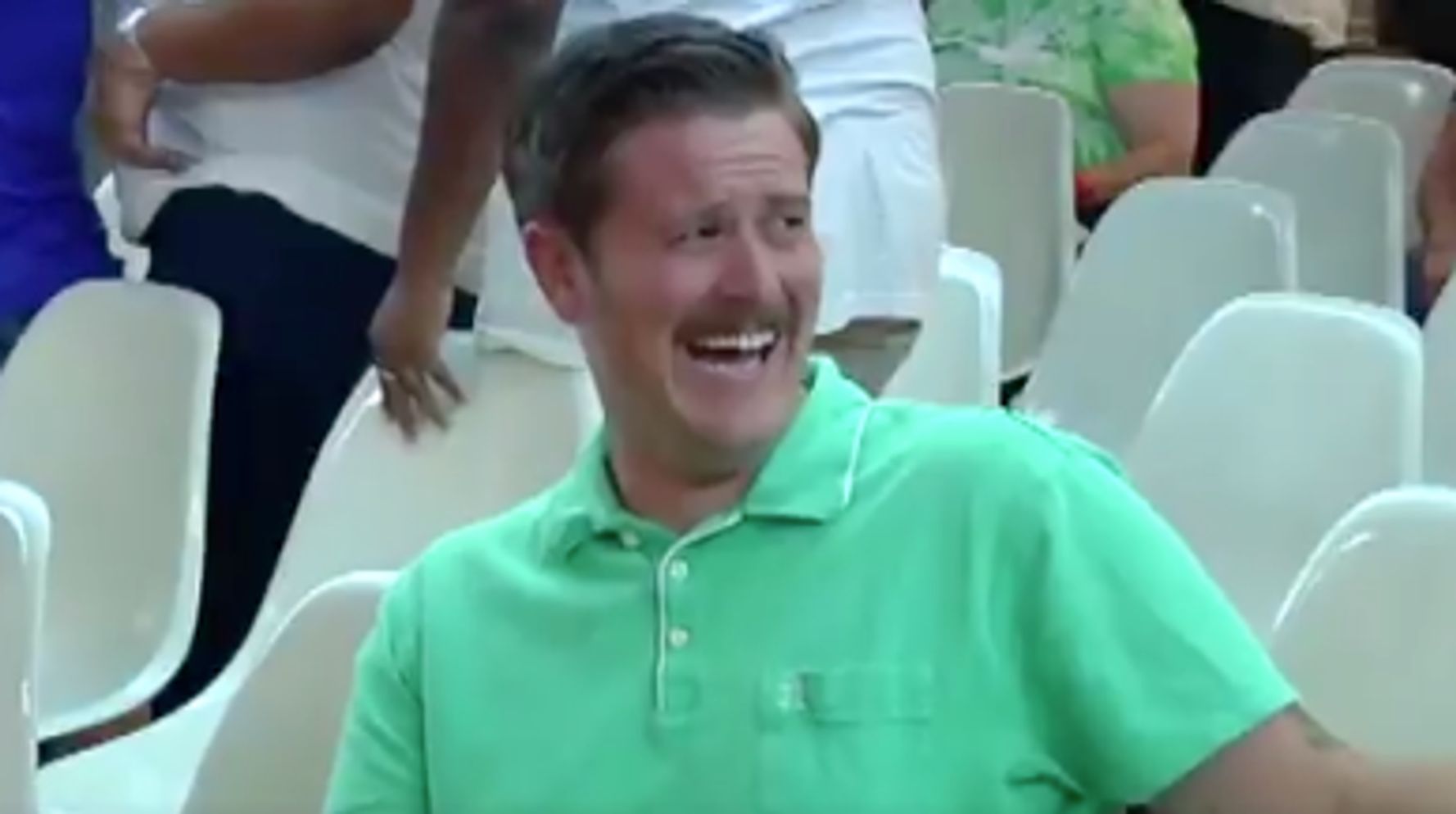 A guy in a green shirt has gone extremely viral after he was filmed cracking up at a pair of Donald Trump supporters who interrupted a Tucson City Council meeting to yell their anti-immigrant beliefs.

The protesters, one of whom was wearing a “Make America Great Again” cap, were kicking up a ruckus about the council’s successful vote to allow a “sanctuary city” initiative on the November ballot ― a voter-sponsored initiative that would add protections for the undocumented in Tucson.

Green Shirt Guy later identified himself on Twitter as Alex Kack after the video posted by Arizona journalist Nick VinZant climbed rapidly in views and shares.

Scene inside a Tucson City Council Meeting. Officials voted to put a “Sanctuary City” measure on the November ballot pic.twitter.com/mEh4PNj0Wo

In an interview with News 4 Tucson, Kack said he couldn’t see any other plausible reaction to the MAGA supporters besides laughter.

“People really took time out of their day to go interrupt a City Council meeting to just yell crazy, ignorant, racist, hate-filled stuff in the most absurd manner they could possibly do it,” he said in the interview. “Why wouldn’t you laugh at this?”

He said that in this “incredibly dark time” filled with so much “hateful rhetoric happening nationwide,” he wanted to focus the attention he was receiving toward the sanctuary city measure.

“Ultimately I think the majority of this country, regardless of their political affiliation, understand that the loudest voices happening right now are kind of ridiculous,” he said.

“And I think that laughter is resonating because I think that’s kind of how people feel right now.”

Racking up close to 5 million views in 21 hours, Green Shirt Guy quickly soared to viral stardom, which he chose to use as a platform to promote the Sanctuary Initiative.

In all seriousness they were there to protest Tucson’s citizen lead Sanctuary Intiative which is under attack by the local GOP, you can help at: https://t.co/iOCDLN5mGd. #defendsanctuary #GreenShirtGuy

People were also pretty impressed with the rest of the audience, which included an old man with a banjo (now dubbed Banjo Man), two older women who sang a song about sanctuary cities, a majority of attendees who booed and shouted “Shut up!” and a guy who told the protesters they were “in direct violation of being a jackass.”

Here’s Banjo Man in all his glory:

For people asking about the guy with the banjo. Here he is. #GreenShirtGuy pic.twitter.com/G2gUCiNumm

The Sanctuary Initiative would implement measures to protect immigrants, including preventing Tucson police from asking about immigration status, The Associated Press reported.

The council vote came at a particularly fraught juncture for immigration discourse, just days after the mass shooting in El Paso, Texas, shined a spotlight on the problematic rhetoric around Latino migrants.

People celebrated the universe’s delivery of Green Shirt Guy at a time when the country needed him most.

Here are some of the best reactions to his Twitter debut.

Green Shirt Gary is all of us right now pic.twitter.com/2u5MELf2yj

Don’t get me wrong, I love #GreenShirtGuy as much as anyone…but I REALLY need to know the story behind #BanjoDude pic.twitter.com/fTCRv2BIN2

Not all heroes wear capes.

Green shirt guy is the how the world views Trump supporters, lol. More importantly, what did the old man w/the banjo in background have to say? #GreenShirtGuy pic.twitter.com/DG1Pef29Hb

If there was ever a video to describe international reactions to America – #GreenShirtGuy is Canada https://t.co/Xm0NGA2J0K

Looks like @Alex_Kack is now trending worldwide for being awesome in the face of awfulness, and it so very well deserved. ❤️#GreenShirtGuy https://t.co/or6vlpGz71

Imagine hating immigrants so much that you put on your tightest shorts, most unflattering top, your bigot hat, engulf yourself in sharpie fumes as you write your hate on poster board only to have some guy laugh his ass of at you.