Democratic presidential candidate Kamala Harris has announced she will skip a planned appearance at South Carolina’s Benedict College after the school honored President Donald Trump for his criminal justice efforts.

Trump on Friday delivered the keynote address at the Second Step Presidential Justice Forum, hosted at the historically Black college. During the forum, he also received the Bipartisan Justice Award for his efforts to pass the First Step Act on federal prison reform.

Harris was scheduled to attend the second day of the forum but said Friday she had canceled. The senator from California pointed to Trump’s inclusion at the forum as well as the fact that the White House invited just 10 students from Benedict College to attend his keynote speech.

“As the only candidate who attended an HBCU, I know the importance that these spaces hold for young Black Americans,” Harris said in a statement.

“Today, when it became clear Donald Trump would receive an award after decades of celebrating mass incarceration, pushing the death penalty for innocent Black Americans, rolling back police accountability measures and racist behavior that puts people’s lives at risk, and then learned all but ten Benedict students are excluded from participating, I cannot in good faith be complicit in papering over his record.”

Benedict College President Roslyn Clark Artis responded to the backlash in an interview with HBCU Digest on Thursday. She noted that Benedict College did not personally extend the invitation to Trump to attend the forum, which was organized by the 20/20 Bipartisan Justice Center. That organization, of which Artis is a part, is comprised of a bipartisan group of Black leaders across the country.

“I think people’s emotional reactions to Donald Trump and the misunderstanding of how this came to be ― the idea that we extended a personal invitation to Donald Trump to come to an HBCU campus ― have caused people to be a little irrational,” Artis said.

“All Republicans must remember what they are witnessing here – a lynching. But we will WIN!” the president tweeted on Tuesday.

The term is associated with a form of white terrorism used in the Jim Crow era that was responsible for the death of thousands of Black Americans, according to the NAACP.

Many Democratic 2020 candidates, including Harris, spoke out against the president’s use of the word to describe the congressional investigation.

“Lynching is a reprehensible stain on this nation’s history, as is this President,” Harris tweeted. “We’ll never erase the pain and trauma of lynching, and to invoke that torture to whitewash your own corruption is disgraceful.”

The senator said Friday she would meet with students and community members on Saturday to discuss criminal justice reform instead of attending the forum at Benedict College. 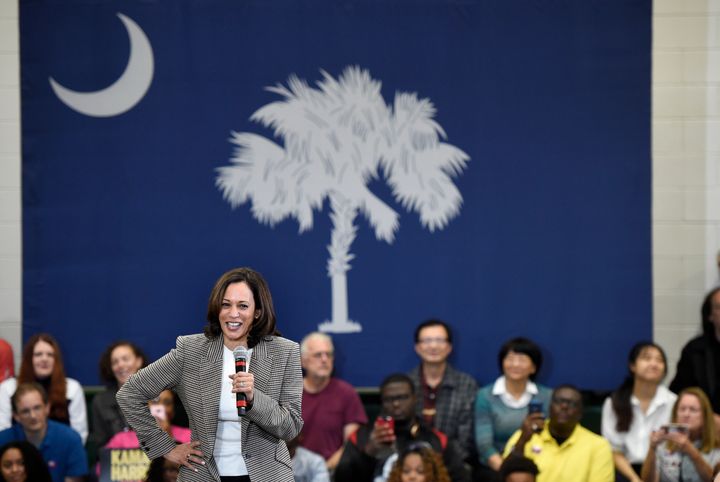 During her presidential campaign, Harris’s own record on criminal justice has come under scrutiny. In her nearly three decades as a prosecutor, Harris enforced laws in California that have disproportionately targeted Black men.

The issue came up during the Democratic primary debate in September.

“You used to oppose the legalization of marijuana; now you don’t. You used to oppose outside investigations of police shootings; now you don’t,” ABC News correspondent Linsey Davis said of the former state attorney general. “You’ve said that you changed on these and other things because ‘you were swimming against the current and, thankfully, the currents have changed.’ But when you had the power, why didn’t you try to effect change then?”

The senator responded by saying there have been “many distortions” of her record and then spoke of her achievements.

Harris conceded that she could have done more in her capacity as attorney general but then pointed to her criminal justice plan, which includes proposals to end mass incarceration, end solitary confinement and shut down for-profit prisons on her first day in the White House.

“As president of the United States, knowing the system from the inside, I will have the ability to be an effective leader and get this job complete,” she said.