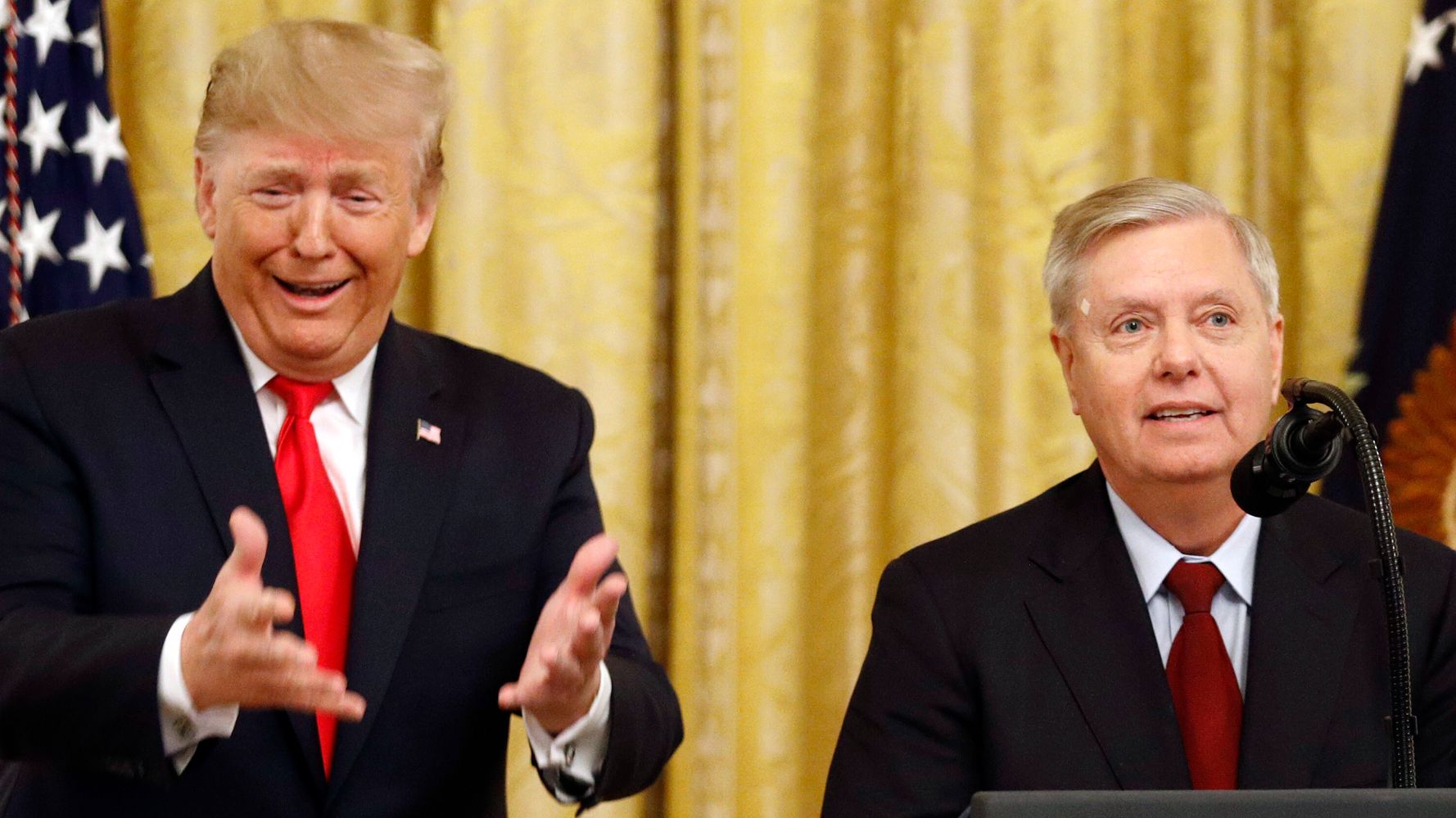 DES MOINES, Iowa ― President Donald Trump’s top attack dog in the Senate delivered a prediction about his impeachment and his 2020 Democratic opponents to Iowa Republicans on Friday night: “I think Donald Trump is going to kick their ass.”

“I think impeachment is going to blow up in their face,” South Carolina’s Lindsey Graham said to whoops and cheers from the crowd of about 600 Iowa Republicans at the state party’s annual Lincoln-Reagan fundraising dinner. “This effort by the House is a partisan revenge, sour grapes, sore loser effort by people who can’t accept the fact they lost.”

Graham did not address the details of the issue but instead joked: “Trump told me, ‘I didn’t do no quid pro quo. I don’t even speak Latin.’”

He did, though, acknowledge that Trump could “be a handful” and quipped that he gets along well with Trump because they share a mutual interest. “We found something in common. I like him, and he likes him. Which gives us a lot to talk about,” Graham said.

Graham, a three-term senator from South Carolina who chairs the Senate Judiciary Committee, has become one of Trump’s most vocal defenders on impeachment.

When a rough transcript of a July 25 phone call was released showing Trump stating “I would like you to do us a favor” after the Ukrainian president mentioned military aid, it caused dozens of Democratic House members and millions of Americans generally to switch from opposing impeachment to supporting it.

But Graham, a former Air Force lawyer, said he saw nothing inappropriate in Trump’s request for a foreign country’s investigation into the Democrat he most feared, former Vice President Joe Biden. More recently, Graham said he has no interest in reading the transcripts of the various administration officials whose under-oath testimony has corroborated a whistleblower’s claim that Trump was coercing Ukraine to announce and conduct the investigations, using U.S. military aid as leverage. “I think this is a bunch of B.S.,” Graham said.

His audience Friday night, who each paid a minimum $100 for a ticket that included a meal at the downtown Marriott hotel, did not appear to need convincing.

“I think it’s a waste of everybody’s time,” said Floyd Hammer, a 78-year-old businessman and corn farm owner from Union, north of Des Moines. He said he read the rough transcript when it was released in late September and did not think that Trump had done anything wrong. “I saw absolutely nothing.”

Kristine Bartley, who is 70 and an oral history consultant in Des Moines, said there was no point in impeaching Trump with an election coming up in less than a year. “I think it’s horrible to put the country through this. Unless the president is running around with a gun shooting people, just let it go. There’s an election coming up.”

Iowa is among the states that voted for former President Barack Obama twice, in both 2008 and 2012, before flipping to Trump in 2016. The 2018 midterms, though, showed a backlash to Trump, with two Republican members of Congress losing their seats to Democratic women.

Currently, Trump is under water in polling in Iowa, with 42% approving of his job performance and 54% disapproving, compared with a 49-40 spread in his favor in January 2017.