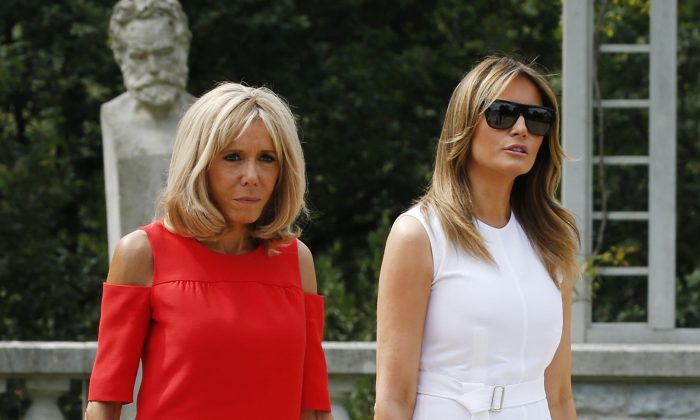 French President’s wife Brigitte Macron and U.S. First Lady Melania Trump (R) arrive to attend a traditional dance performance with the other G7 leaders’ spouses at the Villa Arnaga in Cambo-les-Bains during a visit on traditional Basque culture, near Biarritz as part of the G7 summit, on Aug. 25, 2019. (Regis Duvignau/AFP/Getty Images)

While their partners were trying to forge unity over prickly global issues, the spouses of the leaders of G7 countries visited a small village in the French Basque country on Sunday, Aug. 25.

France’s first lady Brigitte Macron and her counterparts including Melania Trump, joined by the first ladies of Australia, Chile and the EU Council, toured the streets of Espelette, a Basque village famous for its peppers, the Piment d’Espelette.

According to local newspaper La Depeche, they were shown a game of Basque Pelota, visited shops and tasted locally made sangria. The storekeeper asked each one to sign her glass.