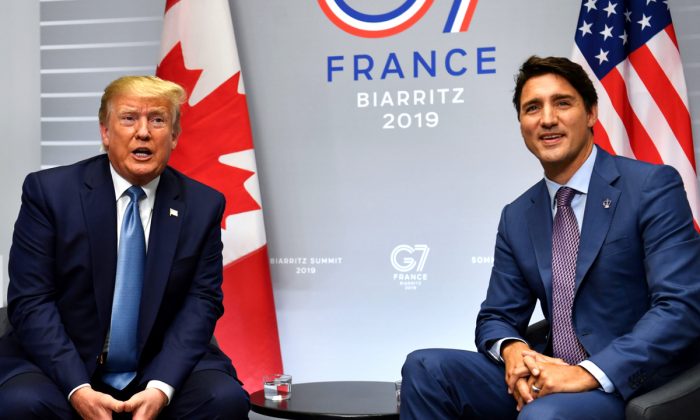 President Donald Trump (L) and Canada’s Prime Minister Justin Trudeau pose as they take part in a bilateral meeting at the Bellevue centre in Biarritz, south-west France on the second day of the annual G7 Summit attended by the leaders of the world’s seven richest democracies, Britain, Canada, France, Germany, Italy, Japan and the United States on Aug. 25, 2019. (Nicholas Kamm/AFP/Getty Images)

President Donald Trump on Aug. 25 said he hoped a new U.S. trade deal with Canada and Mexico would be put to a vote in the U.S. Congress soon.

Canadian Prime Minister Justin Trudeau, meeting with Trump on the sidelines of a G7 summit in France, said the deal was a good one for workers.

Trudeau added that he and Trump had “some good conversations” on the global economy and that the Canadian and American economies “are doing well.”

In November 2018, the leaders of the United States, Canada, and Mexico signed the USMCA, which would replace the 25-year-old North American Free Trade Agreement (NAFTA).