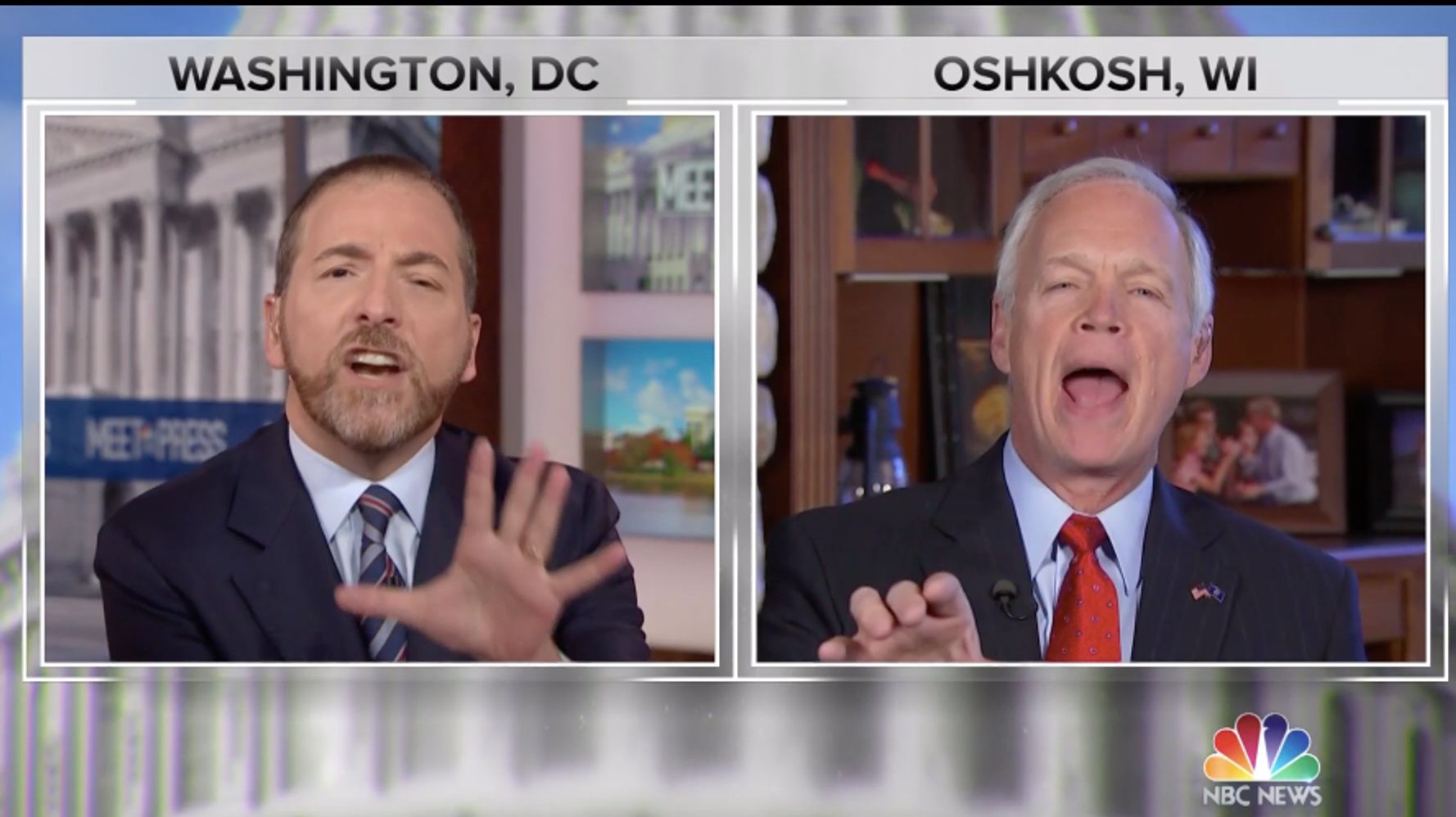 NBC’s Chuck Todd interviewed Sen. Ron Johnson (R-Wisc.) about President Donald Trump’s dealings with Ukraine, the center of an impeachment inquiry into the president, and things quickly got heated.

During Sunday’s episode of “Meet The Press,” Todd asked Johnson why he said he “winced” when a U.S. ambassador told him that aid to Ukraine was contingent on an investigation into former Vice President Joe Biden, who is a frontrunner in the race for the Democratic presidential nomination.

But Johnson, a member of the Senate foreign relations committee, dodged the question and instead pushed a conspiracy theory about the origins of Robert Mueller’s Russia investigation.

“What does this have to do with Ukraine?” Todd interrupted. “I have no idea why a Fox News conspiracy propaganda stuff is popping up on here.”

WATCH: @SenRonJohnson is asked why he winced & brings up a “conspiracy theory.”@chucktodd: “I have no idea why we’re going here. … Can we please answer the question I asked you instead of trying to make Donald Trump feel better here that you’re not criticizing him?” #MTP pic.twitter.com/41i7WPHQlF

Johnson responded by defending Trump and his supporters for being “upset” with the media.

“This is not about the media,” Todd cut in, growing visibly frustrated. “Senator Johnson, please. Can we please answer the question that I asked you instead of trying to make Donald Trump feel better here that you’re not criticizing him? I’m just trying to ask a simple question.”

Johnson then acknowledged that he was upset to hear military aid was being withheld until Ukraine committed to investigate Biden.

“I didn’t want those connected,” he said. “But here’s the salient point of why I came forward: When I asked the president about that, he completely denied it. … He said, ‘I’d never do that.’ So that is the piece of the puzzle that I am here to report today.”

He added that he’s not trying to “defend” or “denounce” Trump, but that he simply wants the truth.

“We’re only dealing with the facts that we have, not the facts that you wish them to be,” Todd said. “You’re making a choice not to believe the investigations that have taken place.”

Johnson was part of the envoy, along with Energy Secretary Rick Perry, that traveled to Ukraine in May for the inauguration of the country’s new president, Volodymyr Zelensky. After the visit, Johnson told The Wall Street Journal that he told Trump that he was confident in Zelensky as a leader.

Trump later pressed Zelensky during a July phone call to look into Biden. A U.S. intelligence official filed a whistleblower complaint in August regarding the call and alleging the White House tried to cover it up.

Trump claims Biden, as vice president, demanded the notoriously corrupt prosecutor general in Ukraine be fired for the purpose of impeding an investigation into a Ukrainian gas company where his son, Hunter, served on the board. No evidence has been brought to light to suggest this and Ukrainian authorities have cleared Biden of any wrongdoing.

During a subsequent interview with Todd on Sunday, Sen. Chris Murphy (D-Conn.) said he’s “deeply scared” by Republicans’ defense of Trump in the wake of the whistleblower complaint.

“That interview was just a giant green light to the president of the United States to continue to solicit foreign interference in presidential elections,” Murphy said of Johnson’s exchange with Todd. “This entire country should be scared that at a moment when we need patriots, what we are getting is blind partisan loyalty.”

Republican On House Intelligence Committee: ‘Why Should I Care’ About 2nd Whistleblower?