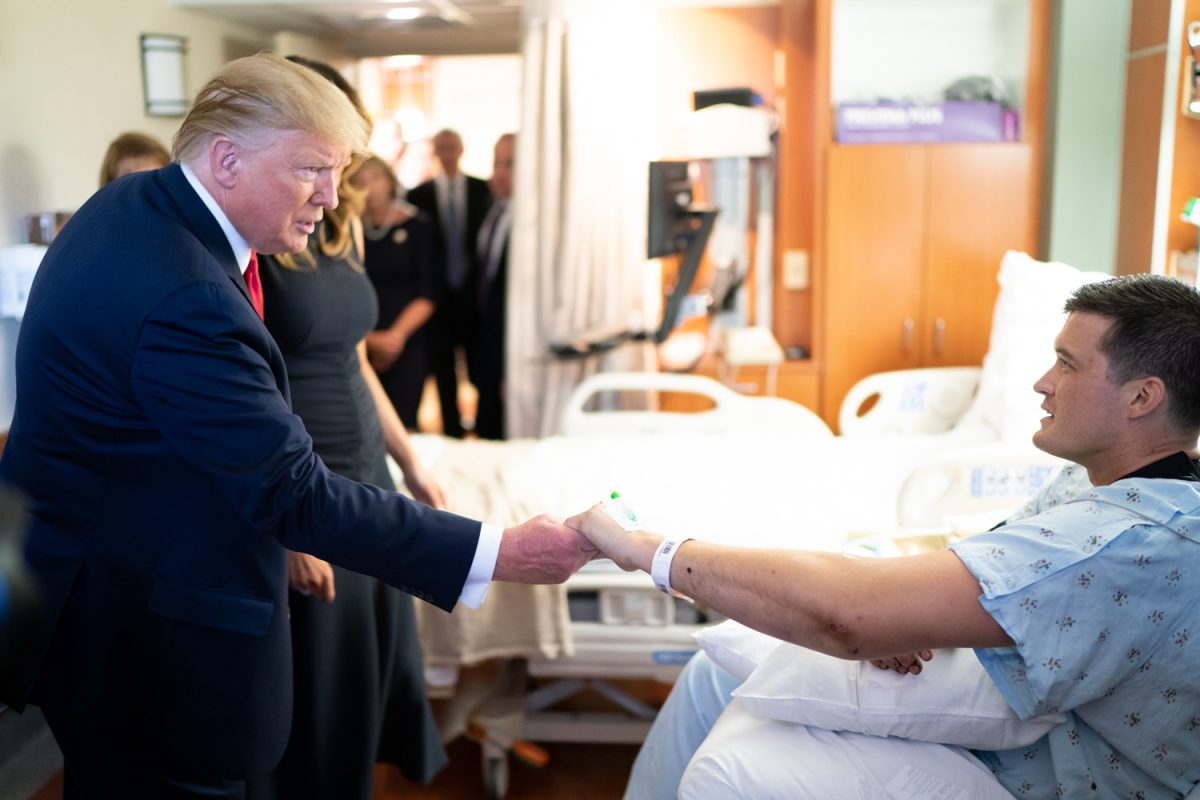 President Donald Trump and First Lady Melania Trump visited Dayton, Ohio, and El Paso, Texas, on Aug. 7 to meet with the victims of the two mass shootings that days earlier had claimed the lives of 32 people and thank first responders for their efforts.

The president and first lady visited hospitals in both cities and met with victims and families, medical staff, and law enforcement officers. The press was barred from both events, because the trip was about meeting with victims and wasn’t meant to be a photo-op, according to White House press secretary Stephanie Grisham.

In Dayton, Trump visited the Miami Valley Hospital, which is a five-minute drive from the Ned Peppers bar, where a gunman killed 10 people and injured 27 on Aug. 4.

The Trumps walked from room to room at the hospital, speaking with victims, families of survivors, first responders, and hospital staff.

“You had God watching. I want you to know we’re with you all the way,” the president told one group.

Photos and videos distributed by the White House show the president holding hands with victims, speaking with hospital executives, and posing for photos with uniformed law enforcement officers.

“They’ve been stopping between rooms to thank the hardworking medical staff. Very powerful moments for all!” Grisham wrote on Twitter.

Sen. Rob Portman (R-Ohio), who joined the president for the hospital visit, told reporters that Trump was “well-received.” People who had injuries but were no longer hospitalized were also in attendance, because Trump had asked to see all the victims.

“It was emotional, of course, but it was also inspiring in the sense that again they’re doing better, and the attitude of the three individuals who were the most seriously wounded who are still there was positive,” Portman said. “They were all very optimistic about their recovery and that was heartening to see.”

Portman said President Trump also spent time with the officers who responded to the shooting.

“We talked about their training and he commended them for their remarkable response,” Portman said. “It was a terrible night, but it could have been so much worse had they not responded quickly.”

Miami Valley Hospital received 16 victims of the shooting, of whom five were admitted, one in critical condition.

The president landed in Ohio shortly before 11 a.m. A small welcoming party, including Ohio Gov. Mike DeWine and Dayton Mayor Nan Whaley, shook hands and exchanged words with the first couple on the tarmac at Wright-Patterson Air Force Base. Rep. Mike Turner (R-Ohio) was also part of the greeting party. Turner’s daughter, Jessica, joined him. She was in Dayton when the shooting happened.

After visiting Dayton, Trump flew to El Paso, where a gunman took the lives of 22 people, just 13 hours before the shooting in Dayton.

The group traveled via motorcade to the University Medical Center of El Paso, which received 13 of the victims of the shooting at a local Walmart. At the hospital, the president met with victims, families, hospital staff, and police officers.

Prior to his departure, Trump told reporters at the White House “we’re going to take the opportunity to really congratulate the first responders.”

“It’s a terrific opportunity really to congratulate some of the police and law enforcement,” Trump said. “The job they’ve done was incredible. Really incredible.”

On Aug. 4, Trump harshly condemned both massacres, proposed measures to prevent future attacks, and urged Americans to unite against the ideologies espoused by the killers. The Dayton killer reportedly was a follower of socialism, Satanism, and the extremist group Antifa.

The president told reporters at the White House prior to his departure that there is interest in Congress for legislation related to background checks for gun purchases. Responding to a question about banning assault weapons, he noted that the “political appetite” for such legislation is lacking. Trump signaled that he may bring Congress back from recess to vote on a bill, if there is enough support for the measure.

Within hours of the shootings, Democrats and establishment media personalities claimed, without evidence, that Trump’s rhetoric caused the killers to carry out the massacres.

“We need strong immigration laws. But we want to allow millions of people to come in because we need them. We have companies coming in from Japan, all over Europe, all over Asia. They’re opening up companies here. They need people to work. We have a very low unemployment rate,” he added. “I think we need legal immigration, not illegal immigration.”

“My critics are political people. They’re trying to make points,” Trump said. “In many cases, they’re running for president and they’re very low in the polls.”

“So these are people that are looking for political gain. I don’t think they’re getting it. And, as much as possible, I’ve tried to stay out of that,” he added.

Asked if he is concerned about the rise of hate groups, Trump concurred and noted that he plans to take action.