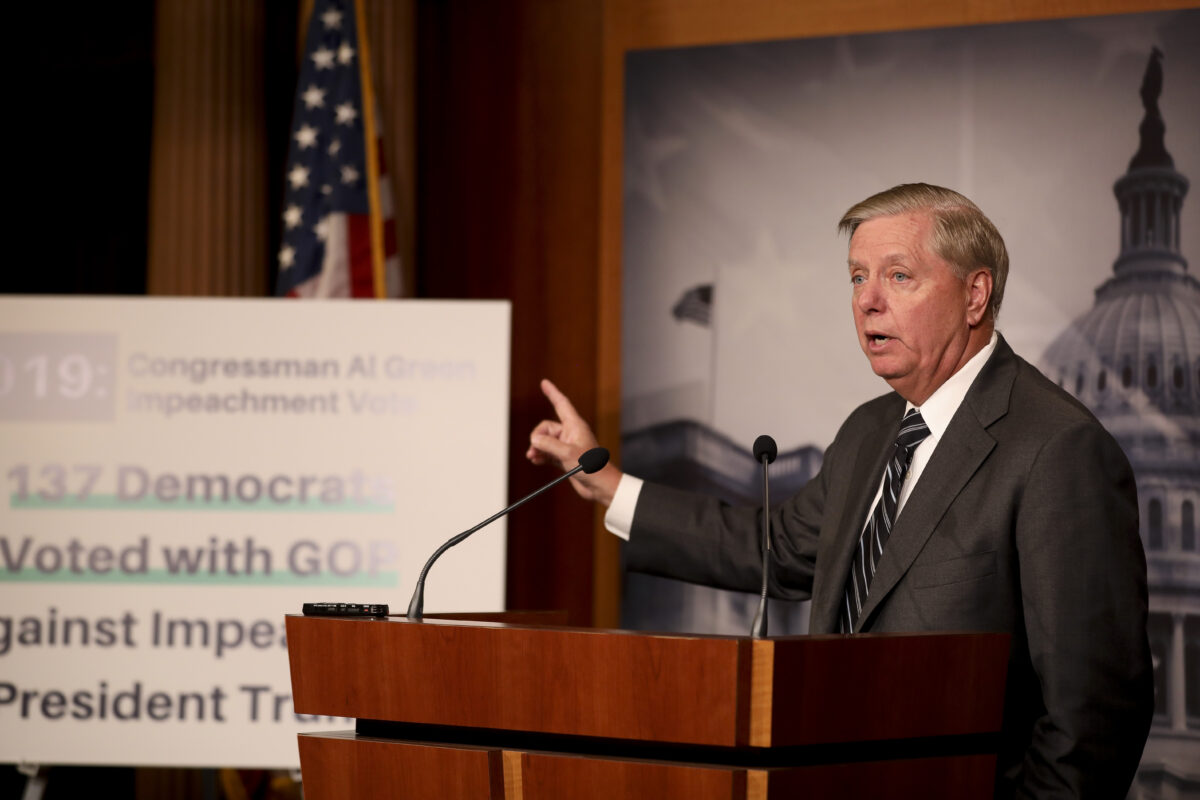 Sen. Lindsey Graham (R-S.C.) introduced a non-binding resolution on Oct. 24 calling on House Democrats to hold a formal vote on initiating an impeachment inquiry before moving any further in the investigation of President Donald Trump.

Thirty-five Republican senators co-sponsored the resolution, which also demands that the impeachment inquiry accommodate Trump with constitutional due-process protections. By early evening on Oct. 24, the number of co-sponsors had reached 46.

“The House of Representatives is abandoning more than a century’s worth of precedent and tradition in impeachment proceedings and denying President Trump basic fairness and due process accorded every American,” the resolution (pdf) states.

“One of the cornerstones of the American Constitution is due process: the right to confront your accuser, call witnesses on your behalf, and challenge the accusations against you.”

Senate Republicans unveiled the resolution one day after roughly three dozen House Republicans stormed a hearing room during a House Intelligence Committee impeachment deposition to demand that the closed-door hearings be opened to lawmakers and the public.

The resolution points out that during the three prior impeachment proceedings, the House held a formal vote to initiate an impeachment inquiry. In Trump’s case, the process was replaced by a press conference by House Speaker Nancy Pelosi (D-Calif.), the Republicans charge.

“The proposition that the Speaker acting alone may direct committees to initiate impeachment proceedings without any debate or a vote on the House floor is unprecedented and undemocratic,” the resolution states.

Prior impeachment proceedings allowed the presidents to have counsel present at hearings and depositions, according to the resolution. In each case, the presidents’ lawyers were allowed to introduce and object to evidence and call on and cross-examine witnesses.

“By contrast, the House’s current impeachment ‘inquiry’ provides none of these basic rights and protections to President Trump,” the co-sponsors say. “The main allegations against President Trump are based on assertions and testimony from witnesses whom he is unable to confront, as part of a process in which he is not able to offer witnesses in his defense or have a basic understanding of the allegations lodged against him.”

The Democrats have conducted all of the hearings to date behind closed doors. The public’s access to the information has so far been limited to leaks to the media and a handful of documents published by the committees.

The Democrats have defended the process, claiming that lawmakers in prior impeachment proceedings worked from material collected through an investigation by a special counsel. Meanwhile, the lawmakers took up the current case without letting a special counsel conduct an inquiry. As a result, the process requires secrecy so that witnesses don’t adjust their testimony.

The constant leaks from the inquiry have undermined the advantages gained through secret proceedings. Republicans say they don’t have access to transcripts of the depositions. Meanwhile, leaked information seems to consist almost entirely of sections of testimony damaging to Trump.

The White House has refused to cooperate with the impeachment inquiry unless the Democrats hold a vote to formally launch the inquiry. The president has denied any wrongdoing in his call with Zelensky. The Ukrainian leader said he wasn’t pressured during the phone call.

Trump on Oct. 23 criticized the impeachment inquiry along lines similar to the Senate resolution.

“Do Nothing Democrats allow Republicans Zero Representation, Zero due process, and Zero Transparency,” the president wrote on Twitter. “Does anybody think this is fair?”

The Democrats allege that in order to pressure Zelensky, Trump placed a temporary hold on military aid to Ukraine. All of the witnesses who have testified to date say that Ukrainian officials were unaware of the hold until one month after the Trump–Zelensky phone call.