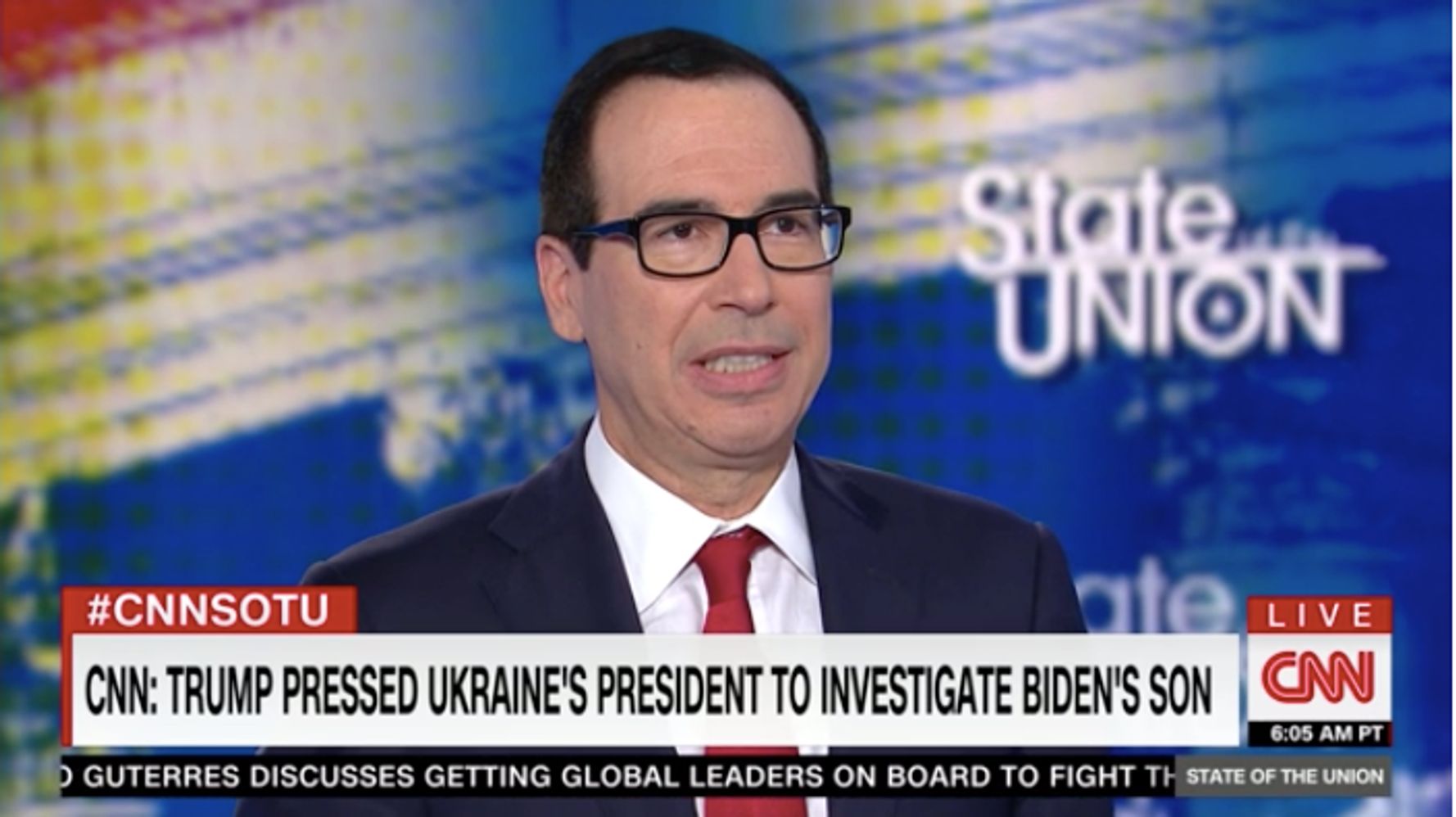 But Democrats and some legal experts say granting Congress access to the complaint is required by law.

Mnuchin, during an appearance on CNN’s “State of the Union” Sunday, defended Trump against reports that he repeatedly pressured Zelensky during a July phone call to investigate former Vice President Joe Biden and his son Hunter.

The House Intelligence Committee has opened an investigation into the complaint, including whether Trump withheld military aid from Ukraine as part of his efforts to get Zelensky to investigate Biden, a front-runner in the 2020 Democratic presidential primary.

Michael Atkinson, the inspector general for the U.S. intelligence community, deemed the complaint credible and of “urgent concern,” he wrote in a letter earlier this month to House Intelligence Committee Chairman Adam Schiff (D-Calif.).

But acting Director of National Intelligence Joseph Maguire, whom Trump appointed last month, reportedly said he does not believe the complaint meets the definition of “urgent concern” and has refused to hand it over to Congress.

Mnuchin responded, “I think that would be a terrible precedent.”

“Conversations between world leaders are meant to be confidential,” he continued. “And if every time someone for political reasons raised a question and all of a sudden those conversations were disclosed publicly ― and when you disclose them to Congress, lots of times they leak into the press ― then why would world leaders want to have conversations together?”

There is no evidence to suggest the U.S intelligence official, who has not been publicly identified, filed the complaint due to political motivations.

Biden has called on Trump to release a transcript of his phone call with Zelensky. Trump, who has denied any wrongdoing, told reporters Sunday that his conversation with the Ukrainian president was “perfect” but he would consider releasing a transcript of the call.

Whether Congress has the legal authority to see the complaint after Maguire refused to hand it over has been the subject of debate among some intelligence officials and legal experts.

Though there are laws in place to protect whistleblowers who come forward, it’s unprecedented for the top national intelligence official to stop Congress from viewing a whistleblower complaint that the inspector general deems of “urgent concern,” reported The Washington Post.

Maguire’s legal team argues that the complaint did not meet the legal standard of “urgent concern” and he is therefore not required to submit it to Congress. Atkinson disagrees and has said he worries Maguire’s actions will deter future whistleblowers from coming forward.

Democrats say the allegations against Trump, if true, amount to a U.S. president seeking assistance from a foreign government to help his reelection campaign. Though some Republicans, including Sen. Pat Toomey (Pa.), have said such a scenario would be highly inappropriate, other members of the GOP have defended Trump’s actions.

“Is it the position of the administration that it is acceptable for politicians to pressure foreign leaders to look into and investigate their political rivals?” Tapper asked Mnuchin on Sunday.

Mnuchin said he wasn’t on the call in question but said he has “no reason to believe” Trump pressured Zelensky.

But Tapper continued to press Mnuchin, asking him whether he would have found it “inappropriate” if former President Barack Obama pressured a foreign leader to investigate Trump’s eldest sons, Don Jr. and Eric, and their international business dealings.

“I’m not going to speculate on that,” Mnuchin said. “What I do find inappropriate is the fact that Vice President Biden at the time’s son [sic] did very significant business deals in Ukraine. I for one find that to be concerning.”

Trump has claimed Biden called on a notoriously corrupt prosecutor in Ukraine to be removed from office to impede an investigation into a Ukrainian gas company, of which Hunter had been a member of the board. Ukrainian authorities have said they haven’t found any wrongdoing by Biden.

“I don’t understand,” Tapper continued to grill Mnuchin. “So it’s OK for Donald Trump Jr. and Eric Trump to do business all over the world, it’s OK for Ivanka Trump to have copyrights approved all over the world while President Trump is president, but while Vice President Biden was vice president, his son shouldn’t have been able to do business dealings?”

“Again, I don’t really want to go into more of these details,” Mnuchin responded, before Tapper interrupted him, stating that his comments were “setting a precedent that the president is violating.”

The Trump Organization, headed by the president’s eldest sons, has come under fire over its deals with foreign investors, which some government watchdog groups say violate the emoluments clause, a section of the Constitution that prohibits gifts to government officials.