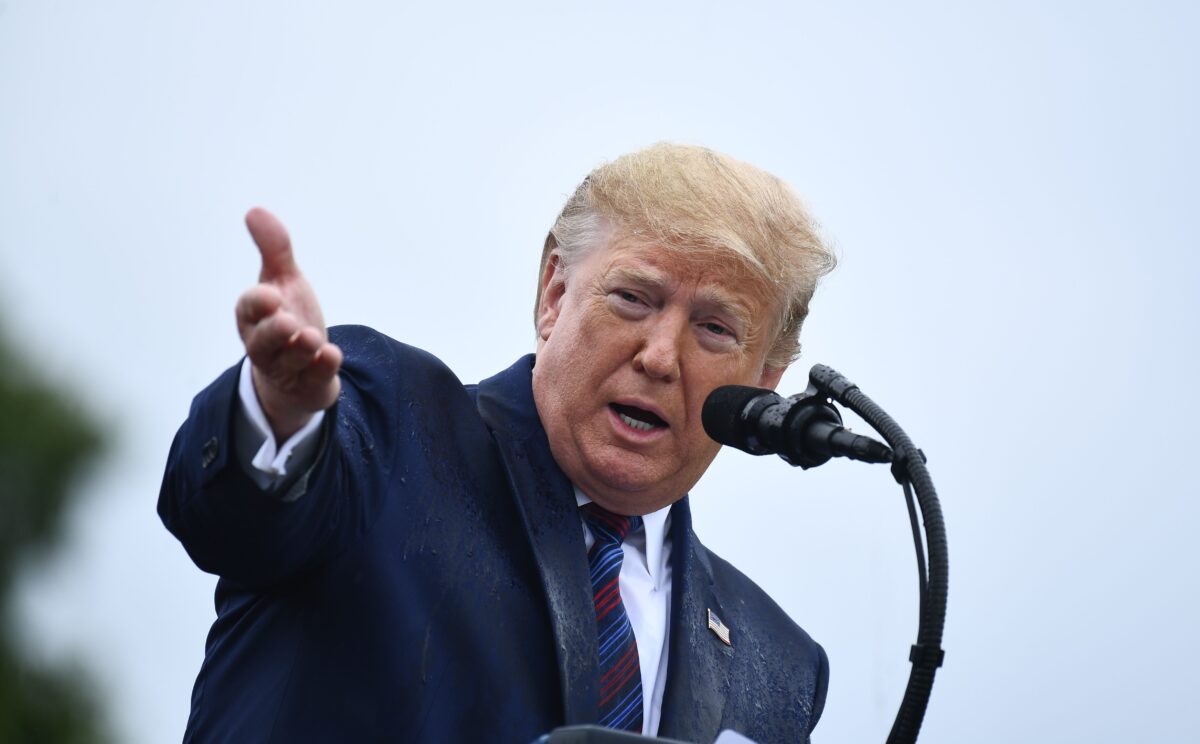 President Donald Trump on Sept. 30 demanded to know which officials changed the rules on a whistleblower form for complaints submitted to the Office of the Inspector General of the Intelligence Community.

Sometime between May 17, 2018, and Sept. 24, 2019, the office removed language from the Urgent Concern Disclosure Form that notified complainants that their reports wouldn’t be transmitted pursuant to the Intelligence Community Whistleblower Protection Act (ICWPA) unless they had first-hand knowledge of alleged wrongdoing.

The removal of the language is significant because on Aug. 12, less than three weeks before the form was modified, the Intelligence Community inspector general (ICIG) received a whistleblower complaint based entirely on second-hand knowledge about a call between Trump and Ukrainian President Volodymyr Zelensky and related events. Democrats relied on the complaint, before it was made public, to launch an impeachment inquiry.

“Who changed the long standing whistleblower rules just before submittal of the fake whistleblower report? Drain the swamp!” Trump wrote on Twitter on Sept. 30.

In the Twitter post, Trump didn’t refer to the whistleblower form and instead referenced “whistleblower rules.” It’s unclear if the president is aware of a change to ICIG rules prior to the filing of the complaint on Aug. 12. The White House didn’t respond to a request for clarification.

The form currently posted on the ICIG website states that it was revised in August, although the internal file properties say the form was created on Sept. 24.

A version of the Urgent Concern Disclosure Form, which was created on May 17, 2018, states that “in order to find an urgent concern ‘credible,’ the ICIG must be in possession of reliable, first-hand information.”

“The ICIG cannot transmit information via the ICWPA based on an employee’s second-hand knowledge of wrongdoing,” the form, which The Epoch Times obtained from a CIA whistleblower, states.

The form currently posted on the ICIG website no longer features the language requiring first-hand knowledge.

“There has never been any requirement that whistleblowers were required to possess first-hand knowledge to file complaint. No law anywhere states that,” Mark Zaid, the attorney for the anonymous whistleblower, wrote on Twitter.

The Office of the Director of National Intelligence (ODNI) and the ICIG didn’t respond when asked when the new form became official, who approved it, why the change was made, and if the process for handling complaints featuring second-hand information has changed.

House lawmakers on Sept. 30 issued a preservation order for all the records connected to changes made to the complaint form.

“[The] timing of the removal of the first-hand information requirement raises questions about potential connections to this whistleblower complaint,” Republican Reps. Devin Nunes (R-Calif.), Kevin McCarthy (R-Calif.), and Jim Jordan (R-Ohio) wrote in a letter to ICIG Michael Atkinson.

“This timing, along with numerous apparent leaks of classified information about the contents of this complaint, also raise questions about potential criminality in the handling of these matters.”

The attorneys for the anonymous whistleblower didn’t respond when asked why the complaint about the president was filed with the ICIG.

As part of their impeachment inquiry, congressional Democrats are working with the whistleblower’s attorney to set up a time and place for testimony, according to Zaid.

“Discussions continue to occur to coordinate & finalize logistics but no date [and] time has yet been set,” Zaid wrote on Twitter on Sept. 29.

Trump and Republicans have decried the impeachment probe, calling it another attack on the president by the Democrats.

The whistleblower’s complaint centers around a call between Trump and Zelensky in which the president asks the Ukrainian leader to look into potential misconduct by former Vice President Joe Biden and his son, Hunter Biden. The whistleblower alleges that Trump’s request amounted to a potential violation of campaign finance laws because Trump purportedly used his office to ask for an investigation into an election opponent. The Department of Justice reviewed the allegation and determined that no further action was necessary.

In videotaped remarks, Joe Biden spoke about forcing Ukraine to fire its top prosecutor by withholding $1 billion in loans. The prosecutor was at the time investigating Burisma, a gas company for which Hunter Biden served on the board of directors. Hunter Biden received $50,000 per month in compensation.

Before the transcript of the call or the whistleblower’s complaint were made public, Biden accused Trump of asking Ukraine for help.

“Desperate Donald Trump knows that I can beat him, so now he’s enlisting the help of a foreign government—once again. It’s an abuse of power and violates every basic norm of the presidency,” Biden wrote on Sept. 21. “We cannot give him four more years in the White House.”

The former vice president appears to have been relying on a media report based on anonymous sources who claimed, without evidence, that Trump made a mysterious promise to Zelensky and mentioned Biden on the call eight times. These and other media claims have been debunked by the release of the transcript and the complaint.