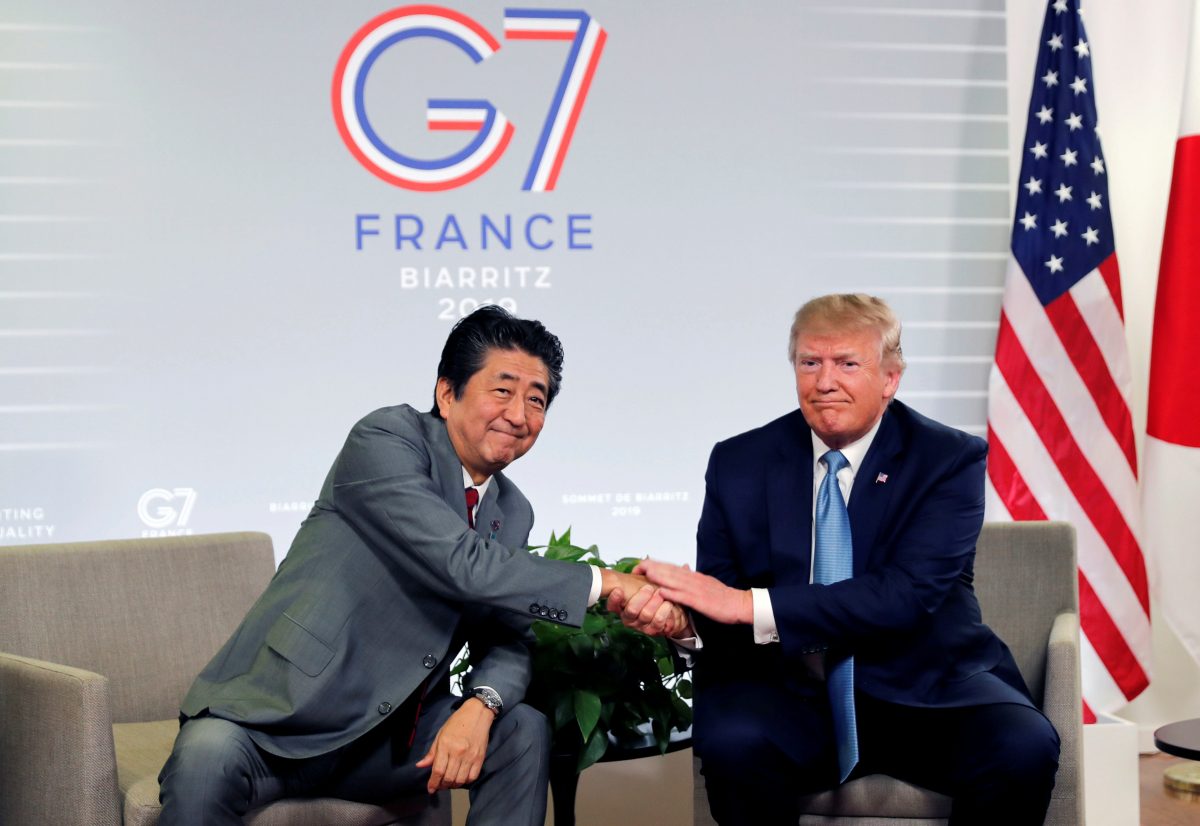 The United States and Japan reached an agreement on the core principles of a trade deal during the G-7 summit in France on Aug. 25.

President Donald Trump and Japanese Prime Minister Shinzo Abe announced the agreement to reporters in Biarritz, France. Trump said the two nations agreed to “every point” of the deal, and indicated they plan to sign the formal agreement on the sidelines of the United Nations General Assembly in New York in late September.

“This is a tremendous deal for the United States,” Trump said.

“If we are to see the entry into force of this trade agreement, I’m quite sure that there will be the immense positive impact on both the Japanese as well as American economies,” Abe said.

According to U.S. Trade Representative Robert Lighthizer, the deal includes agreements in the areas of agriculture, industrial tariffs, and digital trade.

Lighthizer said the deal will affect roughly half of the $14 billion in agricultural products that Japan imports every year. The deal will benefit U.S. producers of beef, pork, wheat, dairy, wine, and ethanol, Lighthizer said. Japan also agreed to buy an excess of U.S. corn that was a result of the trade war with China. Abe said Japan is dealing with the effects of insect pests on crops, creating a need to look for additional product overseas.

“It will lead to substantial reductions in tariffs and non-tariff barriers across the board,” Lighthizer said.

“And I’ll just give you one example: Japan is, by far, our biggest beef market. We sell over $2 billion worth of beef to Japan. And this [will] allow us to do with lower tariffs and to compete more effectively with people across the board, particularly the TPP countries and Europe.”

Trump told reporters that tariffs on Japanese car imports will remain the same.

Lighthizer called the digital and e-commerce part of the deal “the gold standard of an international agreement.”

“So the key mission for both myself and Ambassador Lighthizer is to complete the remaining work as soon as possible,” Motegi said.

Japan is the third-largest economy in the world, in terms of total gross domestic product. In 2018, U.S. exports to Japan totaled $120 billion; imports totaled $177 billion. Japan is the fourth-largest export destination for the United States.

The biggest U.S. exports to Japan in 2018 were mineral fuels, machinery, optical and medical instruments, aircraft, and electrical machinery. The United States imports products from similar categories from Japan.

“The significance of this achievement cannot be over-emphasized,” Motegi said.