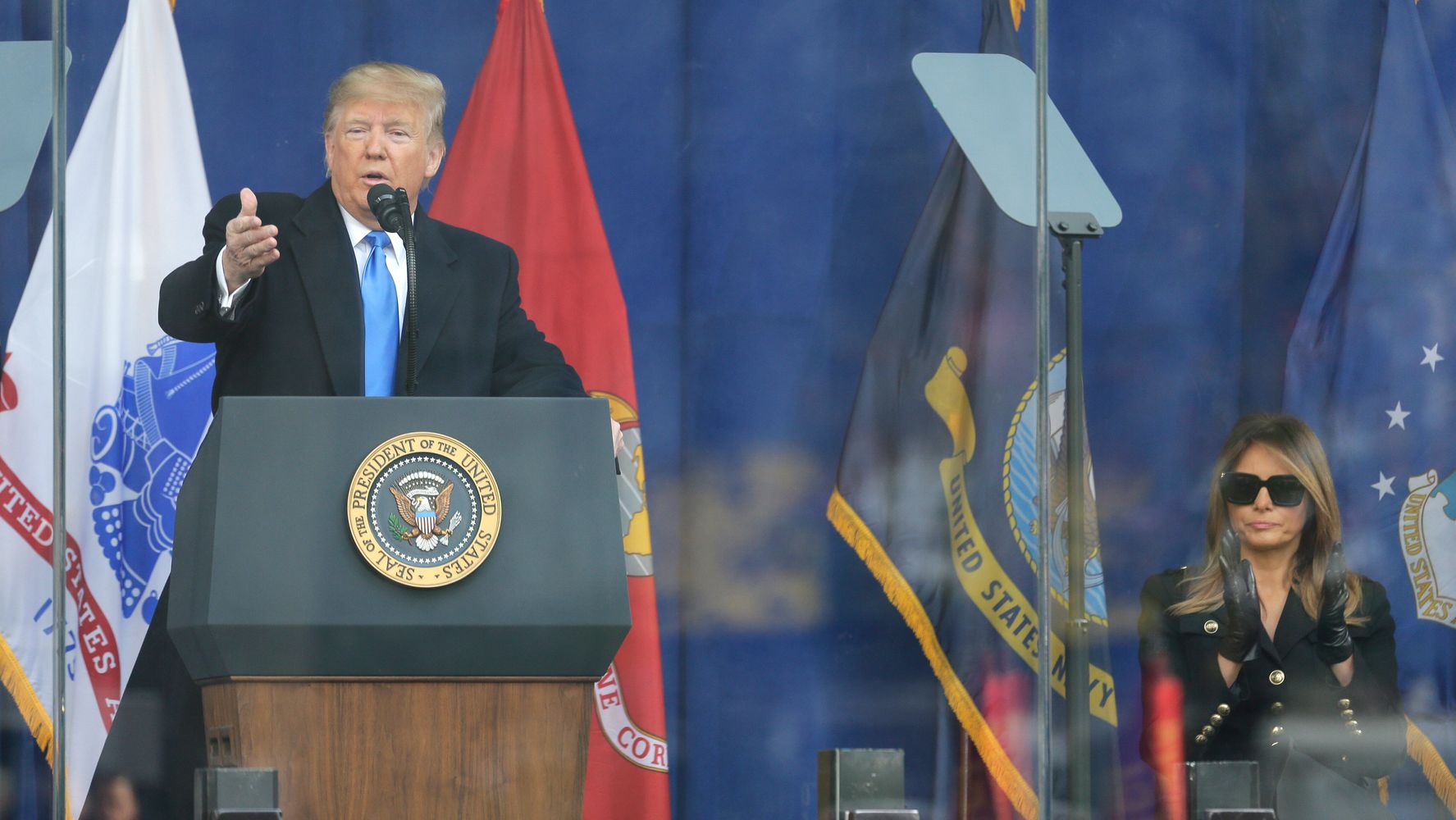 NEW YORK ― President Donald Trump may have been a lifelong New Yorker until recently, but the city he once called home didn’t quite welcome him with open arms on Monday.

For the first few minutes of Trump’s speech in Manhattan’s Madison Square Park ahead of the 100th annual Veterans Day Parade, attendees could hear protesters outside the ceremony chanting “lock him up” and “traitor.”

To his left, luxury high-rise condominiums towered over the park with signs on some windows spelling out “IMPEACH” and “CONVICT” in massive black letters.

Noticed these signs in windows of building by Madison Square Park where a modest crowd is waiting to get inside for Trump’s Veterans Day Parade speech. pic.twitter.com/HsfYxH2KLL

Phone mic mostly picked up Trump speaking, but can hear the “lock him up” chants in the background somewhat. pic.twitter.com/8zS2KWeAA9

Trump, the first sitting president to attend the Veterans Day Parade in New York City, did not acknowledge the protests.

“To every veteran here with us, to the thousands preparing to march on Fifth Avenue ― it’ll be really something ― and to the 18 million veterans across our country, the first lady and I have come to express the everlasting love and loyalty of 327 million Americans,” the president told the crowd of about 200.

Initial reports indicated Trump would lay a wreath after his speech at the Eternal Light Memorial, but he and the first lady watched the ceremony from behind glass on the stage.

Outside the park, Veterans Day Parade attendees ― a mix of veterans and their families, Trump supporters and anti-Trump protesters ― lined the streets of the parade route.

Janet Gonzales, 85, said she has a long list of reasons why she came out to protest Trump on Monday, including his “upside down” foreign policy in the Middle East.

Asked what she would say to Trump if she met him, she said, “Fuck you.”

Only about 200ish people were allowed inside Madison Square Park for Trump’s speech. A mix of protesters and his supporters lined up outside the park and along the Veterans Day Parade route. pic.twitter.com/goBm12mAwE

Trump has been met with a mix of boos and cheers at several recent events, including at Game 5 of the World Series at Nationals Park in Washington last month and a UFC fight in New York earlier this month.

Former Army Maj. Gary Canns, 68, of Manhattan, said he attended the parade to honor his fellow veterans. But Trump, who officially declared himself a Florida resident last month, isn’t a source of hometown pride for Canns.

“I’m a New Yorker and I’m a little ashamed that we’re giving the world candidates like [former New York Mayor Michael] Bloomberg and Trump,” Canns said. “Why can’t we come up with someone a little more inspiring?”

Others, like Diane Atkins of Brooklyn, embraced the president’s roots.

“Every New Yorker should be grateful that the president of the United States came to show his respect to the veterans,” said Atkins, wearing a red Trump shirt and matching red nails. “I think everybody should just put their politics aside … for today. You can hate on him tomorrow if you want, but just come out here, be an American.”

“Every New Yorker should be grateful that the president of the United States came to show his respect to the veterans. … You can hate on him tomorrow if you want but just come out here and be an American.” pic.twitter.com/WsN2pxU2jN