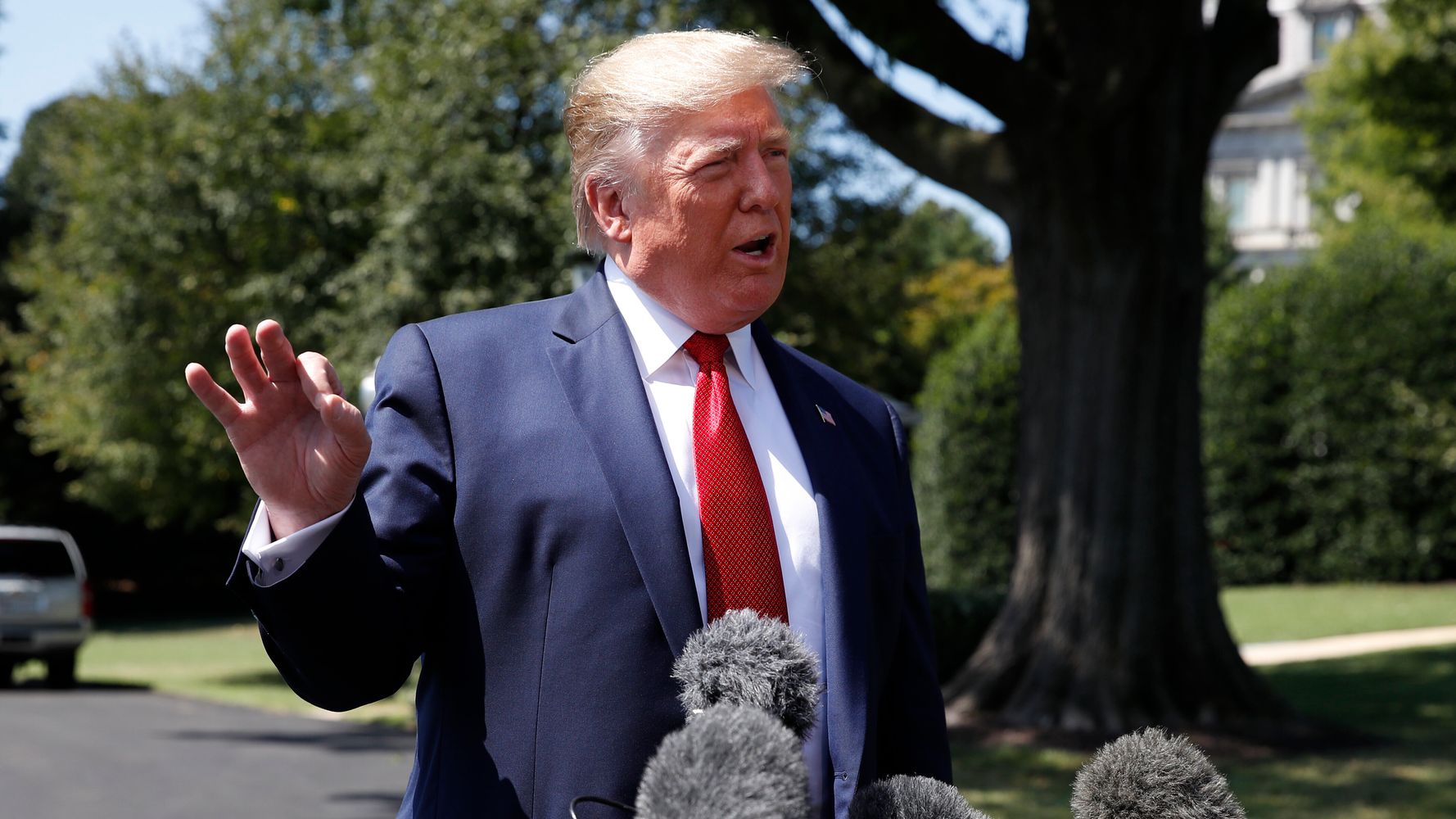 President Donald Trump on Wednesday doubled down on his anti-Semitic attacks against Jewish Democrats, claiming anyone who votes for a Democrat is “disloyal” to Israel and the Jewish people.

“If you vote for a Democrat, you’re being disloyal to Jewish people and you’re being very disloyal to Israel,” the president told reporters outside the White House. “Only weak people would say anything other than that.”

“In my opinion, the Democrats have gone very far away from Israel,” he said.

Me: “To whom are American Jews being disloyal by voting for Democrats?”@realDonaldTrump: “I have been responsible for a lot of great things for Israel…”
Me: But American Jews are American, sir.”
Trump: “Wait a minute. No president has done what I’ve done.” pic.twitter.com/6h5oz4tnQN

His statement echoed comments he made a day earlier while railing against Democratic Reps. Rashida Tlaib of Michigan and Ilhan Omar of Minnesota, two of the Israeli government’s sharpest critics in Congress.

“I think any Jewish people that vote for a Democrat, I think it shows either a total lack of knowledge or great disloyalty,” Trump said Tuesday.

Democrats and Jewish leaders were quick to condemn the president for invoking the anti-Semitic “dual loyalty” trope, which accuses Jewish Americans of having dual loyalties to the U.S. and Israel.

Nearly 80% of Jewish voters in the U.S. voted Democratic in the 2018 midterm elections, according to the Pew Research Center.

“We are sick and tired of Trump’s repeated use of anti-Semitic tropes and his inciting of hate and violence against Jews,” the Jewish Democratic Council of America tweeted Wednesday. “The Jewish community is less safe today because of Donald Trump.”

Trump told reporters Wednesday that he hasn’t heard anyone call his claim anti-Semitic.

His attacks on Jewish Democrats follow Israel’s decision to bar Tlaib and Omar from visiting the country at Trump’s behest. The freshmen lawmakers, who last year became the first Muslim women elected to Congress, had planned to travel to the West Bank and East Jerusalem this month, but Israeli Prime Minister Benjamin Netanyahu announced last week that they would not be allowed in because they support the pro-Palestinian boycott, divestment and sanctions movement.

Trump, who has a history of making anti-Semitic comments, has falsely accused Tlaib and Omar of being “anti-Semites” and “pro-terrorist” because of their support for Palestinian rights and criticism of Netanyahu.

Earlier Wednesday, the president quoted in a tweet Newsmax TV host Wayne Allyn Root, a known conspiracy theorist, who claimed Israelis love Trump “like he’s the King of Israel” and the “second coming of God.” (Jews do not believe in a second coming.)

“Thank you to Wayne Allyn Root for the very nice words,” Trump wrote in his tweet. “Wow!”

….like he’s the King of Israel. They love him like he is the second coming of God…But American Jews don’t know him or like him. They don’t even know what they’re doing or saying anymore. It makes no sense! But that’s OK, if he keeps doing what he’s doing, he’s good for…..

…..all Jews, Blacks, Gays, everyone. And importantly, he’s good for everyone in America who wants a job.” Wow! @newsmax @foxandfriends @OANN

While speaking to reporters Wednesday about his trade war with China, Trump looked up at the sky and said he’s “the chosen one.”

Trump ignored shouted questions from a reporter about whether he believes he is “the second coming of God.”