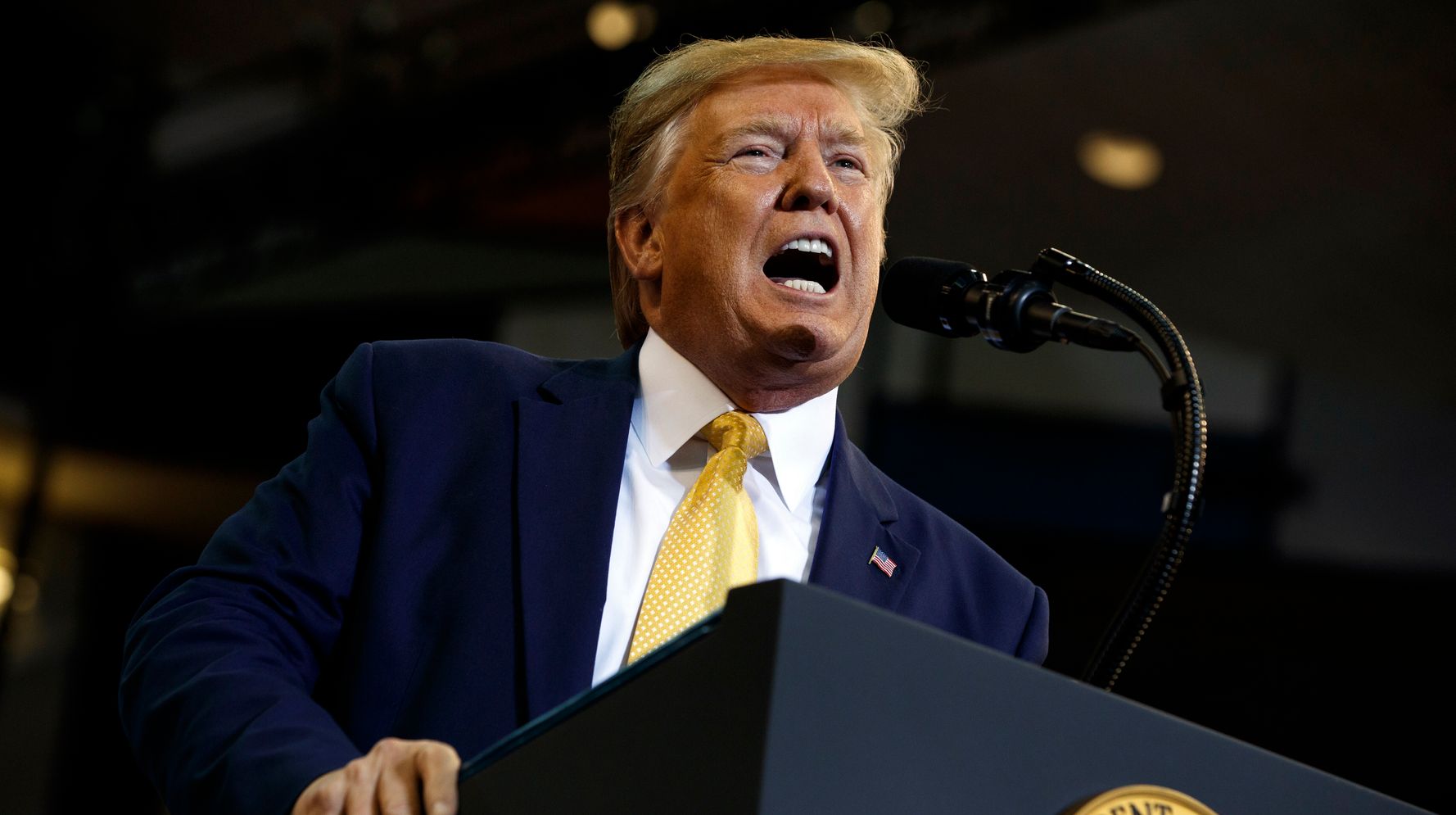 LAKE CHARLES, La. (AP) — President Donald Trump on Friday pressed his argument that the House impeachment inquiry is nothing more than a new attempt to overturn his election based on “a lot of crap.”

Trump found a sympathetic audience in Louisiana, where an arena packed with his supporters roared at his profane denunciations of the proceedings hundreds of miles away in the nation’s capital.

“They’ve been trying to stop us for more than three years with a lot of crap,” he said, referring to the investigation into Russian election interference that concluded earlier this year.

“They know they can’t win on Election Day so they’re pursuing an illegal, invalid and unconstitutional, bulls―- impeachment,” the president thundered at his second political rally in as many days.

Trump also pressed his unproven claims against Democratic presidential candidate Joe Biden and his son Hunter, who sat on the board of a Ukrainian gas company when Biden was vice president.

Trump complained about a double standard in news media coverage. He said if any of his children were similarly accused, the media wouldn’t call the allegations unsubstantiated — “They would be saying, ‘Where’s the nearest cell?’”

There has been no evidence of wrongdoing by either Joe Biden or Hunter Biden.

House Democrats have opened an impeachment inquiry over Trump’s dealings with Ukraine, in which he asked that country’s president during a telephone call in July to investigate Biden. An intelligence community whistleblower complained that Trump was abusing his office for personal political gain.

Trump insists he didn’t do anything wrong and has called the conversation with Ukrainian President Volodymyr Zelenskiy “perfect.”

Zelenskiy has said he was not pressured by Trump.

Trump claimed Democrats are “rage filled” and have opened the impeachment inquiry because they “have gone completely insane” in their “nonstop battle” to overturn the 2016 presidential election result.

“Nancy Pelosi hates the United States of America, or she wouldn’t be doing this,” Trump said of the Democratic speaker of the House, who had long resisted calls to initiate impeachment proceedings.

Pelosi has said “no one is above the law” and Trump must be held accountable for actions that she says jeopardize U.S. national security, the integrity of American elections and the Constitution.

Trump came to Louisiana to unite a squabbling Republican Party against the Deep South’s only Democratic governor, hoping to keep John Bel Edwards from notching a primary win in Saturday’s election.

Republican loyalties are split between two major candidates: Ralph Abraham, a third-term congressman and physician from rural northeast Louisiana, and Eddie Rispone, a businessman and longtime political donor from Baton Rouge who is making his first bid for office.

“Tomorrow, you’ve got to vote John Bel Edwards out,” Trump said, criticizing the Democrat as bad for the state. “If he doesn’t get 50%, then one of our two great candidates will win that.”

The president is not endorsing either GOP candidate to maximize chances that Edwards will fall below the 50% vote threshold needed to avoid a runoff, according to a White House aide and a campaign aide, both of whom asked for anonymity because they were not authorized to discuss strategy. Trump plans to endorse whichever GOP candidate makes it to a runoff against Edwards, the aides said.

In Louisiana, all candidates run against each other, regardless of party, on the same primary ballot. With polls showing Edwards well in the lead, national Republicans have bombarded the state with millions in advertising and visits from Trump, Vice President Mike Pence and Donald Trump Jr. to urge anti-Edwards votes and force a Nov. 16 runoff.

Trump acknowledged the reality of college football season in the South and urged everyone to vote before they head to Saturday’s big matchup between Louisiana State University and Florida State.

He said people should vote before they go to the game, otherwise they will feel guilty and “it will ruin your entire afternoon.”

Trump called Edwards “a liberal Democrat who has sold you out,” even though Edwards isn’t the type of liberal with whom the president usually clashes.

Trump also kept up a sports theme by inviting the winners of the 2019 Little League World Series to the stage.

Trump met in the Oval Office earlier Friday with members of the Eastbank All-Stars and invited them to fly home aboard Air Force One. The team is based in suburban New Orleans.

Trump said he had become accustomed to watching Japan win the event. “But this year you have the world champions,” he told the rally crowd before introducing the players one by one.