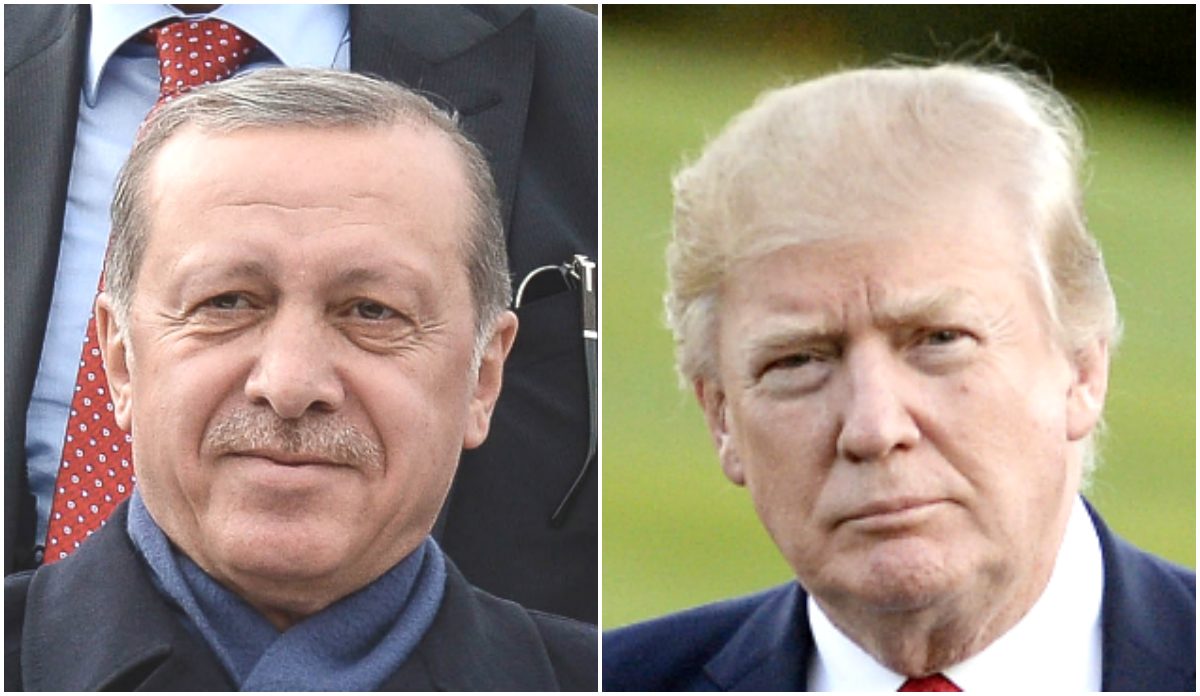 The letter—shared on Twitter by Trish Regan of FOX business and verified by The White House—appears to be consistent with Trump’s rather unconventional approach to politics.

Dated Oct. 9, Trump uses an informal tone as he warns Erdogan that he will destroy Turkey’s economy if the situation in Syria is not resolved in a “humane way.”

Trump also urges his Turkish counterpart not to “be a fool” amid the ongoing tensions between Turkey and Syria.

Seemingly wanting to cut straight to the point, the letter begins: “Dear Mr. President. Let’s work out a good deal!”

“I’ve already given you a little sample with respect to Pastor Brunson. I have worked hard to solve some of your problems. Don’t let the world down. You can make a great deal.

EXCLUSIVE: I have obtained a copy of ⁦@realDonaldTrump⁩’s letter to #Erdogan. ⁦@POTUS⁩ warns him to not “be a tough guy! Don’t be a fool!” Says he could destroy Turkey’s economy if #Syria is not resolved in a humane way. Details tonight at 8pm #TrishRegan #FoxBusiness pic.twitter.com/9BoSGlbRyt

“General Mazloum is willing to negotiate with you, and he is willing to make concessions that they would never have made in the past. I am confidentially enclosing a copy of his letter to me, just received.”

Trump’s letter to Erdogan comes after a warning he tweeted last week not to move forward with an offensive against the Syrian Kurds following the withdrawal of U.S. troops from the region.

However, it appears the president was unswayed by the letter, as the Turks went ahead to launch their offensive in north-eastern Syria just days later.

The move saw the Kurds seek assistance from Syrian leader Bashar Al-Assad and his Arab Socialist Ba’ath Party as they joined forces with his armed forced.

Trump has since imposed sanctions and visa bans on the Turkish government, calling on Ankara to stop the invasion.

The conflict has reportedly claimed the life of 11 civilians so far and resulted in the displacement of tens of thousands of people, the BBC reported.

Despite growing instability in the region, Trump, during an Oval Office meeting with Italian President Sergio Mattarella, branded his decision to withdraw the 50 U.S. troops in the region as “strategically brilliant” before claiming the Kurds were “much safer right now.”

“Syria is protecting the Kurds. That’s good,” he said.

Trump told reporters that if they examined history, the Kurds were “no angels,” before describing the escalating violence as a fight over sand that was of no concern to the United States.

His views are in direct contrast to the official assessment of both the state and defense departments, which claim that U.S. troops must remain in Syria to ensure that there is no resurgence of ISIS.

But the president has stood by his assessment.

“You have a lot of countries over there that hate ISIS as much as we do; in some cases, probably more.  So they can take care of ISIS,” he said.