US, Turkey Agree on Ceasefire in Syria as Kurd-Assad Alliance Blocks Turkish Offensive 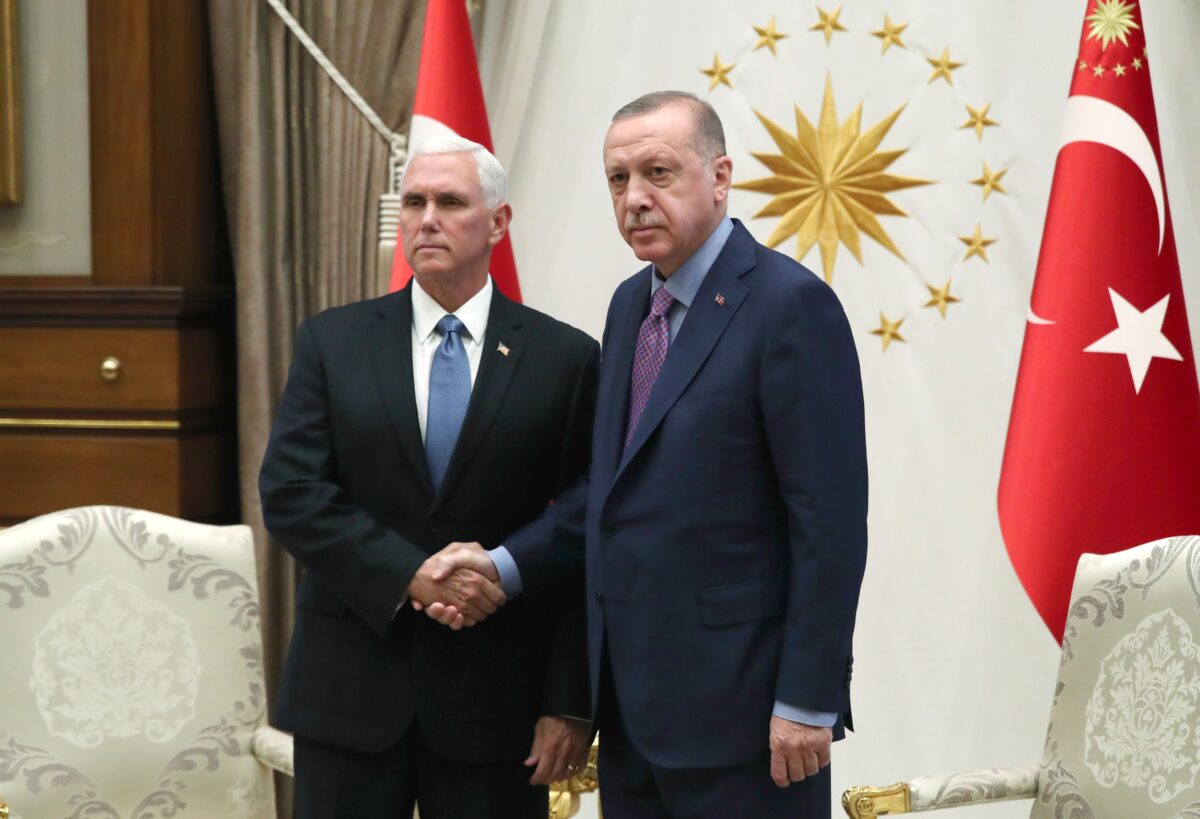 A United States delegation led by Vice President Mike Pence and Secretary of State Mike Pompeo negotiated with Turkish President Recep Tayyip Erdogan a five-day ceasefire in Syria to allow withdrawal of Kurdish forces, Pence said on Oct. 17. Turkey’s week-long military incursion in northern Syria, which it called “Operation Peace Spring,” was met with tough resistance from a new alliance between the local Kurdish forces and their previous enemy, the Russia-backed Syrian government.

“The Turkish side will pause Operation Peace Spring in order to allow for the withdrawal of YPG forces from the safe zone for 120 hours,” Pence told a news conference after more than four hours of talks at the presidential palace in Ankara.

“Great news out of Turkey,” President Donald Trump commented on Twitter, thanking Erdogan and adding that “Millions of lives will be saved!”

“This deal could NEVER have been made 3 days ago,” Trump said in a subsequent tweet. “There needed to be some ‘tough’ love in order to get it done. Great for everybody. Proud of all!”

Pence said U.S. forces in the region had already begun to facilitate a safe disengagement of YPG units.

The deal struck with Erdogan also provided for Turkey not to engage in military operations in the flashpoint Syrian border town of Kobani.

In exchange, the United States agreed to lift sanctions recently imposed on Turkey in response to the offensive.

Mazlum is willing to negotiate and “make concessions that they would never have made in the past,” President Donald Trump said in a letter to Erdogan on Oct. 9, the day the offensive launched.

No such negotiations are part of the ceasefire.

The prospect of negotiations with YPG may be a hard pill to swallow for Erdogan, since Ankara considers YPG to be an offshoot of the Kurdistan Workers’ Party (PKK), a terrorist group that has waged a decades-long insurgency in Turkey. Mazlum himself used to be a part of the PKK insurgency.

Even with the new agreement, Turkey doesn’t recognize YPG as legitimate, Turkish foreign minister Mevlut Cavusoglu indicated, saying on Oct. 17 the agreement is more of a pause, rather than a ceasefire, since a ceasefire can only happen between the two legitimate sides.

Ankara said it moved in to expel the YPG from an approximately 200-mile strip in northern Syria east of the Euphrates River and establish an 18-mile “safe zone” along the border for resettling millions of Syrians that fled to Turkey to escape the Syrian civil war.

By Oct. 17, over 670 “YPG/PKK terrorists” have been “neutralized,” implying they surrendered, were killed, or captured, Anadolu Agency reported. Over 470 square miles of territory have been cleared of the YPG, Erdogan said the day before.

But the offensive seems to have met with tough resistance, based on information from the Rojava Information Center (RIC), a group of volunteers monitoring the situation in northern Syria.

The United States had backed the roughly 70,000-strong YPG since 2014 with training, light arms, and air support to fight the ISIS terrorist group. But the United States refused to provide heavy armaments due to YPG’s link to the PKK. As such, the YPG would have been easy pickings for Turkish artillery and air forces.

The Syrian military, led by President Bashar al-Assad and backed by Russia and Iran, had the resources to push the Turks away, but they lacked presence in the north where the YPG had fought off the government forces in the ongoing civil war and established an autonomous region.

Two days after Turkey announced the offensive was imminent, Trump announced a withdrawal of a few dozen U.S. troops stationed in northern Syria, making clear the United States has no interest in helping the YPG fight Turkey, a NATO member.

After Turkey started moving in, shelling Syrian territory along the border, the YPG quickly hammered out a military agreement with Assad, who immediately moved troops north with support of the Russian air force.

It seems Turkey mostly delegated the fighting on the ground to its Syrian proxies who call themselves Syrian National Army (SNA), to which Turkey provides artillery and air support.

The proxies tried to capture areas around Manbij and Ain Issa, towns about 20 miles from the border, but were repeatedly repelled by Assad’s forces and the YPG coalition (SDF), who now fight side-by-side, according to RIC researcher Robin Fleming.

“Backed up by Syrian aircraft the Syrian Army engaged in clashes between the SDF and Turkish proxy forces both in villages in the northwest between Kobane and Ain Issa and east of Ain Issa,” Fleming said in an Oct. 17 email. “The SDF and the Syrian Army established a string of joint positions around Ain Issa, equipped with tanks and artillery.”

The Syrian military, it appears, now holds a position in Kobane, while the Turkey proxy forces hold Jarabulus west of Kobane and Tell Abyad to the east.

“The SDF and the Syrian Army were able to regain at least ten villages north of Ain Issa that have been under the control of Turkish proxy forces coming from Tel Abyad,” Fleming said, referring to an unnamed local source.

“For three days there has been heavy war in the region around Ain Issa and Tel Abyad, especially since the Syrian Army joined,” an unnamed person in Ain Issa told RIC.

Turkey tried multiple times to cut off the road between Ain Issa and Kobane, but failed, the person said.

“Now the airspace is in the hands of Russia, that’s why there are all the time Russian and Syrian airplanes and surveillance aircraft over this region in the air. Once these airplanes came there were no Turkish airplanes anymore in this region.”

The Syrian military, it seems, was also able to end the fighting around Manbij on the west side of Euphrates.

“Peaceful situation, no airplanes,” an unnamed person told RIC on the night of Oct. 16. “The way between Kobane and Manbij is open and nothing is happening. West of Manbij there are still clashes between Turkish proxy forces and the Manbij Military Council because of attempts by Turkish proxy forces to get into the villages. There are also Russian airplanes flying. The Syrian Army forces are along the border, from Sacur until Erime.”

The Assad-YPG alliance prompted some media speculation about the future of the Kurdish autonomy. Fleming said, however, that so far the cooperation seems limited to military actions to protect the border.

“We spoke to the local administration in Ain Issa who informed us that the presence of the Syrian Army doesn’t have any impact on their work, which is continuing as before,” he said.

It remains to be seen, he noted, how the agreement will develop.

“All civil institutions are still in the hands of the Autonomous Administration,” he said. “Both the SDF and the Syrian army have fought together in Manbij. And the Syrian Army has moved to the border with the intention to protect it but it does not have any official presence in cities in North and East Syria.”

While ISIS has been stripped of its territory, its sleeper cells still conduct terrorist attacks in the region. Thousands of ISIS prisoners are held in the area too.

The facilities were left under SDF control upon the U.S. withdrawal and SDF stated keeping them was no longer its priority upon the Turkish attack.

Trump suggested on Oct. 16 the Kurds may have let the prisoners escape intentionally “to make a little bit stronger political impact.”

He said the prisoners can be easily recaptured and any ISIS remnants can be eliminated by other forces in the region, including Russia, since they are all opposed to ISIS, though Turkey “a little bit less so.”

RIC previously said some former ISIS “elements” have joined the Turkish proxies. Those reports haven’t been confirmed pushed back Emre Kursat Kaya, Research Fellow at the Istanbul based Turkish Think Tank EDAM, in a prior interview.

Trump announced the start of a troop withdrawal from Syria in December 2018 upon declaring the end of ISIS’s self-proclaimed “caliphate.”

Trump said on Oct. 14 that the roughly 1,000 U.S. troops he had ordered out of Syria would remain in the Middle East to prevent an ISIS resurgence. Only a “small footprint” of forces will remain in Southern Syria, he said in a statement.

The United States maintains around 5,200 troops across the border in Iraq. Much of its campaign in Syria has been waged by warplanes flying out of Qatar and other locations in the Middle East.

The current conflict in Syria began in 2011 along with similar unrest in the Middle East during the Arab Spring protests. The Obama administration backed the opposition against Assad, trying to destabilize his regime, while Assad violently suppressed the protests against his regime. The resulting civil war created a breeding ground for terrorists, allowing for the rise of ISIS.

Venus Upadhayaya, Reuters, and The Associated Press contributed to this report.